ITALY ROILS GLOBAL CAPITAL MARKETS  WHAT NEXT? by Chris Vermeulen

After a fairly solid rally took place over the past few weeks in the US majors, fresh concerns originating from Italy roiled the markets early on Tuesday, May 29.  The concern is really related to the formation of a coalition government in Italy and the excessive debt issues plaguing Italy and many other European Union countries.  In our opinion, the European Union has a number of issues that are rearing their ugly heads and most of these are related to disparities between opportunities, capital flows, debt and consumer optimism related to the parity of the EU economic activities.  In other words, the squeaky wheel gets the grease.  Right now, Greece and Italy are the two squeaky wheels with Portugal, Cyprus and Belgium following right behind. 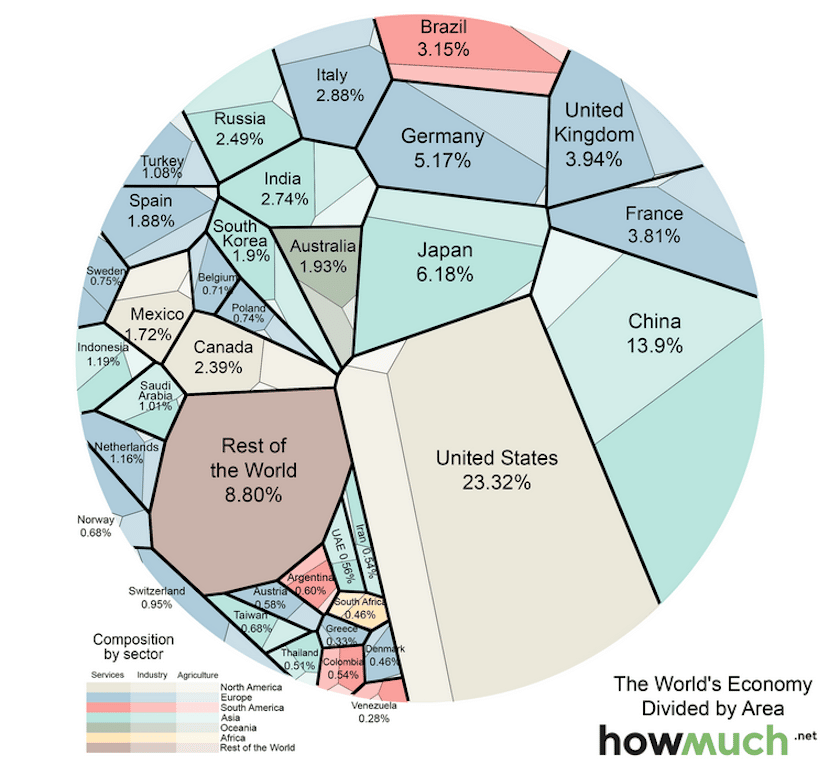 Italy makes up approximately 2.85% of the total global economy and Italy’s debt to GDP ratio in the European Union is second only to Greece.  When one considers the isolation factors that Italy is one country with less than 3% of total global economic output – these issues can be perceived as relatively small.  Yet the issue is much bigger than just one or two countries at the moment.  The lack of economic opportunity is one of the major driving forces these individual countries are dealing with.

Additionally, debt levels and debt repayment concerns are starting to weigh heavily on many of these countries.  The opportunities that the European Union was supposed to allow have turned into the heavy burden of slogging through an extended economic malaise with growing debt obligations and inflation issues. 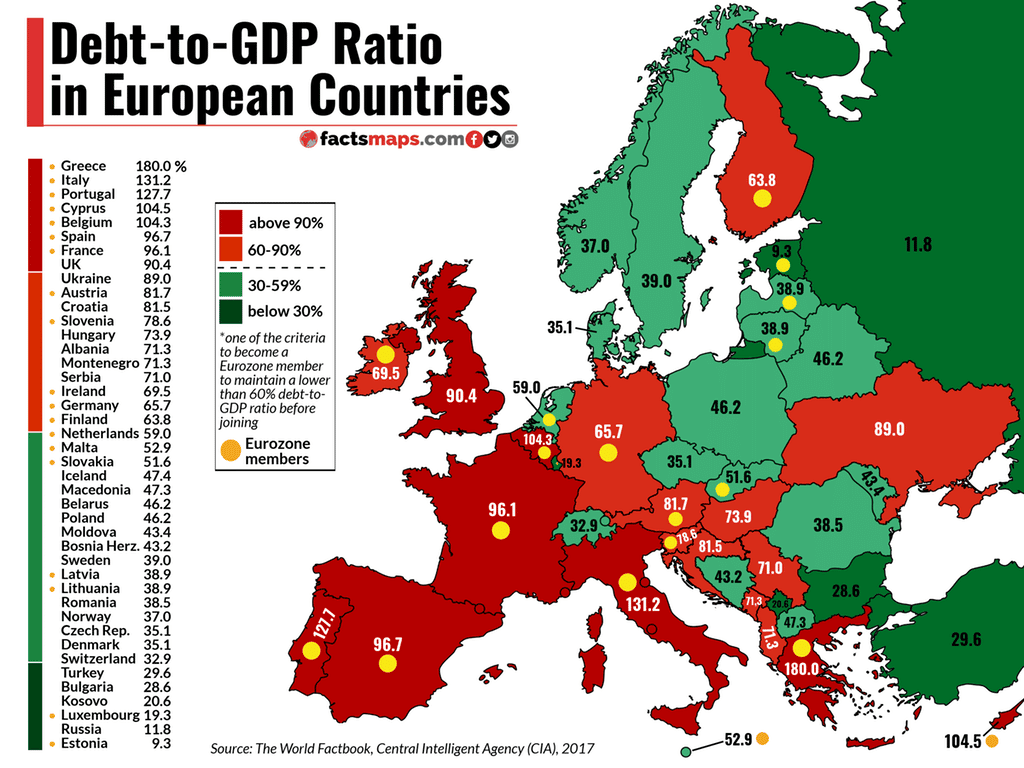 The current concern revolves around the inability for Italy to form a coalition government.  This translates into concerns that another election event may push Italy further away from the European Union and Italians continue to get frustrated with their debt levels, political leadership and future opportunities.  Another election in Italy may not seem concerning to most, but what hangs in the ballot is the potential that Italy could bail on the European Union, default on debt and throw the EU into a death spiral… sounds fun – huh?

Our opinions regarding this matter are early stage guesses at this point, but we’ll share them with you all the same.  The turmoil that is being created by Italy will likely subside over the next few days and more core economic factors will begin to drive market price activity – especially in more established global markets.  This rotation, although unexpected, is actually a very healthy form of price movement.

If price recovers from this move quickly, then we consider this an “isolated economic event cycle” – much like tossing a rock into a pond.  Without that event, the ripples caused by the evet would typically not be an issue.  Therefore, once these ripples play out, the markets will go back to doing what they were doing to begin with.

Secondly, the European Union needs to address what we are terming the “disparity issues” that are present within the EU.  Without addressing this in a structured and organized format, more of these issues will continue to rise up over the next 8+ years.  The leading economic producers in the EU are capable of reducing these debt levels and structuring some form relief effort to assist in developing greater opportunities for all member nations.  Yet, it appears the EU leaders have not made the decision to address these issues in a positive form.

In terms of the US, UK and Italian markets, expect this rotation to be fairly short lived and, as we suggested earlier, more of an isolated event cycle in the longer term.

Italy will likely continue to see some pricing pressure as this political turmoil plays out. Pay attention to any news events as we could see more concerning news over the next 30+ days out of Italy and the EU. 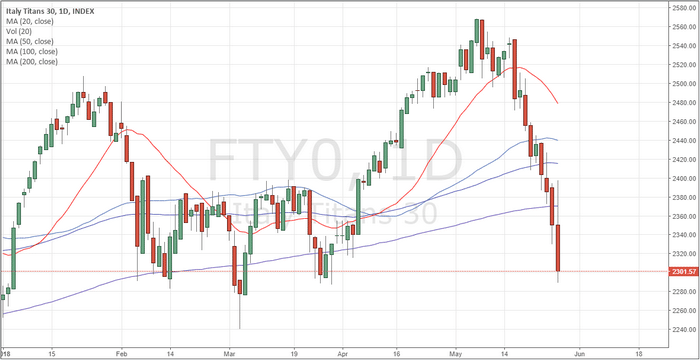 The DAX reacted in a muted form to this new.  Vastly different than the US markets.  It appears that most of the established EU economies are not very concerned about Italy’s worries. 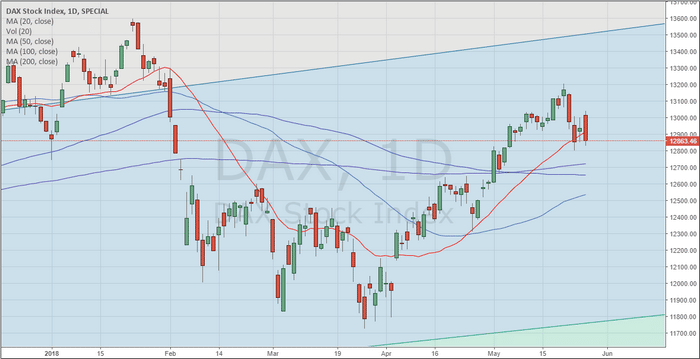 The US markets were off nearly 2% today – which seems excessive considering the US economic output is nearly 10x that of Italy.  We believe this is a massive price overreaction to a localized situation playing out in Europe.  Yes, there is some concern that it could spread into other nations, but right now this is more of a “what if something terrible happens” type of move. 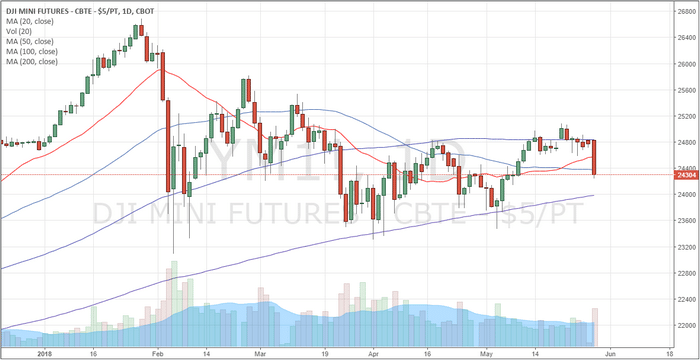 Over the last week or so, we had a long conversation about what we call the “Global Financial Reset” event and spoke with someone in the EU that has direct knowledge that this type of event is being actively discussed between EU leaders.  How it will play out is anyone’s guess.  What it will likely do is to centralize some debt obligations and default on others – creating a more suitable “reorganization” of the EU for future growth.  Think of this like a reorganization bankruptcy in the US.  The idea is to default on certain debt in a manner that, through reorganization, the nations can emerge stronger, healthier and more opportunistic than before.

Right now, our advice it to be prepared for extended price rotation and the potential for a “capital flight” event (money moving out of fragile economies and into more stable economies).  Watch Gold and Silver as these metals will likely advance as fears materialize, but if the dollar continues its strong climb metals may continue to be muted for the time being.

Our belief is that the US market will be the safe-haven location for a massive capital migration over the next 6+ months.  This means the US markets should continue to melt-up as these global concerns play out.  Why?  Because capital is always searching for the best returns and safest locations to operate within.  Once the EU issues begin to resolve themselves, then capital will move back into these markets for the opportunities available there.

Remember, in the US markets, until the recent February lows are breached, we should continue to see this market with an upward bias. Its impossible to know when big market moving news will hit, and it can certainly be tough to trade round and big volatility spikes can easily shake us out of good positions.

The key is to step back, and look at the bigger picture like in this article. Greece and Italy really are just a few drops in the bucket in the grand scheme of things but we don’t want to start seeing a Domino effect where more countries start to collapse/default.

We have been waiting for these types of events to start bubbling to the surface and this could be the start of a major financial struggle for the world if countries can’t get their debt issues resolved. The good news is that whatever happens there will some incredible opportunities for us as traders and long term investors with our Wealth Building Newsletter trading service.