Fair value is around 3950ish based on the current macroeconomic data/environment. So, the market is pricing in a "soft landing" at this point.

While it is possible that this happens, it has yet to be seen.

The question that is to be answered is how deep the slowdown will be and how far is the Fed willing to go to kill off inflation. JOTLS is very interesting to look at with still over 10M jobs to be filled.

While the bargains were out there in TSLA, AAPL and other tech names just a short time ago, they are simply not as attractive at these price points. I do not see stock prices on sale right now based on the current data.

If the soft landing did happen, these names could not grow into these higher price points, but that is yet to be determined. Being a good investor/trader is about being adaptable and this environment it is crucial to do just that.

IT technicals are favoring some downward action or at least a pause.

Based, on the fact that market is priced to near perfection, I started shorting and will be looking for opportunities on the short side in IT.

Risk Windows and the Pause That Refreshes

According to my risk summation system, the days in the next week or so with the highest risk of a turn in or acceleration of the current trend in the DJIA are Tuesday Jan 31st, Wednesday Fed 1st and Monday Feb 6th.

Last week the Tuesday the 24th risk window had all the makings of a top, with double top action and a gap down, but nope, the bulls turned it back up the very next day, so chalk it up as a dud.  The jury is still out on the Friday the 27th risk window turn call.  Monday's action will determine its fate.  A Monday rally and it gets relegated to the dud pile too. 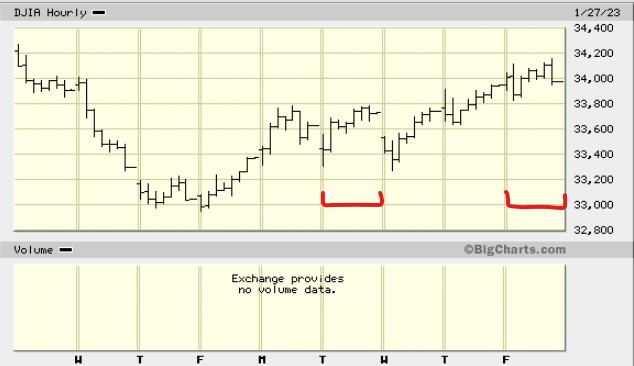 The Wednesday risk window this coming week coincides with the Fed conflab, at which I assume they will roll out the pause that refreshes, not just a tapper in the Fed funds rate increase to 0.25%, but some clear indication that maybe one more little one and that's it. If so, I expect that bit of good news to light the fuse on the blue "c" wave rocket up that I show in the EWave plot below.  Sure, J. Powell will talk tough, but actions speak louder than words, and a puny 0.25% increase tapper while every Treasury still yields less than the rate of inflation is not channelling fire breathing Volker, it's tiptoeing through the tulips with Arthur Burns.

The contracting triangle looking action in the DJIA has forced me to alter my short term EWave count just a tad as shown below.  Bigger picture, I still think that a large A-B-C three part corrective wave is being formed with the "A" wave complete at the October 2022 lows and the "B" wave up currently developing which should finish this coming spring.  Of course, if the DJIA rallies on Monday, the nice five part a-b-c-d-e contracting triangle thingy that I show below will not form.  If I'm right about the Fed pumping the market at the Wednesday meeting, the triangle "e" will have to finish by then anyway.   If the triangle ends Monday, I suppose the blue "b" wave will end where I show "c".  As I've said a hundred times before, EWave must only be done in pencil with an eraser at the ready. 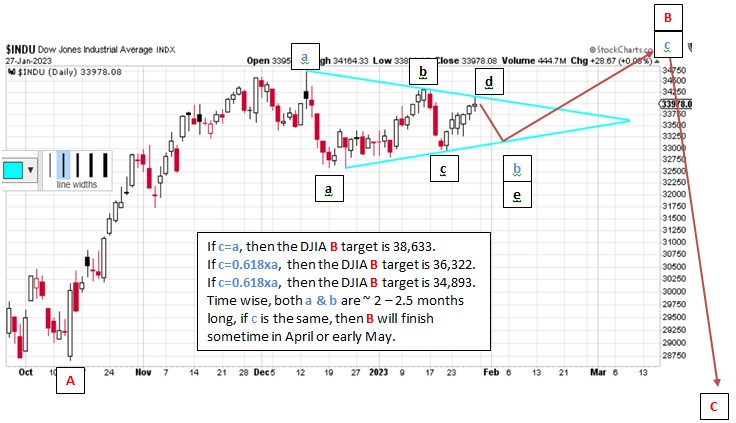 An early May completion of "B" would line up with the 3rd of May Fed meeting, which might be a real bell ringer if inflation starts to reaccelerate due to a premature Fed funds rate taper as I postulated above.

I also expect a turn of some sort in early March in the vicinity of the focus of the blue triangle in the plot above.  It's too early for the completion of the "B" wave, but maybe the 1 of the "c" which should have 5 parts.

Dow Utility Average...no great bears without them on board

So as of the close on Friday, The Utilities are once again looking like late to the party, near End of Stage 3 in the bull / bear cycle.

Stage 4 is the big plunge.

First we look at 2000-2003 cycle. As you can see Utes started their big Stage 4 decline WELL AFTER the rest of the market, but when the 150/200 combo rolled over, then the worst part of bear began.

And now, we look at today, with the Utes yet again late to the party, and 150/200 perhaps on the verge of another rollover.

And I do believe the decision to complete that rollover or not, could come as soon as next Monday...hence my seeming obsession with them over the last few weeks. I mean, why pay any attention to the Utes? Well...the above tells you why.

So...IF...we get hard down on the Utes next week, could be a very bad harbinger for bulls. But should they rocket launch up, then the "soft landing" might actually happen.

If the registration module isn't working for you, you can message us here or at admin@ this site and we'll set you up.

Remember, "Partially Long (or Short)" means less than your normal full position. E.g., If you typically use leverage, then 100% long would be "Partially Long".

and the stock market keeps rising

while most people expect a market drop....an old story. They create a wall of worries and then they take the opposite direction....