The market went according to expectations and projections in the second week of July after the first week's huge bull reversal week. The bulls were able to retain their bull train momentum from the prior week and managed to do a decent job on the standard continuation upside pattern demonstrated by the consecutive higher lows and higher highs on the micro charts.

For the most part it was just a typical perfect week following our 4-hour white line projection chart.  Initially rejected at the major 2800 level on the S&P 500, the bulls held the expected pullback with a low of 2765.75 on Tuesday night and eventually managed to wrap up the week around the highs at 2800 for the weekly candle.

With our upside thesis of two weeks ago fulfilled in fast manner, in which we noted we expected 75-100 ES points off the 2700-2720 support area, now the real fun begins as uncertainty and other factors begin to loom over our heads. Short-term, easy money is considered over and it seems like the next 30-40 points could determine the next 100-200 points of movement given the important resistance and target zone ahead around 2830-2840. The failure to reach or the success to fulfill should invalidate or confirm a lot of things for the rest of the week just judging on the momentum of the train.

Currently, the market is now testing the March highs in the 2800-2807 area, and the monthly candle is trying to really squeeze out of this range since the huge February monthly candle of 2837.25 -2529. If you recall, we had been treating the low of the year as in since March, and now the market is close enough to a fairly high enough backtest of the prior highs to attempt for new all-time highs.

Friday closed at 2804.25 at the highs of the week so the bulls did a wonderful job cementing the continuation week pattern.  With the market in trending mode, our 4-hour white line projection remains king for now as the market heads towards final 2830-2840 target zone.

Heading into this week, it’s more or less the same until the market could at least pierce below trending support levels to tell us otherwise. Immediate trending supports have moved up a bit again to 2792 and 2774 where bulls have an edge for now when above these immediately. Daily support is pretty much the same as the market is currently sporting an accelerated 8EMA upside like we noted last week so nothing has changed in that regard per momentum rules. (Bears need below 2774 to confirm a temporary top of sorts and another consolidation pattern likely begins on daily chart again.)

As noted above, with the easy money considered over, traders should remain a little more nimble and cautious this week. 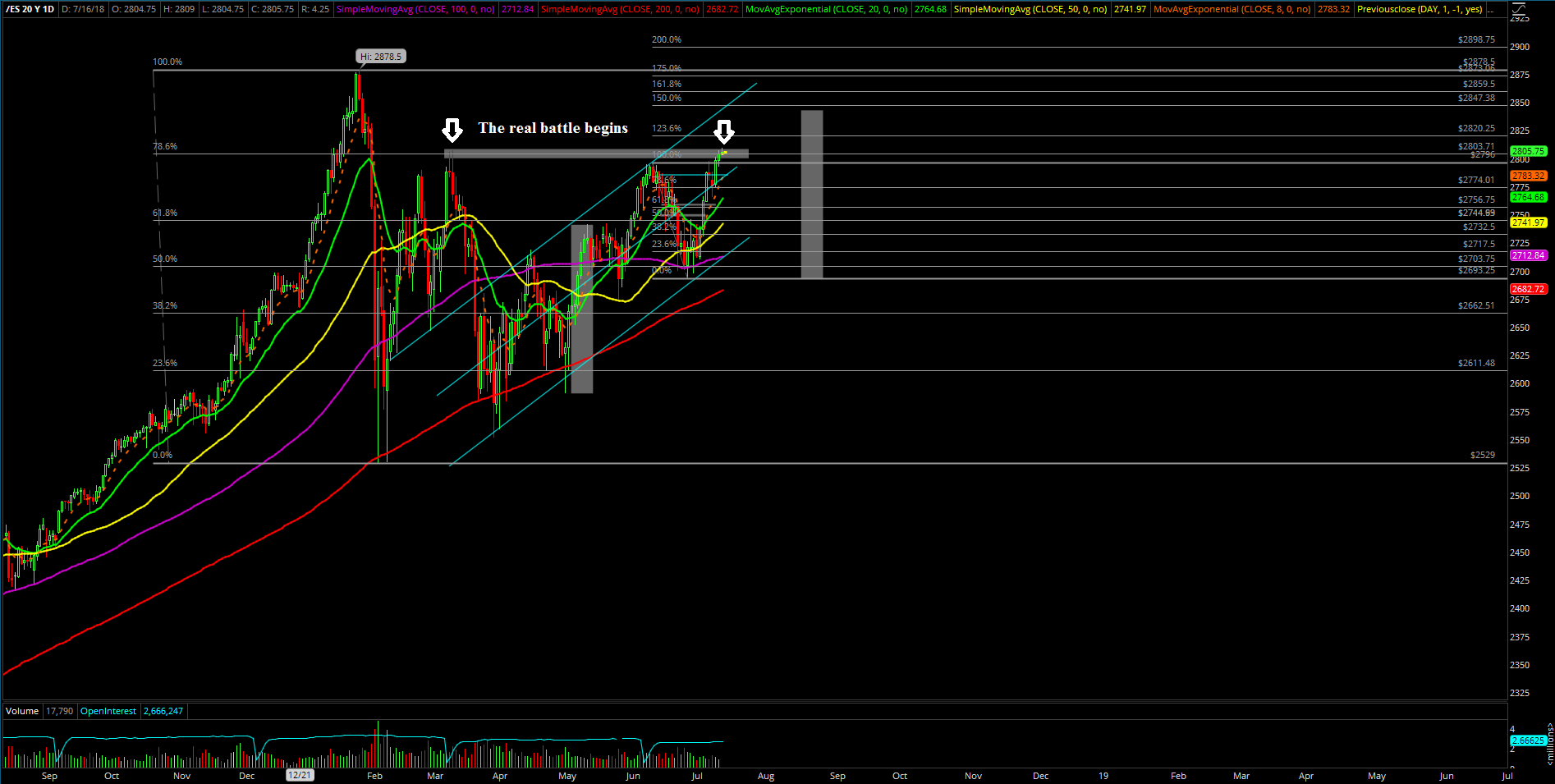 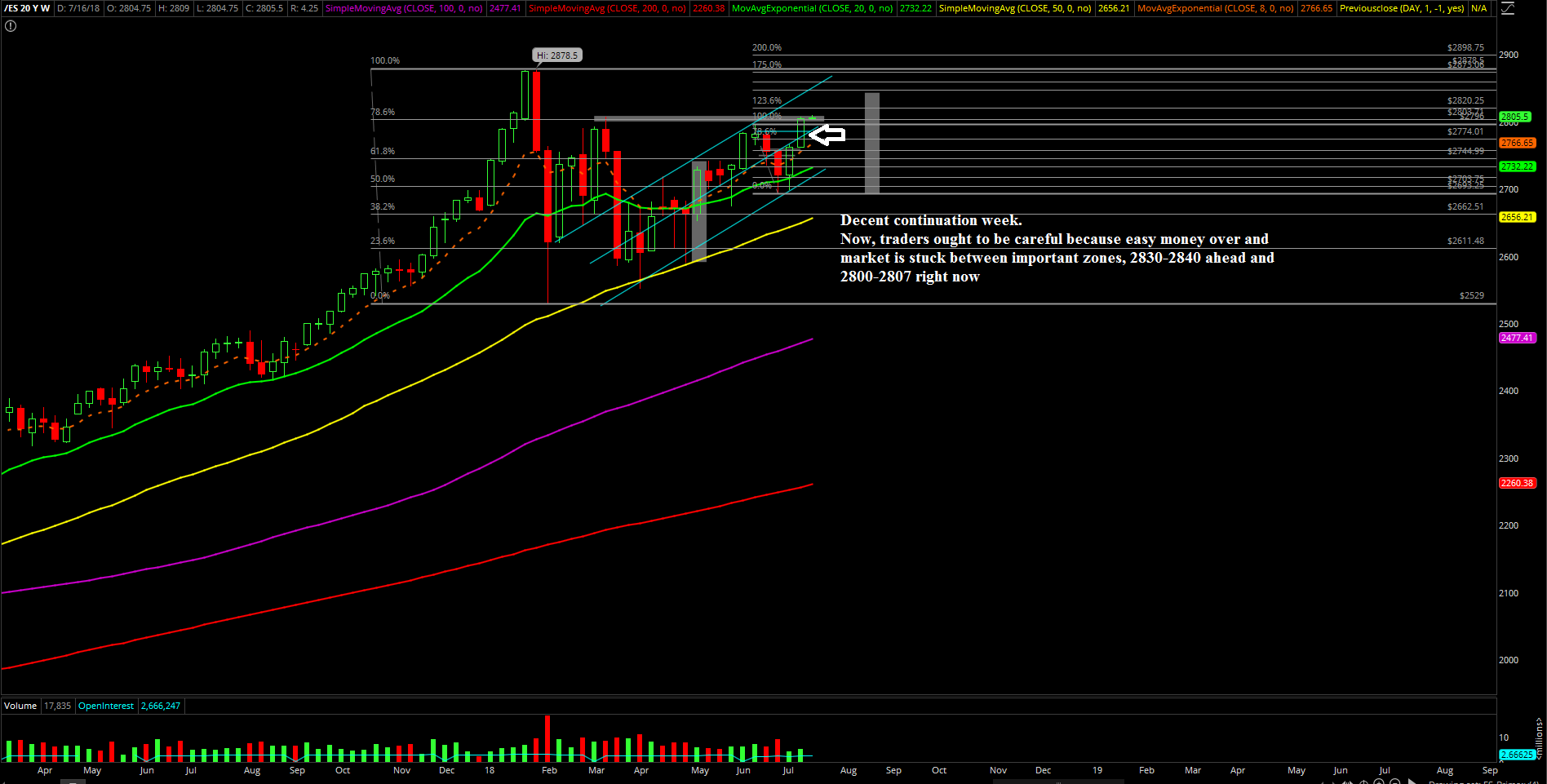 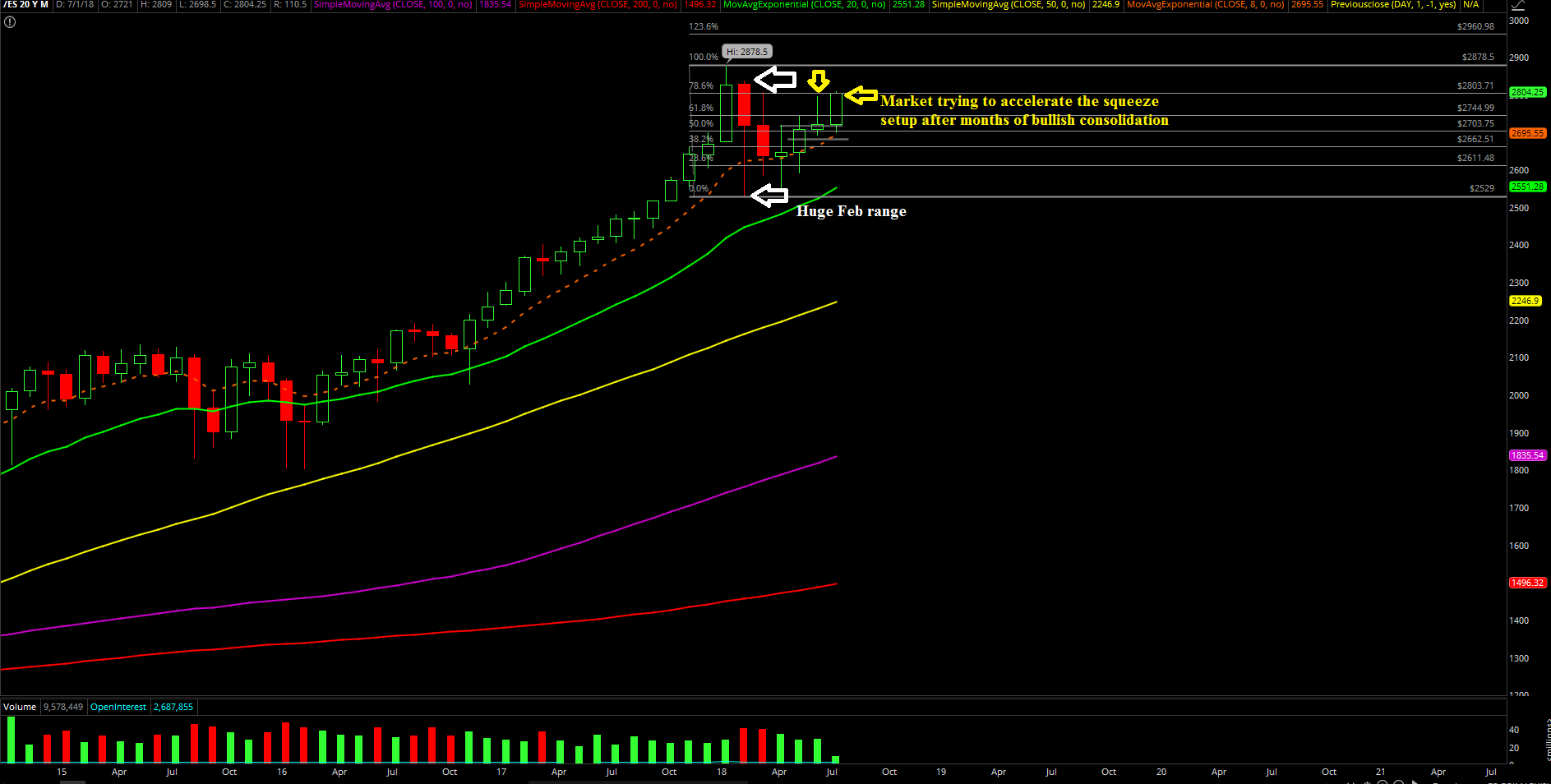 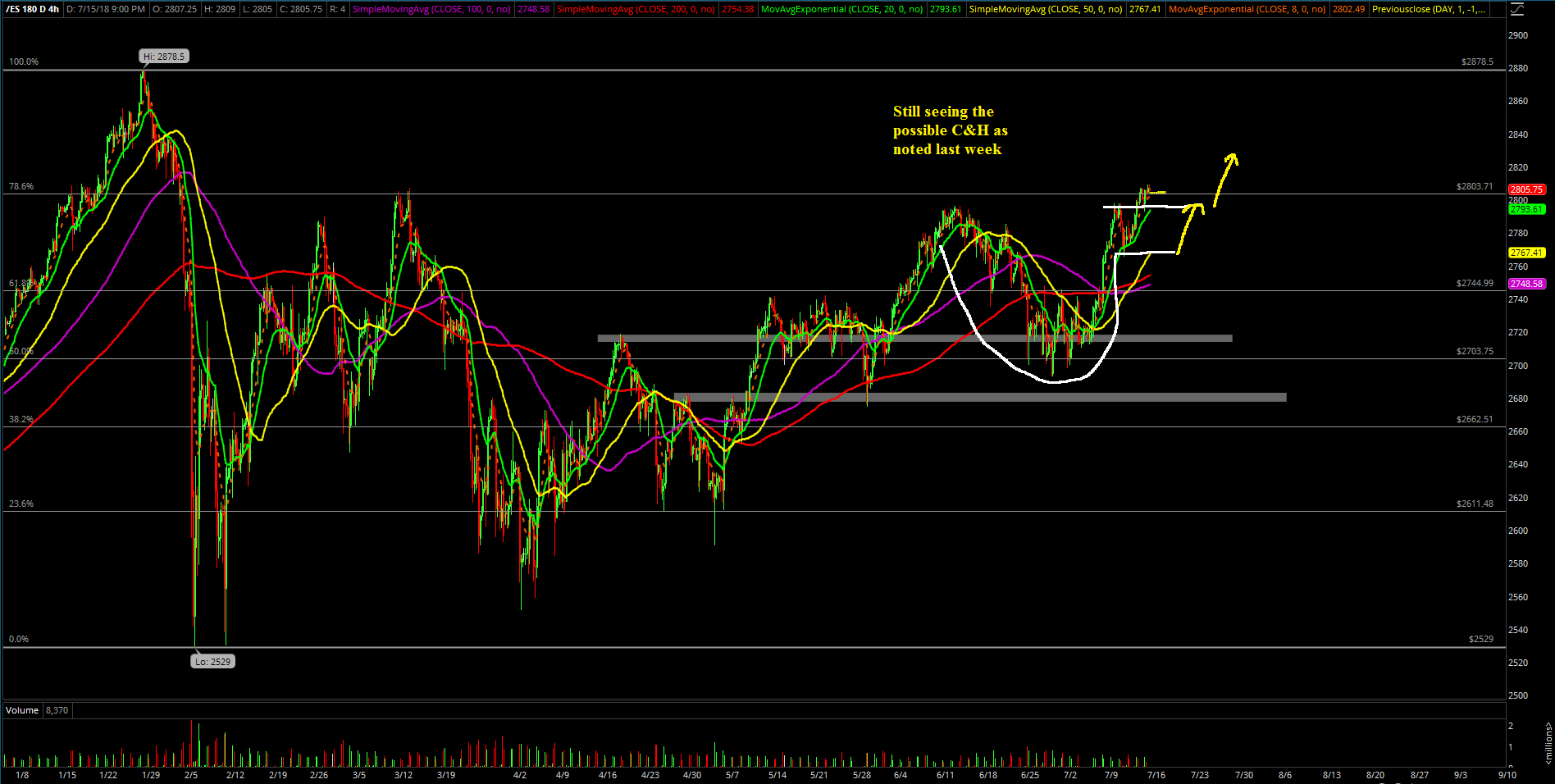 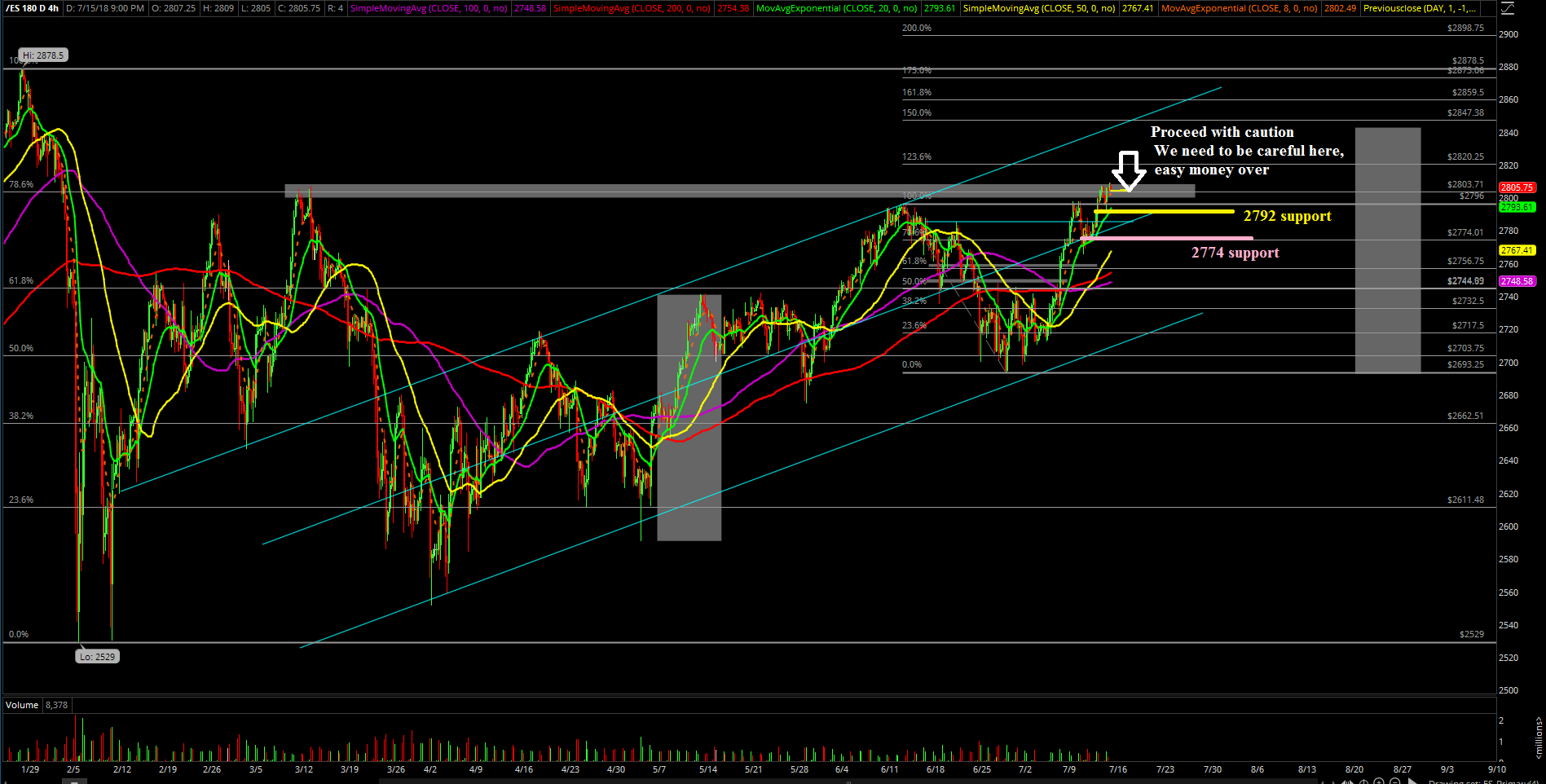 es july15review6_same_pro
See chart reviews and projections on the S&P 500.
Ricky Wen is an analyst at ElliottWaveTrader.net, where he hosts the ES Trade Alerts premium subscription service.