Open-Minded People Have a Different Visual Perception of Reality

I am fascinated by the way that two intelligent people, equipped with the same data, can reach polar opposite conclusions.

The big five personality traits seem to explain part of this puzzle.

“The ‘gate’ that lets through the information that reaches consciousness may have a different level of flexibility,” she says. “Open people appear to have a more flexible gate and let through more information than the average person.”

Those who score high in openness are less likely to experience “inattentional blindness.”

The link it the top of the page will not only explain this more fully, but just the fact that you even clicked on this new study has told HAL everything about YOU!

Every click on your computer is a key to your personality and is being fed into the big brain.

My darling wife is constantly taking Facebook "tests" to find out what kind of a flower, animal or Disney character that she would be.

I try to explain to her what that is really about, (constructing her profile) but of course, she is not OPEN to my input and says that my NEUROTIC is showing! LOL.

The Times reported that in 2014 contractors and employees of Cambridge Analytica, eager to sell psychological profiles of American voters to political campaigns, acquired the private Facebook data of tens of millions of users — the largest known leak in Facebook history.

Just imagine what the CIA and FBI know about each of us. I guess now my Big Five N Neuroticism  is showing! 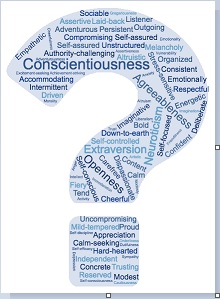