Risk Windows for the Week of May 2nd & Humpty Dumpty

According to my risk summation system, the days this coming week or so with the highest risk of a turn in or acceleration of the current trend in the DJIA are Monday May 2nd, Wednesday May 4th and Friday - Monday May 6th - 9th.  Given the current down trend and the risk window, the DJIA should bottom this coming Monday or sharply accelerate downward.

Last week the Monday the 25th risk window caught the end of the severe downtrend and beginning of a consolidation that lasted most of the week. 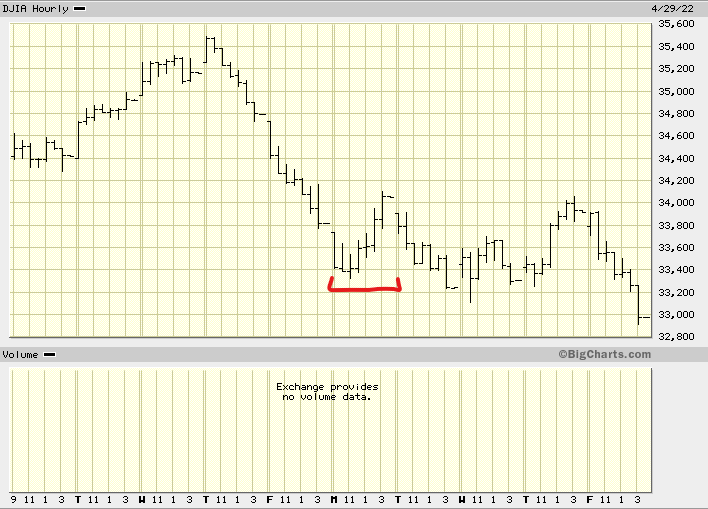 The crash risk window that I now regret mentioning will close this coming Monday.  So far no black swan of sufficient plumage has emerged to take advantage of the oversold condition, but this is definitely a Humpty Dumpty thin shelled market sitting quite precariously on a wall being lanced by numerous onerous events.  It's just that, so far, none of those attempts to dislodge the eggy beast from his perch has been successful.  As a result the DJIA has still not broken the low of March 8th that I noted as a harbinger of a bear market, so that and HD's fate are still very much up in the air.

Interest rates as several others here have mentioned are at a critical juncture as can be seen by TLT hugging the purple parallel lower trend line in the plot below.  The FED should resolve this one way or the other this coming Wednesday.  Before last week's -1.4% GDP number, I was pretty sure which way it would go.  Now I'm not so sure given all the poultry clucking inside the Eccles Building hen house.  Unless I see something north of a 0.5% rise next week, I'll be sticking with my prediction of the Invisible Hand Reverse Robinhood FED strategy to "cure" inflation and no draconian, Volker-like interest rate surge.

Speaking of the pumpers deluxe, they at least appear to be letting the motors driving their impellers cool a bit as can be seen by the flattening of their balance sheet below, but the stock market has more or less behaved.  It will be interesting to see if they can stay the flat or even downward course if a serious break in the DJIA occurs. 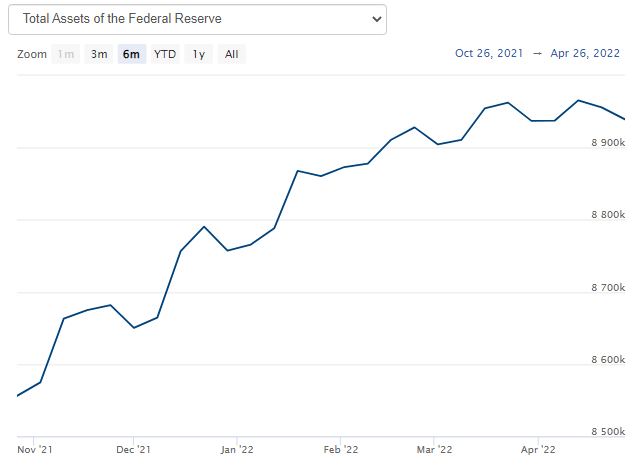 If this is the beginning of a bear market, how low could the DJIA go?

This target probably won't work out given my doggone cracked crystal ball's mongrel pedigree and the market loving FED, but at least it's got a lot of arrows pointing in that direction if things do take a turn for the worse.