According to my risk summation system, the days this coming week with the highest risk of a turn in or acceleration of the current trend in the DJIA are Monday  - Tuesday, May 9 - 10 and Friday May 13th.  As I noted last week, the Friday May 6th and Monday May 9th appear to be a single window.  The high risk sum number for Tuesday May 10th has just made this window even larger.  Not sure what it means.  The summation system did not identify Wednesday May 11th as high risk, but the inflation numbers to be released that morning may have the potential to really move the market.  More on that below.

Last week the risk summation system did me proud hitting the big turns for the week as shown below.  As noted above the Friday window may have been a turn or the turn/acceleration might drag out into Monday or Tuesday of next week since this is one wide risk window. 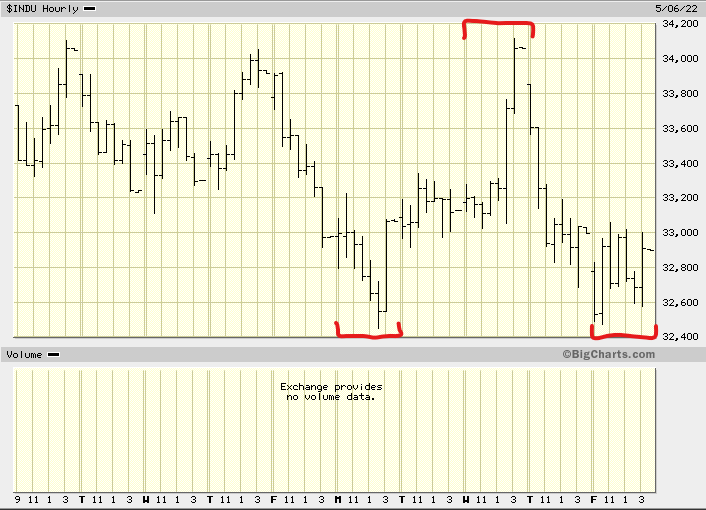 The TLT 20 year bond channel line (purple) that I showed during the week was broken to the downside by the end of the week showing even more weakness in the debt market.  Hard to know which previous pivot to pick to draw a trend line from that might hold.  I guess the green one is the next hope of the bond bulls.

The JNK weekly channel that I showed was also broken but just by a whisker, not the body of a candle, so I suppose it might hold on, but it sure seems unlikely.

As I noted at the top, this coming Wednesday the BLS reports consumer inflation data, or I should say their interpretation of what those figures should be, fudged, finagled and fiddled to the point of being hardly believable.  This week's report puts them in the spotlight as almost never before, and so they will have to really finesse the numbers.  Too low and the FED loses credibility for tightening, too high and that half a percent FED Fund increase will look too measly.  This report will truly require they apply their fine art of fudging to achieve the not too hot and not to cold results needed.  As Orwell said, truth is treason in the empire of lies.

pdx5, the consensus according to tradingeconomics.com is 8.2%, so you are right in line with what's expected.  Since I look at everything that the BLS cranks out with a  jaundiced eye, I too expect a positive surprise, maybe a little sweeter than your number, but not too positive, just enough to crush a few bond and stock bears.  Since my stock trading system is standing on the table and screaming for me to buy, I assume any "good" news will lead to a rally.

My pessimism was reinforced by J. Powell's no .75% hike comment since it was an obvious unforced error on his part.  Why would he ever take anything off the table?  It's like going to gun fight with a knife.  He left himself underequipped to deal with what he might encounter, unless, of course, he knew the fix was in on the inflation numbers coming out this week.  That's the only reason that I could come with that he would do something so obviously inept.