Risk Windows for the Week of June 13th & Shock and Awe

According to my risk summation system, the days in the next week or so with the highest risk of turn in or acceleration of the current trend in the DJIA are Tuesday June 14th, Friday June 17th and Tuesday June 21st.

Last week's Wednesday the 8th risk window did catch the start of the turn down from the high at close the previous day which is just what it says right on the risk window bottle of market medicine label. 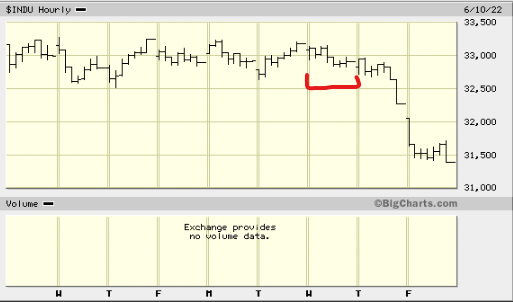 The Brent June 8th turn predicted by the intersecting trend line plot that I posted a week or so ago appears to have occurred, but will need action early this coming week to confirm.  Energy stocks are the current flavour of the month, so some cooling of the fervour is probable given all the attention they have been getting in the press.

Wednesday the 15th Jerome gets to take another bite out of the economic apple.   Given the inflation figures this past week, I think he needs to channel General Schwarzkopf who was famous for his "shock and awe" military attack strategy deploying an overwhelming, massive first wave.  Jerome is still early enough in his inflation fight to deploy a similar strategy with a 0.75% or even a very bold 1% rise Wednesday to signal that he is ready to kick inflation butt and take no prisoners.  To date he's shown no tendency to be bold, so this is not likely, but given that Joe Biden is clearly trying to throw Jerome under the bus at least partially blaming him for the inflation.  Jerome might just remember his Republican roots and return the favour by body slamming the economy into recession right before the midterms.  All's fair in love, war and dirty politics.

"Money cannot consistently be made trading every day or every week during the year." ~ Jesse Livermore Trading Rule
Back to Fearless Forecasters