Risk Windows for Week of July 18th & Out of Gas

According to my risk summation system, the days this week with the highest risk of a turn in or acceleration of the current trend in the DJIA is a Monday-Tuesday July 18-19 window.  There is a smaller peak on Thursday the 21st worth noting, but not quite up to the risk window sum level.

The biggest event during that two day risk window this coming week might be the speech by Fed minion Brainard on Tuesday.   Since the horrible inflation numbers last Wednesday, the market has been hanging onto any word as to whether 1% is or is not on the table at the end of July meeting.  Brainard could add the latest update on their thinking (or rather their lack there of).

Last week, well, the risk window on the 13th, which I thought had such great potential given the abysmal inflation number, was in the middle of a move down, not at a turn which occurred one hour later first thing Thursday morning, and you really couldn't call it an acceleration day either, so just a disappointment.  The real question is was the turn first thing the next morning, Thursday the 14th, the real deal.  This coming Monday/Tuesday risk window should tell that tale. 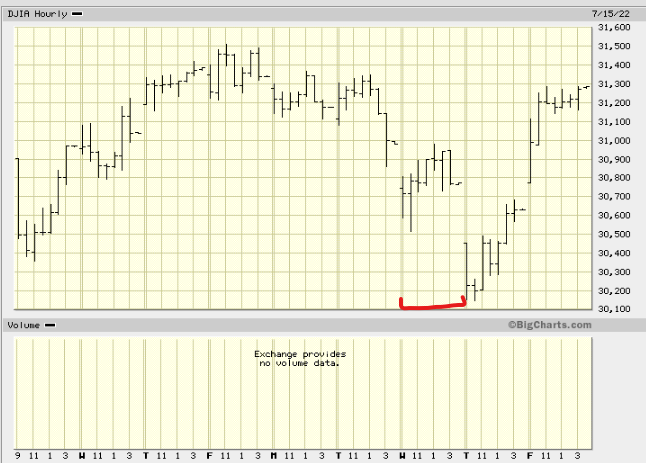 And my poor EWave count that a corrective "4th" wave up inside a larger "A" wave down is forming is just hanging on by its fingernails only saved if there's a new high this coming week above the 28 June high.

Germans have started gathering fire wood for cooking in case Vlad doesn't turn the NS1 gas valve back on this coming Thursday the 22nd.  Much of Europe will quickly be running low on natural gas unless drastic conservation steps such as shutting down high usage industry like steel making.  My risk summation system did not pick this day so I'm assuming Vlad will play nice and turn it back on, but it could turn out to be the highest risk day of the week if not and Europe runs out of gas.

At least we don't need that gas for heating in central UK where it's absolutely boiling with a forecast high of 102F tomorrow in London, and London is not air conditioned.  It's much better here on the south coast in Lyme Regis where the high is only projected to be 79 in the shade.  We're saved by cool sea breezes.  The only thing hotter here in the UK is the campaign to replace Boris as Prime Minister which is now starting to turn a bit heated to say the least.

Just noticed my typo, the gas valve decision is on Friday the 22nd, not Thursday, not unless the Russians finish their "maintenance" work early.