According to my risk summation system, the days this coming week with the highest risk of a turn in or acceleration of the current trend in the DJIA are Monday July 25th and Wednesday July 27th.

Last week the Monday/Tuesday 18th/19th risk window caught the low for the week and the big 750 DJIA point rally. 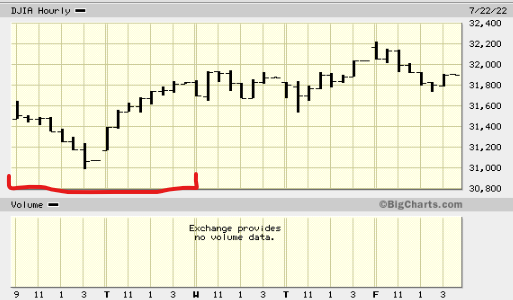 Last week the bulls were batting 1000 with the 1% Fed fund bump rumor dying, Vlad playing nice and turning back on the gas and letting wheat out for sale, Biden's covid pronounced to be mild, gasoline and other commodity prices falling, interest rates falling across the board and not surprisingly technicians proclaiming that the bear is dead (or at minimum taking a summer hibernation to hide from the heat).

The 38% retracement of the move since the covid low back down to the level of the pre-covid highs on June 17th may just be the bare minimum downside for this "A" leg of the bear market given the extremes in bearish sentiment seen over the last month.  My primary EWave count still has the DJIA filling the November 2020 gap to complete a five part "A" wave down which has one more down move, but I must admit if Jerome lilts dovish this coming Wednesday, there really will be happiness in the Hamptons this summer, and my primary count will yet again be toast.

In the past week's risk window post, I derided the Fed head statement that longer dated Treasury yields were "positive" as utter fantasy.  Based on further comments by his Fed minions, I believe I understand what the Fed head sees as the basis for this seemingly delusional statement given the 3.5% treasuries and 9.1% inflation rate.

I now believe that the Fed head meant positive relative to a "core" inflation rate not caused by "transitory" effects of the war and supply chain disruptions due to the pandemic which he believes is only about 3 to 3.5%.  This is why J. Powell said rates were positive.  While J. Powell did not say this explicitly, since the mere mention of the word "transitory" would subject him to further derision,  I now believe this is Powell's unstated belief that is driving his actions.

The Fed apparently is convinced that when Vlad makes nice and ends the war, suppliers react to higher prices by repairing broken supply chains and increasing the supply of goods, and workers react to higher cost of living by working more at their low paying crappy jobs increasing productivity, the "transitory" additional inflation above and beyond the "core" inflation will magically dissipate leaving behind the inflation planet's inner iron core rate of about 3 - 3.5% which Powell believes can be handily dealt with using the modest 3.5% or maybe a bit higher planned Fed funds rate.  This magic math is apparently the Fed policy.

I will be watching the presser this Wednesday to see if Powell confirms my suspicion above.  If he does, shorter term it should be wildly bullish for the stock market.  It is completely delusional on several fronts, but very bullish, new high bullish in fairly short order, for the stock market, but bearish longer term when the undead  inflation vampire rises from its shallow grave even more virulent and bites again.

The above is driving my DJIA Elliott Wave count forecast that a large downward "A" wave is completing to be followed by an upward large "B" wave maybe to new highs which will in turn be followed by the unearthed inflation vampire induced large "C" wave down which will end as the Fed rates are finally raised high enough to put a stake in the pointed toothed inflation beast's heart.  The timing of this A-B-C is dependent on the complex interactions of the war, supply chains, labor actions, oil market, the midterm election, the Fed, etc., but I assume it will be over by the end of 2023, but that's just a SWAG, as is all the above of course.

The action in the DJIA thus far today is not consistent with the risk window label shown in my post above.  Either I'm wrong and it's not a risk window (most likely option) or the DJIA should move sharply up or down before the close.  The narrowing Bollinger band also shows increased risk of a big jump in volatility. 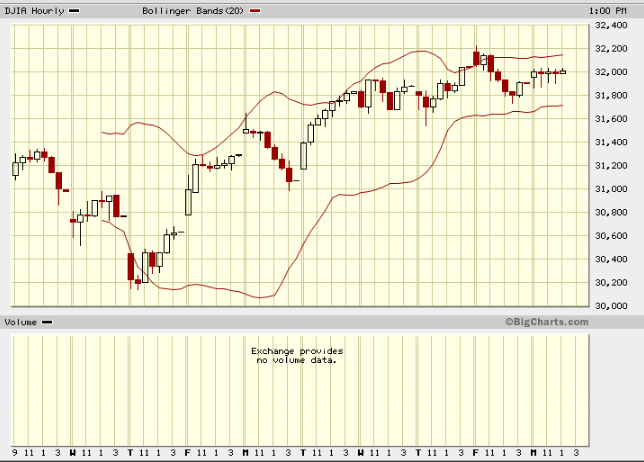 Anyway, just noticed above and thought I would do an update.