Risk Windows & A Rose by Any Other Name

According to my risk summation system, next week is going to be a mess.  The system has a peak on Monday and one from sometime roughly mid-day Tuesday to about mid-day Wednesday and one stretching from next Friday the 5th through the following Monday the 8th, a mess. 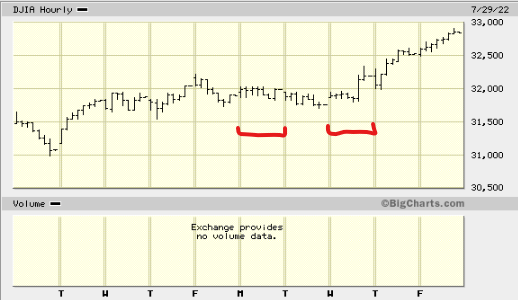 Notice anything funny about the slope of the money out (red line) versus the money in (green line) on the Fed balance sheet plot below from the St Louis Fed?  If the Fed's hands are supposed to be wrapped around the throat of the economy, they sure aren't trying to choke it, maybe give it a loving hug, but definitely not throttling to any where near the degree that they were pumping it only a few months ago.

Last week's stock market rally has got to have the Fed worried.  How are you going get away with gradually starving the unwashed hoi polloi if the hoity toity are raking it in.  Making  womanizing billionaires into trillionaires while gradually ratcheting down the standard of living of the masses just has "bad idea" written all over it.

Two negative GDP quarters in a row should be called a recession, mild though it may be, but a rose is still a rose no matter what name you give it.  The plot above shows precisely why this is a recession in name only, liquidity out the wazoo created since the pandemic low on the left of the chart.  Financial institutions are literally rolling in the green stuff.  As of last Wednesday the Fed charges member banks 2.5%/yr to borrow money overnight to tidy up their balance sheet.  This is a charade, banks are not paying this.  If they were, they would offer me more than 0.1% for my money.  The banks must still be flush and don't need either my or the Fed's largesse.   Until this changes, inflation will keep simmering, maybe not boiling, but bubbling away eating into the purchasing power of the masses.

All correct thoughts in your post. Yeah, the PTB's just stole 9.1% of my money without using a gun.

I guess I will have to make at least 15% profit in stock trading to break even after paying cap gain tax.

Early this coming week I'll be watching the 5 day moving average of the number of NYSE new highs - new lows for a clue as to whether a correction to this recent blistering uptrend is at hand.  As the little green arrows in the plot below show, it has been pretty good at tagging local tops recently.  If the divergence I show at the end of last week holds, I assume some sort of correction should unfold.

As I alluded to above, I suspect the Fed minions will be out on the stump next week trying to pour cold water on this rally.  Maybe they'll try to resurrect the 1% Fed funds bump at the next meeting rumor, who knows, but tough talk is a certain.  Evans talks Tuesday and Mester on Thursday, but I suspect others will chime in if the DJIA continues its rally, particularly if it accelerates.  If I'm wrong, and the Fed talkers this week brag that they've got inflation whipped and are dovish, this rally should catch on fire.

All correct thoughts in your post. Yeah, the PTB's just stole 9.1% of my money without using a gun.

I guess I will have to make at least 15% profit in stock trading to break even after paying cap gain tax.