61 replies to this topic

Took profits on TLT CALLS, now holding only 24.   UVXY not moving enough convince me to add as I wanted, holding 18.

However, there is the PELOSI/TAIWAN issue, the UKRAINE/RUSSIA/GAS/EU issue etc etc, and many more geopolitical issues than can influence big moves on the markets.

I also bought some TSLA puts - the highly inflated TSLA stock is likely to go down 10% and its factory in Shanghai may get problems in the case a war erupts there as rumor going around that Chinese military is planning for ..................... 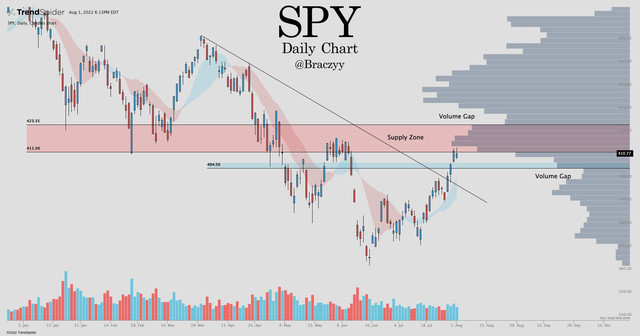 Backed off slightly but still in the reversal zone; it can remain there for a while; overbought & oversold levels are in the eyes of the beholder and can cause huge losses for those who believe it is a great indicator to trigger a trade!

No war, PELOSI arriving in TAIWAN in about an hour, 10am EST

AIR FORCE JET took a different route, east of the Phillipines, approaching TAWIAN from the east and not from the TAIWAN STRAIT S

With reduced risk from PELOSI's visit, markets will bottom today and then rise into next week,   ES 4250 to 4300

but can overshoot higher or fail to reach this target

FA rules, politics more important in this era than TA

I had flipped bullish because of that pretty big volume on the lows of the futures. ES even had more volume at that low than at open.

Next time back under 900, perhaps the rollover begins