Risk Windows for Labor Day Week and That Sinking Feeling

According to my risk summation system, the days next week with the highest risk of a turn in or acceleration of the current trend in the DJIA are Tuesday September 6th and Wednesday the 7th.

This past week the Friday the 2nd risk window tagged the low for the week and maybe a double bottom of some degree if the DJIA heads north on Tuesday September 6th. 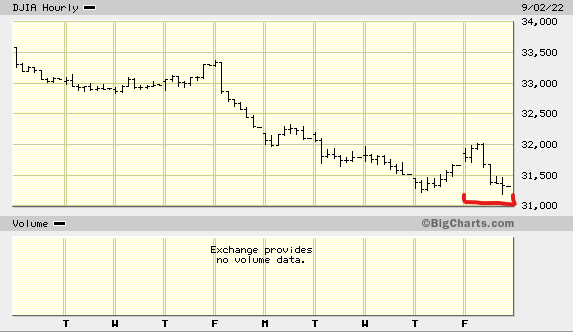 J. Powell speaks this coming Thursday the 8th, so that might be a risk window too, for the bears that is, if he tempers his Jackson Hole 10 minute tighten talk at all.  If he doubles down on the tough talk, maybe a bad day for the bulls, you just never know which side of the bed he's going to get out on.  I suspect that the stock market might just try to sway him during the 6th & 7th risk window leading up to his talk.

This coming Monday the UK gets a new Conservative party leader and Prime Minister which will be Liz Truss according to the pundits and pollsters.  She's supposed to be a Boris retread, but with a plunging Pound and economy and soaring energy prices and restive labor, she may be forced to take a different tack.  Taking on this job at this moment in time is a bit like volunteering to be the Titanic captain on her maiden voyage, and I suspect she's going to have that very same sinking feeling not too long after the excitement of winning dies down sometime early Tuesday morning when she suddenly realizes that the bright shinny thing on the horizon is not the dawn of a new day, but instead a big chunk of white ice with her name written on it.

Liz Truss was a good choice by the Tories. But the iceberg ahead may be too big for her to tackle.

Do not under-estimate the pain inflation is causing 2/3 rds of americans. They are using plastic cards for money like crazy.

Elections are only 8 seeks away and politicians are nervous. Powell should have been under pressure to raise rates last year.

Now he can not squirm his way out of it. As usual FED is behind the curve. So long as core inflation is way higher than 2% FED target,

rates will be increased. Powell may make bulls feel some warmth on the 8th, but that fuzzy warm feeling will wear off quickly.

This is not a good month to watch the sky.

pdx5, that's precisely why I noted the Thursday the 8th Fed Head speech, the Fed's tendency to kowtow to the bulls whenever there has been a stock market swoon.  The Fed may still think that they can moderate the effect on the "economy" caused by the rate hikes by continuing to kite the stock market all the while tightened the screws on the working hoi polloi to drive down the measured inflation.  Trickle down economics is still apparently very popular there.  They haven't been concerned in the past with the ever widening wealth gap, so it wouldn't be a big surprise if they didn't get too concerned now.

They only got worried about Inflation when it was measured inflation, not when it was inflation enriching the well healed in the form of sky rocketing stock prices, ever rising high end real estate, etc. which isn't measured in the CPI which they want to have low, steady inflation which only gradually impoverishing the hoi polloi.  The Fed is fully aware that they have to boil the frogs slowly.  If they turn up the heat too much, they cause worker strikes, wage demands, etc. to rise, all of which are an anathema.  There's actually been raging unmeasured inflation for years that was just ignored by the Fed.  It was only when some of the money they've been pumping out for years actually did exceed a mere trickle down to the masses in the form of all the Covid stimies which drove measured CPI that the Fed got concerned.

The Jackson Hole speech was devoid of any olive branches for the investment community.  It will be really hard for this Fed to continue to be so miserly to the well healed if this little stock sell off picks up steam in the coming days and weeks.  Bears will need to watch each speech going forward with their little quivering, fearful finger hovering at the ready over the buy button.  The put/call ratios and sentiment surveys which I watch like AAII, TSP and NAAIM are all sitting at bearish extremes which could easily power a rally if the Fed head only drops a kind word or two in his speech this Thursday.

The risk windows data above that I have been publishing for many weeks is just one part of my trading system.  The four basic parts are shown below.  The system is built around the DJIA index and is used to trade the DIA and DOG ETF's in a tax deferred account:

1) A buy/sell signal based on the sum of dozens of weekly and daily sentiment, divergence, etc. indicators that I track governed by a short term trend line whose break or the chandelier below triggers the trade indicated by the signal line.  Figuring out where this trend line should be placed is more art than science and is probably the toughest part of this system.  The trend line is needed to reduce whipsaws since the signal line tends to be early. 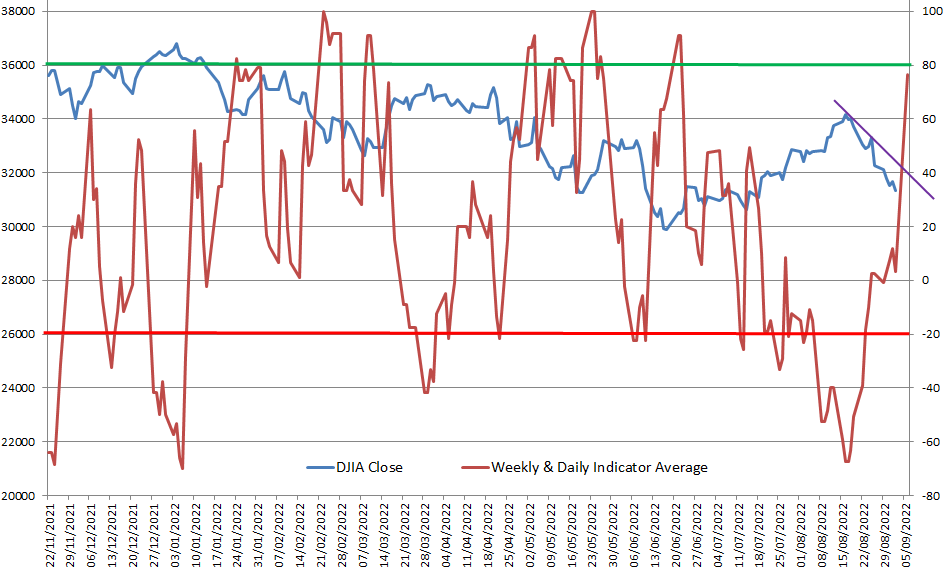 2) A chandelier stop to limit my risk and keep me on the right side of the trend. 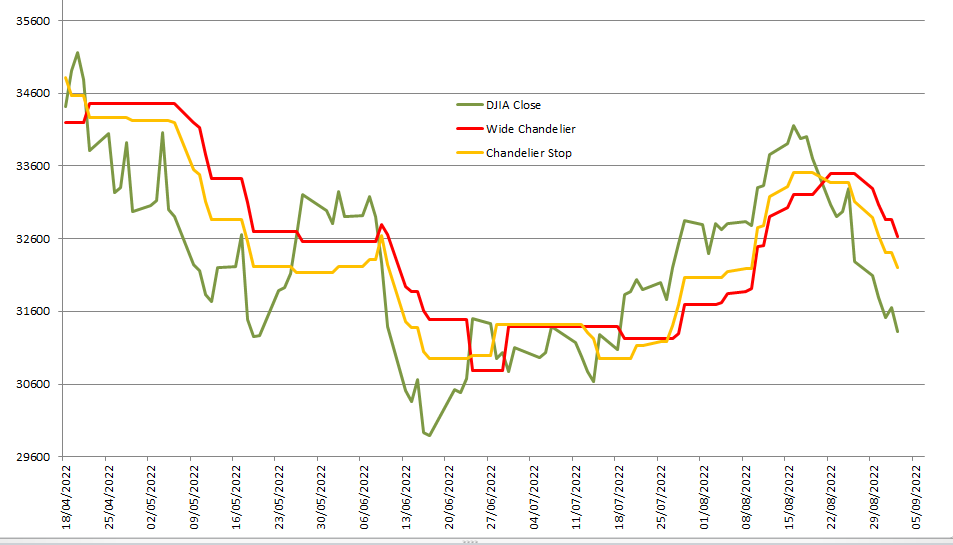 3) The risk windows to identify time frames when turns in the DJIA are more likely.  I will delay or advance the timing of a trade if a trend line crossing has or appears to be about to happen in the vicinity of a risk window. 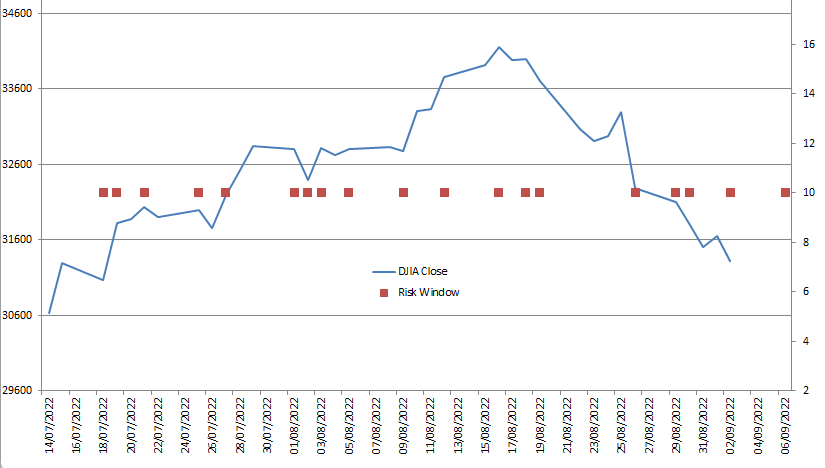 4) And finally a crude Elliott Wave count to try to fit the current action into a bigger market picture which I currently see as a long term bear market comprised of a large 5 part A leg down which should finish this fall, a big three part B leg up maybe to new highs which is then followed by a nasty large C leg down in which the Fed finally comes to grips with the inflation.  The count I use is developed based on my own work and the counts of four E-Wave Gurus that I track on the internet.  The optimist in me hopes this bear will croak by the end of 2023, but my pessimistic side thinks it might take a new president and a new Fed Head to fix this big mess dragging it out into 2025.

Currently my trading account is in cash due to the tug of war involving the surging buy indicator which hasn't quite reached a signal level, the high risk window value early this week, an Elliott Wave count which is looking for a short term reversal up inside an intermediate term down trend and my concerns that the Fed will harden/soften its tone this week as mentioned above.   The fact that I'm basically a big chicken also doesn't help.  In normal times the action Tuesday would force me off the fence, but I may just wait until I hear what Jerome has to say on Thursday, since, well, you know, cluck, cluck.

With Apple new phone release on Wednesday, along with a possible bump from the market share news just released for Apple, I could see that chart as a possibility.

But once 156 area is clearly violated, whether it be a whackin' on Tuesday, or after a bump into mid-week, Look Out Below on Apple for some time to come....and by extension, the other Mega Caps and Stock Indexes