My risk summation system is yet again muddled with risk turns scattered across the week.  There is a slight concentration on Monday the 12th possibly stretching into the morning of Tuesday the 13th and another hump on Thursday the 15th.  I guess those will have to suffice for risk windows this week.

Last week the Tuesday-Wednesday risk window tagged what appears to be an important low (red cup).  I have also highlighted in yellow the Friday risk window from the previous week which I incorrectly noted in last week's post as a possible double low.  It was the high that day that was important not the low it would now seem with 20-20 hindsight. 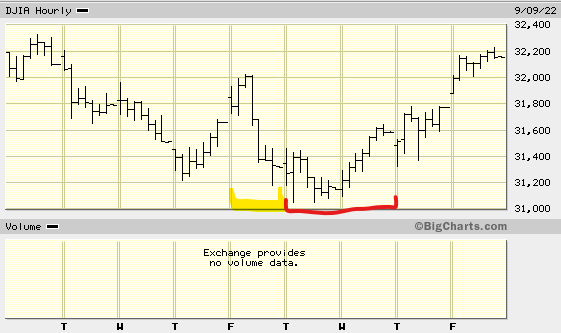 The new UK Prime Minister, Liz Truss, has copied Joe Biden and announced a big money giveaway, not student loans like Joe, but paying part of folks' energy bills.  As I noted before these giveaways are fighting what the US & British central banks are trying to do making their life harder and probably extending the time required to corral inflation by basically destroying demand destruction.

I suspect the inflation figures to be released this coming Tuesday and Wednesday will be much better, particularly the PPI on Wednesday given the war premium on wheat and gasoline has been largely wiped out.  If any Fed minion in front of cameras this coming week so much as hints that this improvement will give pause to the cause, the stock market will probably explode to the upside making an absolute mockery of what I have to say in the paragraph immediately below.

Something new this week, I thought that I would start publishing the status of the four elements of my trading system and what trades I have put on showing how the risk windows noted above fit in at the end of the week just past.

2) The short chandelier buy stop has been broken, but not the hold your nose and buy slower chandelier 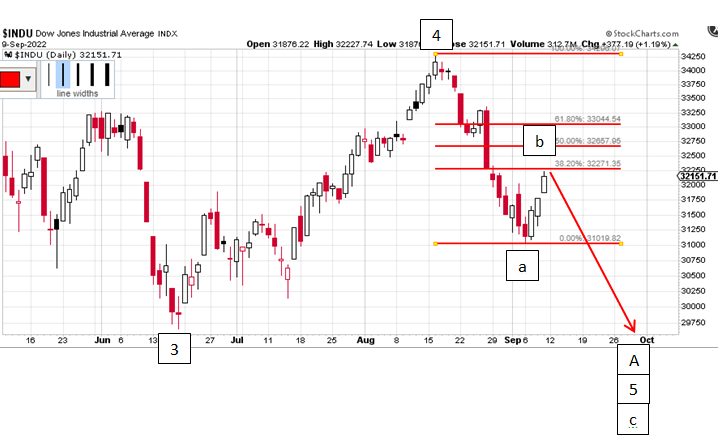 Given the E-wave risk and the sub-buy level of the indicator, I have interpreted the system as saying stay in cash.

I did make one trade this past week purchasing the British pound on Wednesday at 1.1419 at the level shown by the red line below based on my British Pound trading system which is completely separate from my stock system.  So far so good, but I did try to catch a falling knife, and we all know how these things usually work out, blood is involved.

I meant to mention an upcoming crash risk window in my post above, but it slipped my mind until just now.  This crash risk window begins week after next and stretches from Wednesday September 21st until Monday September 26th.  This is by no means the first time that I've noted these crash risk windows, and yes, not one of them ever amounted to diddly-squat.   As I've said many times before, I try to make up for not being able to predict correctly by predicting frequently.  The probability of any one of these crash windows hitting is something on the order of 1 in 30 or worse, so about the same as picking the number on a spin of the roulette wheel.

If this one doesn't work out, there are two more of these crash risk windows over the next couple of months, so I will have a few more shots at redeeming my prestidigitation credentials yet this year.

The ink was barely dry on my post, when the DJIA futures last night pointed to a NY open higher than the 0.382 retracement limit that I noted above.  I guess this should not be all that surprising given that the internet was lit up this weekend with chatter about how the inflation figures to be released this week would show sharply slowing inflation.  I alluded to this possibility above and the risk that the Fed minions would hint at pausing.  Apparently, the FOMO traders aren't waiting around to see if this happens.

This 0.382 retracement break sharply reduces the likelihood that my count above is correct, although low probability is not zero probability.  The 50% and 61.8% retracements shown on the plot may step up to the plate and do the job of stopping the advance.  The real tip off should be in the structure of this move up.  If it appears to be in three waves, there's still some hope for my count, but if five waves are obvious, then I'll have to throw in the towel.

While I still think the more bearish count above is correct, of course, I always have an alternate more bullish count in my pocket just in case.  That's E-Wave for you, and why I never do hand counts in ink.  The more bullish alternate count has the large "A" wave complete at the June low and a large upward "B" wave now underway.  As I have said before, E-Wave is more descriptive than predictive, so this reset is just part of the game.

More problematic is my hold-your-nose-and-buy chandelier stop may be crossed if this rally puts on very much more steam, and that will force a very difficult decision.  Oh well, if it was easy, I would be rich living the dolce vita and wouldn't get to experience the "joy" of being stuck in front of a screen worrying about such trivial things.