1930s photos show Greenland glaciers retreating faster than today, but nobody thought it was a big deal. 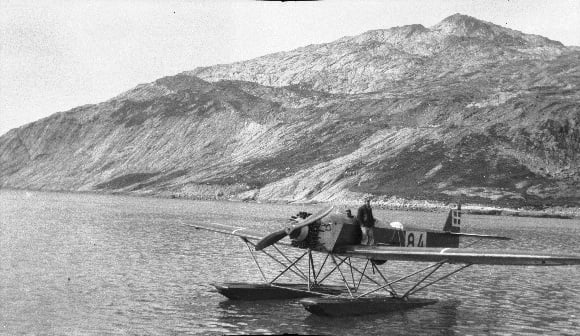 The photos in question were taken by the seventh Thule Expedition to Greenland led by Dr Knud Rasmussen in 1932. The explorers were equipped with a seaplane, which they used to take aerial snaps of glaciers along the Arctic island's coasts.

After the expedition returned the photographs were used to make maps and charts of the area, then placed in archives in Denmark where they lay forgotten for decades. Then, in recent years, international researchers trying to find information on the history of the Greenland glaciers stumbled across them.

Taken together the pictures show clearly that glaciers in the region were melting even faster in the 1930s than they are today, according to Professor Jason Box, who works at the Byrd Polar Research Center at Ohio State U.

It now appears that the glaciers were retreating even faster eighty years ago: but nobody worried about it, and the ice subsequently came back again.

Unfortunately atmospheric sulphur emissions also cause other things such as acid rain, and as a result rich Western nations cracked down on sulphates in the 1960s. Prof Box believes that this led to warming from the 1970s onward, which has now led to the glaciers retreating since around 2000.

Other scientists have said recently that late-20th-century temperature rises in the Arctic may result largely from clean-air legislation intended to deal with acid rain: some have even gone so far as to suggest that rapid coal- and diesel-fuelled industrialisation in China is serving to prevent further warming right now.

Shhh! Don't disturb the worshipers with this:

Antarctic Sea Ice Sets Another Record -- for Most Amount of Ice Ever Recorded This Time of Year!
Antarctic sea ice set another record this past week, with the most amount of ice ever recorded on day 256 of the calendar year (September 12 of this leap year). Please, nobody tell the mainstream media or they might have to retract some stories and admit they are misrepresenting scientific data.

National Public Radio (NPR) published an article on its website last month claiming, “Ten years ago, a piece of ice the size of Rhode Island disintegrated and melted in the waters off Antarctica. Two other massive ice shelves along the Antarctic Peninsula had suffered similar fates a few years before. The events became poster children for the effects of global warming. … There’s no question that unusually warm air triggered the final demise of these huge chunks of ice.”
NPR failed to mention anywhere in its article that Antarctic sea ice has been growing since satellites first began measuring the ice 33 years ago and the sea ice has been above the 33-year average throughout 2012.

Sea ice around one pole is shrinking while sea ice around another pole is growing. This sure sounds like a global warming crisis to me.