We here in the midwest have been seeing record cold temperatures this spring.
Even "record" CO2 levels can not help raise the temperatures.
Is it the Sunpocalypse?

Sunpocalypse: Something is very wrong with the sun
Despite the predictions of an active sun for 2012 and 2013, the sun is quite pacific leaving scientists to wonder over what appears to be the sun's quietest period over the last century.


Solar Cycle Prediction
(Updated 2013/04/01)
(Notice how low the activity currently is, even as we reach towards the predicted top in May 2013.)

Repeat of The Maunder Minimum?
This period of solar inactivity also corresponds to a climatic period called the "Little Ice Age" when rivers that are normally ice-free froze and snow fields remained year-round at lower altitudes. There is evidence that the Sun has had similar periods of inactivity in the more distant past.
The Little Ice Age, 1550 to 1850, was typified by unpredictable weather and colder summers in northern Europe. The region was beset with sporadic famines. Glaciers crept down from mountains and consumer farms and villages, while lakes and ponds froze over across Europe so that people could skate on them.
The current level of solar activity is still well above Maunder Minimum levels, but it could portend the start of a general decline. Such a decline could affect Earth's climate for several centuries.

Too Wet to Plant in the Midwest
"While the situation is not serious, frequent rainfall, chilly conditions and muddy soil over much of the Midwest this spring has put the skids on planting for the time being." 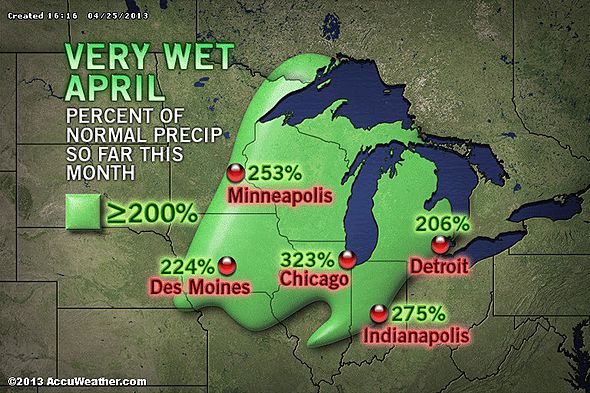 Roger what about chemtrails.
And why is the sun white, it used to be yellow.

Where I live was a great releif for one year, now we are pounded relentlessly.

Our little airport has 6 planes a day and I watch 10 overhead spraying at one time.

There is a disturbing pattern. They spray early evening ( no sun problem ?).
Here is the big one, they do it before precipitation. They want it in the ground, food
and water supply ?

government
c) all the above
d) one-in-same entity

I like these guys, they are being cited in target in exec orders and such, they are
in the lead.

Roger what about chemtrails.
And why is the sun white, it used to be yellow.

Maybe they are spraying the Sun in an effort to fight global warming?

But it's getting really tough to keep the faith as CO2 levels are reported to be "at all time highs" and yet temperatures are not.
Maybe the tiny little sun and it's cycles do have a little tiny impact on this great big huge earth.

“The Rise and Fall of the Global Warming movement”.

Russia’s Pulkovo Observatory: 'We Could Face Cooling Period For 200-250 Years'...
Solar activity follows different cycles, including an 11-year cycle, a 90-year cycle and a 200-year cycle. Yuri Nagovitsyn comments.
“Evidently, solar activity is on the decrease. The 11-year cycle doesn’t bring about considerable climate change – only 1-2%. The impact of the 200-year cycle is greater – up to 50%. In this respect, we could be in for a cooling period that lasts 200-250 years. The period of low solar activity could start in 2030-2040 but it won’t be as pervasive as in the late 17th century”.

Somewhere historians are most certainly already writing the final chapters of a long overdue book,
“The Rise and Fall of the Global Warming movement”.

The news from Pulkovo makes it all the more important to concentrate on the real threat of a cooling world.
Although it is good to know that scientists do not think that the next cooling period will be as pervasive as the one in the late 17th century.

Freakish cold has U.S. asking: 'Where's spring?'...
Another snowstorm taking aim at Denver...
Back to Winter in Midwest...

"Record cold and snow has been reported in dozens of cities, with the worst of the chill in the Rockies, upper Midwest and northern Plains. Several baseball games have been snowed out in both Denver and Minneapolis.
Cities such as Rapid City, S.D.; Duluth, Minn.; and Boulder, Colo., have all endured their snowiest month ever recorded. (In all three locations, weather records go back more than 100 years.) In fact, more than 1,100 snowfall records and 3,400 cold records have been set across the nation so far in April, according to the National Climatic Data Center."

Tulsa saw it's latest ever snowfall last night along with record cold for May 2nd throughout the area.
And spring has been eerily quiet storm wise.
Spring storms need the Sun's heat to produce tornadoes.

USA sees all time record low number of tornadoes...
"Unfortunately that hasn’t stopped the more zealous environmental media from jumping on most every extreme weather event and screaming climate change."

Historic Snowstorm Hits Plains to Upper Midwest
The list of locations that have received record May snowfall from a storm that brought up to 2 feet of over the central Rockies continues to grow over portions of the Plains and Upper Midwest.

How many climate skeptics does it take to change a lightbulb? First off, the light bulb is not burned out, and even if it was, it is not MY fault so why should I change it? Besides, it is far too expensive for me to change a lightbulb. Why are light fascists always trying to get me to change my bulb? Also, we are not taking into account all of the wonderful benefits of living in the dark! Oh, and you don't see the Chinese changing THEIR light bulbs do you? Well do you?

If the world didn't suck, wouldn't we all just fly off?

If it's not hot, it's not climate, it's weather, or so say the "experts".
Well it's cold as hell here on May 4th.
I'm gardening today in an overcoat and stocking hat.

Arkansas sees first May snow since records began in 1819...

Pay no attention to the man behind the curtain. It's just Al, Divinity School Dropout and the Pope of Dopes. 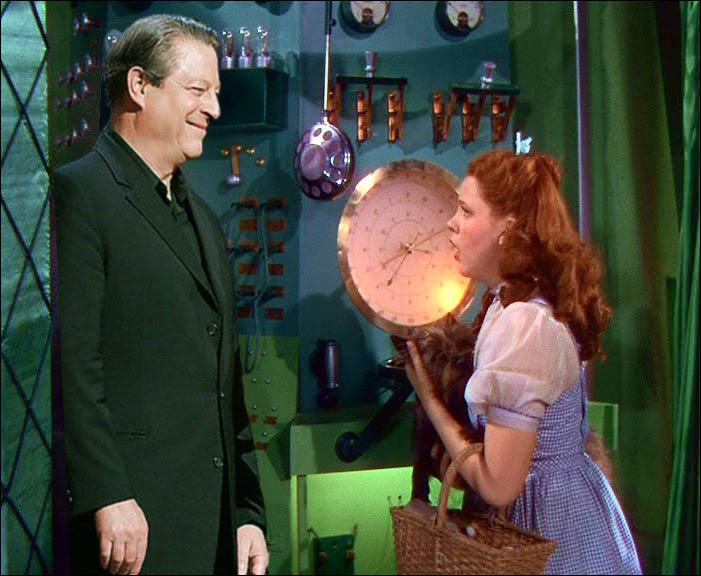 CHICAGO May 3 (Reuters) - U.S. wholesale beef prices rose to an all-time high on Friday as the delayed spring grilling season is heating up and as supermarkets buy meat for the May 27 U.S. Memorial Day holiday weekend, commonly seen as the unofficial start of the summer cookout season, analysts said.
The cold soggy start to spring put outdoor cookouts on hold throughout most of April, but temperatures are seen climbing in the coming weeks, prompting grocers to stock up for a seasonal bump in sales of steaks, burgers and other cookout favorites.
The U.S. Department of Agriculture on Friday reported the wholesale price for choice beef, commonly called the cutout, at $201.68 per 100 lbs (cwt), eclipsing the previous record of $201.18 set on Oct 16, 2003.

Martin Armstrong has mentioned Astrophysicist Dr. Sallie Baliunas , who has done research on a 300 year solar cycle that has influenced the climate on Earth. Armstrong noted that that cycle has seen the rise of fall of just about every major civilization on Earth for thousands of years. He says that the volatility we are seeing now in weather is typical of a cycle that is peaking, whether it be a market cycle or a physical cycle they are all subject to the same logic of energy. His latest view is the the warming will peak in 2032 which is the peak of his pi 8.6, 51.6 and 309 year cycles. Human activity has nothing to do with the warming in his view.

Dr. Sallie Baliunas...
"How does the Sun's possible influence compare to that of increasing greenhouse gases through burning fossil fuels? The 20th century was warmer than the 19th century. The past century's weather has had three major trends: a strong warming which peaked around 1940, a cooling trend until the late 1970s and warming since then. Baliunas noted that casting doubt on the notion of runaway global warming is the fact that we put most greenhouse gases in the air during the past few decades, so warming in the early 20th century couldn't be man-made; it may have been due to solar brightening. Theories say that the lower troposphere (between 5000 and 25,000 feet) should warm with the increase of carbon dioxide, but although there has been warming at the surface, satellite measurements have not shown any such atmospheric trend. One theory holds that clouds may act as thermostats, so that if there is a human effect, it must be slow to develop, which gives us time to put into place effective policies on climate change. (Dr. Tyson asked her, if we are truly facing another ice age, if burning more fossil fuels might be a way to stave it off! She responded by saying that the increase in carbon dioxide levels has not shown any significant effect on the lower troposphere, so pumping yet more carbon dioxide into the atmosphere probably would not change much.) "