There is a bit of a timing confluence around 9/10/13. At the moment, the two highest probability scenarios I see are as follows: 1. Rally from the 8/30 low to retrace 60-70% of the move down from 8/2, ideally peaking 9/10/13 (+/- a day or two). If the market rallies into that window, I would be on alert for a possible panic wave down until late Sep to early Oct (ideally 9/27 or 30ish). OR 2. Market bounces a bit here and sells off into the 9/9 to 9/12 window, followed by a deep retracement up (ideally till about the end of Sep) before the down trend continues. I think it's likely the Aug 2013 high marks the major top I've been looking for, but anything is possible so DYODD. Kimston

I've seen a number of posts by technicians on various boards pointing out that the next resistance on the Dow Industrials is around 16,000 where the upper trendline is. Some of those posts then speculate the market will launch through the trendline after a modest correction.

Well, I would point out that the ETF for the DOW 30 has already hit the upper trendline. 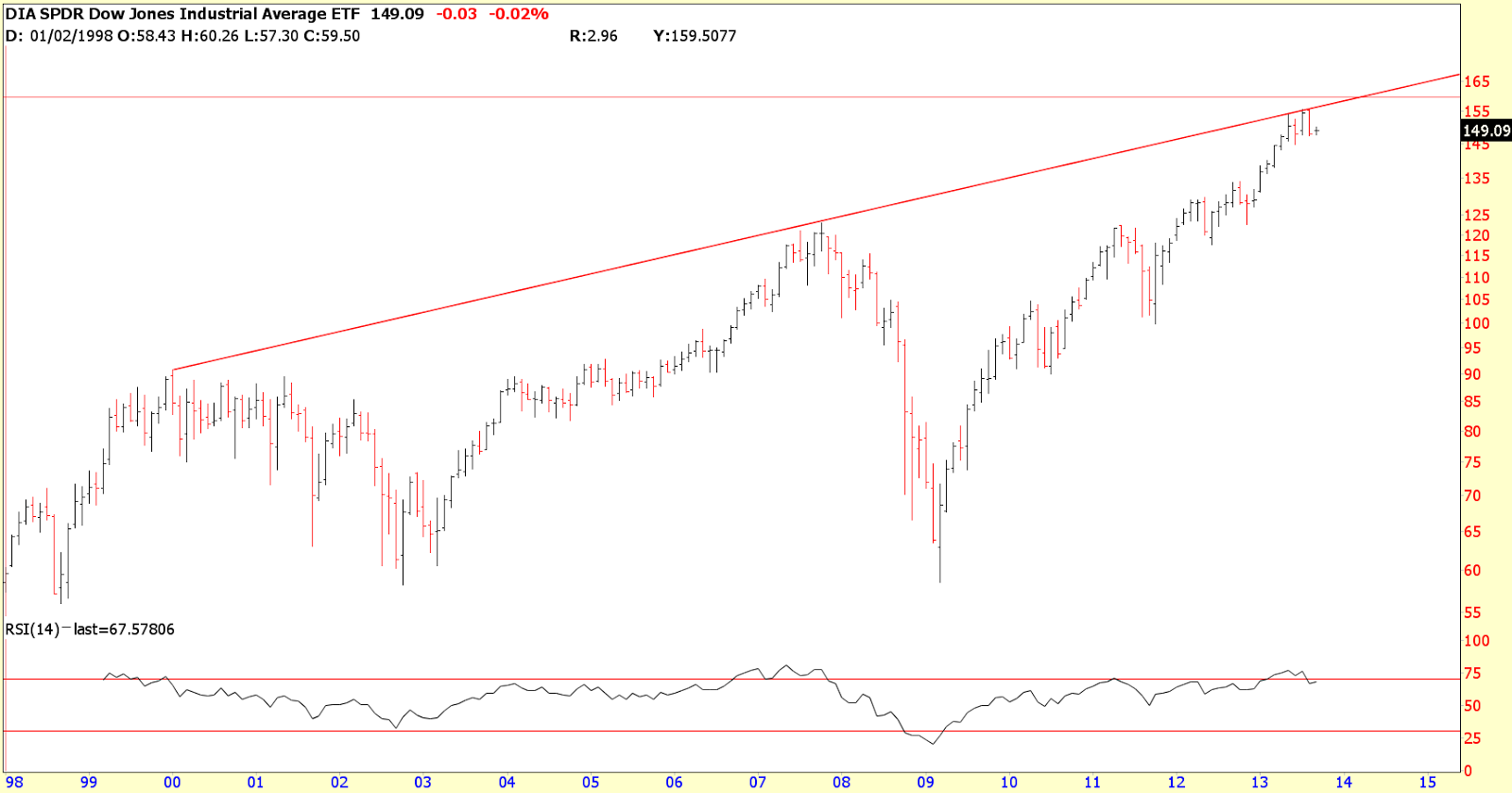 I would also point out that the last major megaphone pattern was back in the 1966 to 1973 period. In the S&P, the market never made it to the upper trendline. After the 1973 peak, the market melted down into the 1974 low and took out prior swing lows of the pattern in the process. 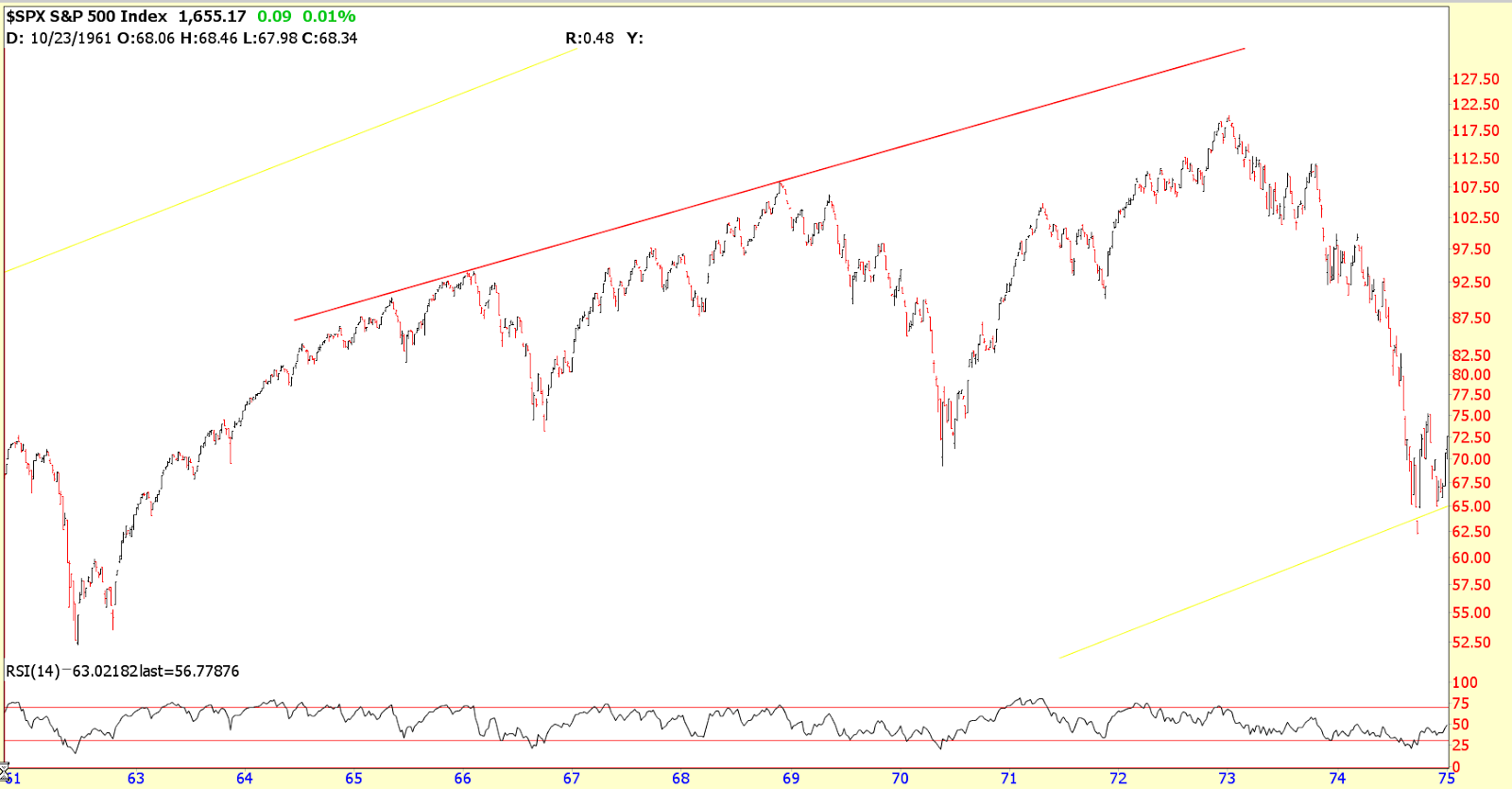 There are no guarantees when forecasting market movements, but the weight of the evidence I'm looking at (and have posted about) suggests we follow the path after the 1966-73 megaphone pattern. All I keep hearing is that everyone is bearish, this is the most hated bull market ever, and the fed will not allow the market to go down; so the market will keep climbing a wall of worry, the epicenter of wave 3 up is dead ahead, and watch the sky. Well that's a complete load of horse plop when there are all time record inflows to equity funds over the last few weeks - http://www.businessi...his-week-2013-9

I also posted a link to a chart a few weeks back showing margin debt at or near all time highs. You don't borrow money to leverage up in stocks if you're bearish.

Forget the polls and follow the money. The fat lady may or may not be singing yet, but she is at least clearing her throat. If the topping process continues, the latest date I have in 2013 for it to complete is around November 27.

There are ten separate sets of projections that point to 3380 - 3400 area basis NQ Emini-NASDAQ 100 Futures (continuous contract). There is no certainty in market forecasting, but there is a pretty high probability of a significant reversal or even a major top in this confluence area. There is also quite a lot of overhead resistance in the 3380-3400 area from the trading range of the 2000 top. As noted in prior post, the topping process may take more time to play out, but I think price is pretty nearly played out. If the 10/9 low is breached, the market is most likely going much lower. Two weekly closes above 3450 would likely invalidate this 3380 - 3400 confluence. Kimston

Well, I think the NDX has moved far enough to invalidate the previously posted confluence of projections to 3400 area. Time-wise, the stock market has rallied right into the late Nov projection (a few posts back) with the Dow missing by 6 points a perfect expression of fibonacci on the top tick reading of 16174 (so far). 16180 to 16200 would be a quite fascinating place to put in a major top from a fibonacci/numerology perspective. Timing points on the NDX are somewhat different than the SPX and DJIA. NDX time symmetries in my work suggests a pullback next week with a final high around 12/12/13. "IF" we get a pullback starting next week, I think the following is the most likely scenario I'm looking for:


Keep in mind, time and price projections have not worked well in the era of perpetual QE. DYODD.

As mentioned in the previous post in this thread, a superb target for a potential major top on the DJIA would be 16,180 to 16,200. Today's high was 16,194 and the close of 16,179.08 was less than one point off of a perfect 16,180. Of course this is a highly speculative observation, which hasn't been mentioned by anyone else that I'm aware of. We'll find out soon enough if the markets react to it. Kimston

what i can see is that the final wave up started late june 2013. i believe we are in the final leg of that final wave fwiw . to me if the dow trades under 15500 then the bull market is done fwiw. but first it has to do that ha ha. the bradley model for 2014 shows a large move starting at the beginning of the year so they will probably hold it up until then . we only have 4 trading days anyway so why not no point starting a decline now. but we are close to an important top im talking two to three weeks at the max.

Well, the market sliced through the 16,200 area, so no Fib salute there. The next big confluence in time is dead ahead - 1/10 to 1/13/14. Normally, I would think there is a very high probability of a top and beginning of a down leg in the next few days. There are some very long-term Fib timing projections and Gann price/time square projections that hit in this narrow window. If this doesn't kick off the biggest correction in the last 12 months, I would say this time confluence has failed as well. We'll see very soon. In my analysis, the next time window (after this current one) for a potential important top doesn't occur until late March 2014. Kimston

well i would say this. i expect the top early this coming week fwiw. so many stocks have already topped. lets say a top in by wed jan 22 also around the change of the sign fwiw. and im talking a major top the beginning of a bear market. its all as clear as mud