The Atlantic crucible of hurricanes hasn’t had a storm all month and if the calm holds it will stand as the quietest August in 25 years.

The expanse of ocean between Africa and the Caribbean Sea has only had two stormless Augusts in more than seven decades of recordkeeping -- one in 1961 and the other in 1997, said Phil Klotzbach, lead author of Colorado State University’s seasonal storm forecast. August typically is the beginning of the hurricane season’s most-active phase.

What? Wait. Where's the warming?

The country faces "a serious climate catastrophe" according to one government official, who noted that some regions look like they're "part of the ocean" following weeks of exceptionally heavy monsoon rain.

Trust the science...Really? Which scientist?

"They ignored his science that said there’s been big droughts."

How a 100-year-old miscalculation drained the Colorado River

We’ve reached the point where the reservoirs are no less than a third full in terms of the available water supply that we might use. We’re at the danger point.

In the early 20th century, the US Geological Survey sent out this guy named Eugene Clyde LaRue to try and measure the Colorado River. LaRue started to see that, beyond the time horizon that we’d been measuring the river so far [a couple of recent decades], there were some really big droughts. He concluded in a 1916 report that the river is subject to big droughts on timescales of 10-to-20 to 50-to-100 years. It doesn’t just stay wet.

The negotiators of the Colorado River Compact — the foundational document for figuring out how to divide up the river and decide who gets what — needed this information. They needed science. But they came together to figure this out without LaRue. They sidelined him. They ignored his science that said there’s been big droughts.

Instead, the negotiators looked at a much more recent period [of time] that had been extraordinarily and unusually wet. They said the river’s got plenty of water to build all these farms and to build all these cities. They just ignored the science because it was inconvenient.

Negotiators believed — and negotiated a deal that said — there was as much as 20 million acre-feet flowing from the river each year. LaRue’s estimate was closer to 15 million. Today, we know it’s 12 million.  It was a big gap.

“They were told that there was enough water. That turns out to have been bogus.”

"NO MORE SNOW" was the declared "scientific consensus" just a few decades ago with only the real scientists dismissing the  fear-mongers' claims.

But some never learn...

At least 3 dead as emergency crews have rescued numerous stranded motorists in a "river of white" on roadways across the region as officials order a travel ban for all of Buffalo with snowfall totals eclipsing the 6-foot mark -- and more snow is on the way.

The previous record was 7.6 inches, which was set in 2014 during the historic and deadly ‘Snowvember’ event that dropped close to 7 feet of snow across parts of western New York from Nov. 17-21, 2014...BLASPHEMY...or reality?

Northern Greenland  was once 50-60f degrees warmer than now!

The northern peninsula of Greenland, now a polar desert, once featured boreal forests of poplar and birch trees teeming with wildlife.

The region was once home to mastodons, lemmings, geese, (even Vikings!)

It offers unprecedented insights into how climate change can shape ecosystems.
Willerslev and colleagues worked for 16 years on the project, which resulted in the DNA of 41 samples found hidden in clay and quartz being sequenced and identified.
The sediment, tucked in the mouth of a fjord in the Arctic Ocean in Greenland’s northernmost point, was eventually preserved in ice or permafrost and lay undisturbed by humans for 2m years.
“The data suggests that more species can evolve and adapt to wildly varying temperatures than previously thought,” said Dr Mikkel Pedersen, of the Lundbeck Foundation GeoGenetics Centre at the University of Copenhagen and co-first author.

So do we  "Follow the science," or the Globalist's agenda-driven hype? 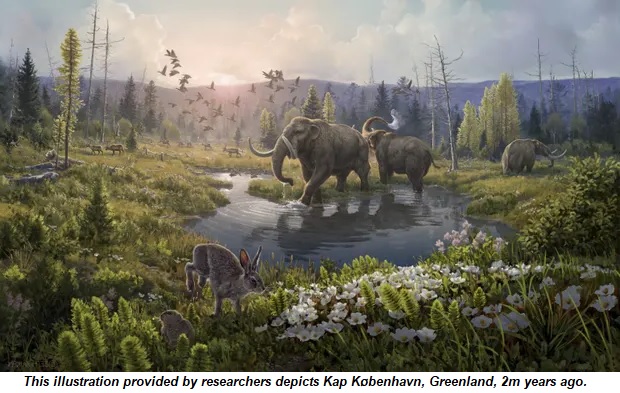 "Settled Science" said 20+ years ago that in 20 years there will be no more snow!

OOPS!
January 2015: California Officials Measure One of the Highest Snowpack in 40 years
The California Department of Water Resources conducted the first manual snowpack survey of the year this week at Phillips Station near Lake Tahoe. They found 55.5 inches of snow depth, which is 177% higher than average for the location.

Ayn Rand:
"Whenever you think that you are facing a contradiction, check your premises. You will find that one of them is wrong.” 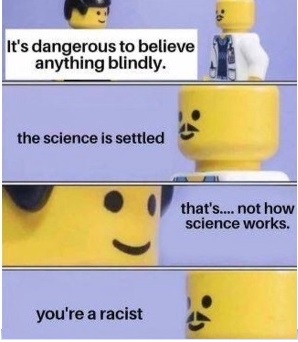 So do we  "Follow the science," or the Globalist's agenda-driven hype?

“Children just aren’t going to know what snow is."

According to Dr David Viner, a senior research scientist at the climatic research unit (CRU) of the University of East Anglia, within a few years winter snowfall will become “a very rare and exciting event”. “Children just aren’t going to know what snow is,” he said..

Ten years later,  England and Western Europe had three very cold winters in a row, and the UK experienced its coldest December since records were kept.

A potent winter storm set to wallop more than 1,700 miles of the United States with heavy, travel-disrupting snow.

So do we  "Follow the real science," or the Globalist's agenda-driven "Science" hype?

For all of you "real" scientists out there, you were correct! It still snows!!!

"30 feet of snow? That much has fallen in some places in California as snow blankets huge swaths of state. Snow is blanketing huge swaths of California after a series of storms, but the news is particularly good for the Sierra snowpack, which supplies 30% of the state's water."