2 replies to this topic

A Crypto-Trading Hamster Performs Better Than Warren Buffett, Nasdaq and The S&P 500

It's designed so that when Mr. Goxx runs on the hamster wheel, he can select among dozens of cryptocurrencies. Then, deciding between two tunnels, he chooses whether to buy or sell. According to the Twitch account for the hamster, his decision is sent over to a real trading platform — and yes, real money is involved.

His portfolio is up nearly 20% since he started trading in June.

As of Sept. 12, Mr. Goxx was performing better than Bitcoin, the Nasdaq 100, Warren Buffett's Berkshire Hathaway and the S&P 500

Speaking of coins and intelligence that matches that of hamsters, we have this coming from Bolsheviks in Washington: https://tinyurl.com/yge28aez

The natives of Yap in Micronesia went 300 miles to the Palau Islands for "stone money", great calcite disks, six to twelve feet in diameter.

Economists love it because it helps answer this really basic question: What is money?

It's unclear if these stones started as money. But at some point the people on Yap realized what most societies realize. They needed something that everyone agrees you can use to pay for stuff.

And like many societies, the people of Yap took the thing they had that was pretty — their version of gold — and decided that was money.

A piece of stone money was really valuable; you wouldn't use it for some everyday purchase. You'd use it for something big — a daughter's dowry, say.

"If somebody was in real dire straits, and something happened to their crop of food or they were running low on provisions and they had some stone money, they might trade," says Scott Fitzpatrick, an anthropologist at North Carolina State University who is an expert on Yap. 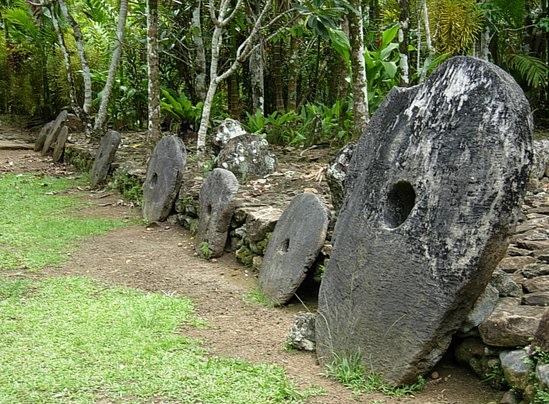