Whichever way this finally resolves, likely market as whole goes with it.... 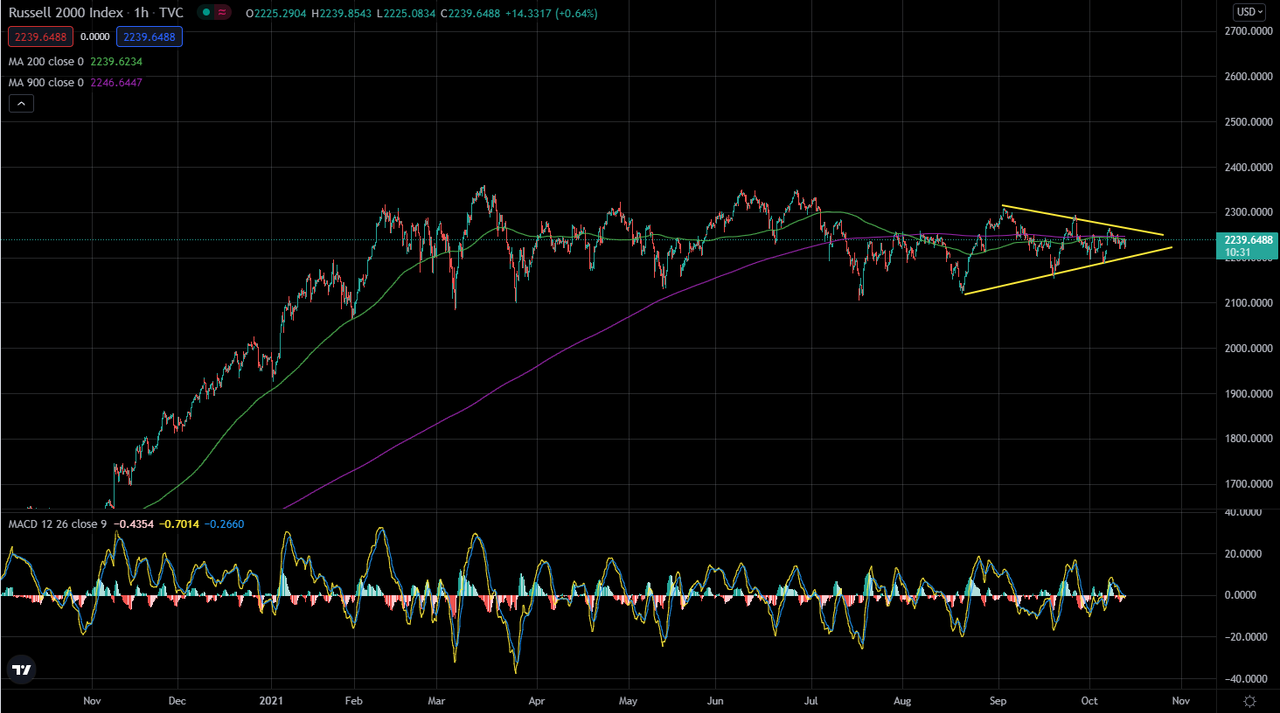 Through October 8th...apexes are always fun!

Yes...there are currently 2032 issues making up the Russell at this time.

A pre-markets primer packed with news, trends and ideas. Plus, up-to-the-minute market data.

“We’re moving into this middle part of the market cycle where fundamentals become a lot more important than macro factors,” said Emily Roland, co-chief investment strategist at John Hancock Investment Management. “The markets are going through some growing pains.”

Investors worry that rising inflation will eat into corporate profit margins and potentially spur the Federal Reserve to accelerate its plans to lift interest rates.

“I think the Fed might be forced to raise rates quicker than they want to,” said Carter Henderson, portfolio manager at Fort Pitt Capital Group. “Inflation, in my eyes, is not transitory.”

The central bank signaled last month that it was prepared to begin reversing its pandemic stimulus programs in November and could raise interest rates next year. Meeting minutes released Wednesday showed Fed officials reviewed plans to possibly end their asset purchases by the middle of 2022.

Third-quarter earnings season kicked off this week, and investors are parsing results for signs that supply-chain bottlenecks and higher costs for raw materials are eroding profits.

Several household-name companies reported earnings Wednesday. BlackRock shares rose $31.62, or 3.8%, to $867.81 after the money-management company reported revenue and profit that beat analysts’ expectations. JPMorgan ‘s earnings per share came in above Wall Street’s projections but the bank’s shares fell $4.36, or 2.6%, to $161.

Delta Air Lines shares dropped $2.51, or 5.8%, to $41.03 after the company posted a quarterly profit but said it faced pressure from rising fuel prices.

“Have we passed the point of the sweet spot—low costs and explosive demand, to a point where demand is softening and costs are picking up? We do expect to see some signs of that starting to emerge,” said Sebastian Mackay, a multiasset fund manager at Invesco. “I do believe we’ll be in a more rocky patch for equities, where they will be moving sideways or possibly down a little bit.”

The oil-price rally halted following a report that suggested Iran nuclear talks could recommence as soon as this week, prompting some traders to price in a potential higher supply of crude to the market. Global benchmark Brent crude dropped 0.3% to $83.18.

Tempered demand due to the sharp rise in energy prices may also be contributing to the stabilization, according to Mr. Mackay.

“We are probably entering the stage where prices have moved up so quickly that we are now getting a demand response—people are reining in spending and that starts to balance the market a little bit,” he said.

More stable oil prices will weigh on market participants’ expectations for inflation, at least in the short term, according to Michael Hewson, a chief market analyst at CMC Markets.

Overseas, the pan-continental Stoxx Europe 600 rose 0.7%. In Asia, major benchmarks were mixed. The Shanghai Composite Index added 0.4% while Japan’s Nikkei 225 slid 0.3%. Markets in Hong Kong were closed due to a typhoon.

thsi is stuch a massive amount of sideways cause, but leading to WHAT ?

we got quite the ugly candlestick to close Friday, this was not the case with the other indices...

maybe russell plummet down next week ?

www.BESTONLINETRADES.com
Back to Fearless Forecasters