24 replies to this topic

Several vehicles were still on fire around 2:30 p.m. ET.

THE SNOW DIDN'T DISAPPEAR, THE EXPERT "SCIENTIST" DID!

According to Dr David Viner, a senior research scientist at the climatic research unit (CRU) of the University of East Anglia ,within a few years winter snowfall will become “a very rare and exciting event”. “Children just aren’t going to know what snow is,” he said.

A foot of snow, blizzard conditions to threaten central US

"A swath of heavy snow is expected to linger and be slow moving, allowing for perhaps 2-3 feet of snow to pile up in some locations before the snow ends," said AccuWeather Senior Meteorologist Alex Sosnowski. AccuWeather meteorologists are forecasting an AccuWeather Local StormMax™ of 40 inches (100 cm).

"Blizzard conditions are likely to unfold as the storm gains strength, snow piles up and winds increase," said AccuWeather Meteorologist Brandon Buckingham. Extensive blowing and drifting snow can occur which could result in road closures close due to high-velocity winds and massive drifts.

Portions of interstates were shut down and numerous traffic accidents were reported amid a blast of winter weather on the second day of May in the Nebraska Panhandle. 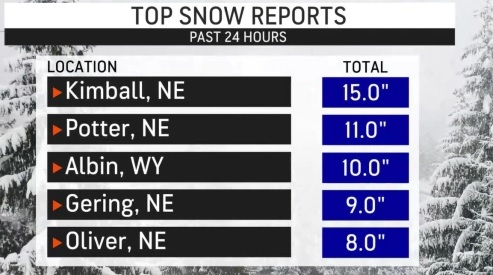 May in the Mile High City: Heavy snowfall forecast for Denver area

The calendar may read mid-May but parts of Colorado, including the Denver metro area, are bracing for a storm that would make winter proud.

Winter storm watches and warnings were in effect across a large section of Colorado and northward into Wyoming, and for good reason. AccuWeather meteorologists are calling for 3-6 inches of accumulation in downtown Denver and some places on the southern and western side of the Denver metro area could see as much as a foot of snow, enough to potentially result in widespread power outages.