Risk Windows and a Lame Excuse

According to my risk summation system, the days this coming first week or so of 2022 with the highest risk of a turn in or acceleration of the current trend in the DJIA are Wednesday the 5th, Thursday the 6th and the following Monday the 10th of January.

This past week the risk window system calling for turns on Tuesday and Friday was 0 for 2 in a pretty dismal final showing of 2021, but in its defence the end of year window dressing machinations of the market participants appeared to be rather pronounced possibly drowning out any cyclical effects, at least that's the best lame excuse that I can come up with for the system's abysmal performance other than it was just taking the holiday off.  Actual turns in the DJIA were a low on Monday and a top of some degree on Thursday.  At least my call for a strengthening Pound Sterling still appears to be OK.

Speaking of taking the holidays off, the FED taper crew let the 2 year note yield slide lower last week even though the economic data was as strong as Tennessee moonshine.  They clearly wanted to pump the Christmas cheer into the new year.  Well, all that holiday happiness crap is behind us now and it's put up or shut up time for the Eccles Building circus.  Either they intend to start draining the punch bowl or they've decided that the next economic downturn is surely just around the corner and even more funny money is needed, but they just want to do it on the Q.T. so they'll keep telling the public that they're tightening while the pumps are still running at maximum.  I guess any lame excuse will do if you're trying to CYA as I clearly demonstrated above.

Oh, and the contest between the AAII and TSP sentiment figures was won based on the DJIA by AAII since its low bullish number was a contrarian call for a rally.  This week the TSP bullish figure plunged from 73% to 53% even with the modest rally in the DJIA this past week.  The bulls in that survey must be more heavily invested in the broad Russell 2000 which was flat for the week.  Only 37.7% of the AAII crew are bullish.  I'm not sure what they are invested in to be so bearish, maybe covid stay at home stocks like Peloton which was peddling down hill to new lows for the year this past week.

Attached below are the plots that I was in too much of a hurry to attach to my post above.  First the hourly DJIA duly noting my risk windows from last week, which in retrospect, may be better characterized as an acceleration day on Tuesday with a gap and 500 point run and maybe a low turn on Friday if this coming Monday of the new year heads up strongly instead of the abject failures that I labelled them in my note above.  Second the British Pound which is rising to test the top of its recent channel, for my sake hopefully failing.  And third, poor Peloton peddling feverishly toward single digits if that big November gap is the measuring, midpoint variety. 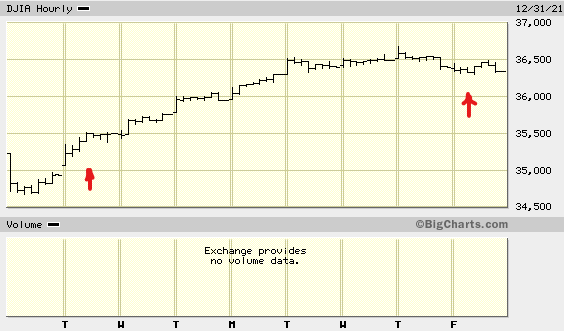