Risk Windows and A Slow Leak in the Super Bubble

According to my risk summation system, the days this coming week with the highest risk of a turn in or acceleration of the current trend in the DJIA are Monday January 10th and Friday the 14th.

This past week the system redeemed itself by tagging a top on Wednesday the 5th followed by a steep decline in the DJIA.  Whether it was a top for just the week or longer is still open to debate, but a top of some sort. 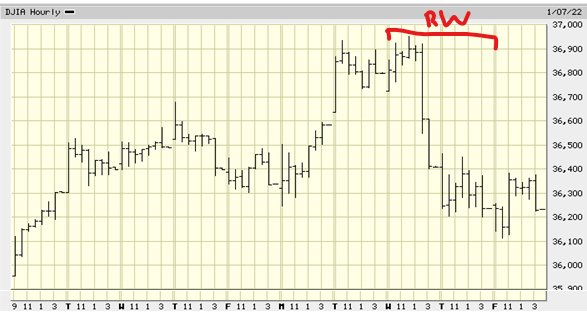 The action in the treasuries over the last several weeks may be dropping a hint as to what the FED's new tapering strategy is for letting the air out of the super bubble that it created.  It appears they intend to let the air out very slowly, not prick the behemoth least it get testy and burst laying waste to the grand house of cards they built.  The 2 year note is not crashing, but slipping down a little at a time.  The 30 year is being allowed to fall a bit faster, I suppose in an attempt to keep a positive yield curve to help out the banks and not spook everyone into thinking a recession is coming.  FED's in the past have never been able to pull off this slow escape from largess, but the FED has also never been able to slosh money around like drunk sailors for more than a decade and get away with it (so far at least), so maybe this FED can do what none have done before.  Mark me down as sceptical having been tricked before by these Svengalis.  The biggest fly in this slow application of the ointment strategy is the inflation that is simmering just one price rise away from boiling over scorching everything in its path.  If unleashed, this steaming, seething concoction will cook the FED's goose and probably bring an abrupt and unpleasant end to its go slow plans.  This should add extra interest in this coming week's inflation data on Monday, Wednesday and Thursday.

Douglas, you should have been a writer for the financial pages. You certainly have the knack.

The MFI "T" tool which I borrowed from Terry Laundry is the shown below for the DJIA.  This indicator projects that a top will occur in an index after a peak in the 14 period MFI at a time equal to the distance from that peak to the previous important low in the index itself.    My experience with this indicator is that it is not precise and should be used with a tolerance of a week or so given the length of this projection.  That would mean a top in the DJIA sometime in a window a week or so around the January full moon on the 17th.   This might even be generously stretched to include this past Wednesday's top if it's not exceeded by a week after the full moon.