Heads Up on the Uranium Mining Space


26 replies to this topic 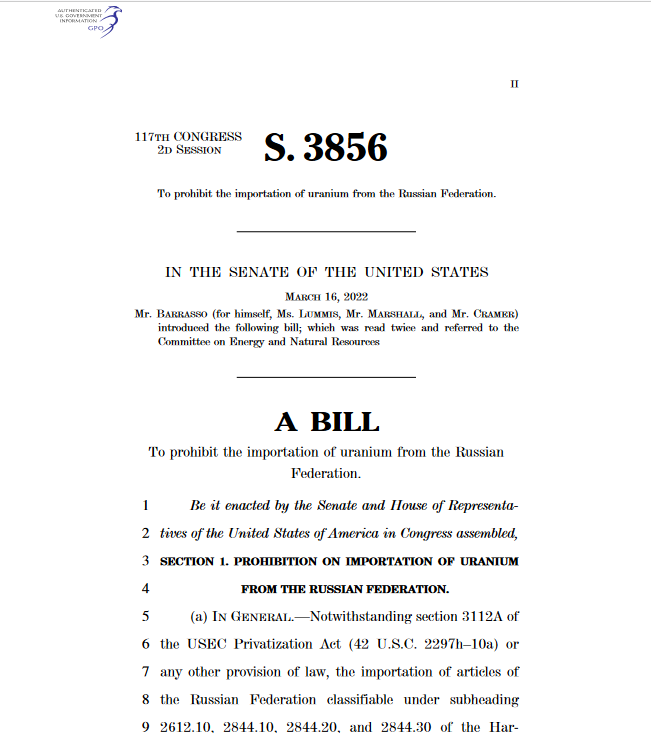 Probable?  With today's anti-Russian propaganda it is becoming much more likely with each day.
But anti-Russian rhetoric would be just a thinly disguised ruse.

I'm very patiently from Missouri on this one, though.

But wait...We're not the only one.  Even Russia is considering a ban on Uranium exports.

Plants must refuel every 18-24 months

who was urging a buy in Urannium miners in 2020 before a 4 bagger?

The probability that Senate Bill S.3856 will pass Congress & become law is highly probable in my opinion, but today S.3856 is old news (until it sees the light of day as law).

There's more to the story - other reasons as to why this is timely.

I'll explain as quickly as I can - graphically.

If you know how to read an Ephemeris and understand astral symbology, you'll get it. 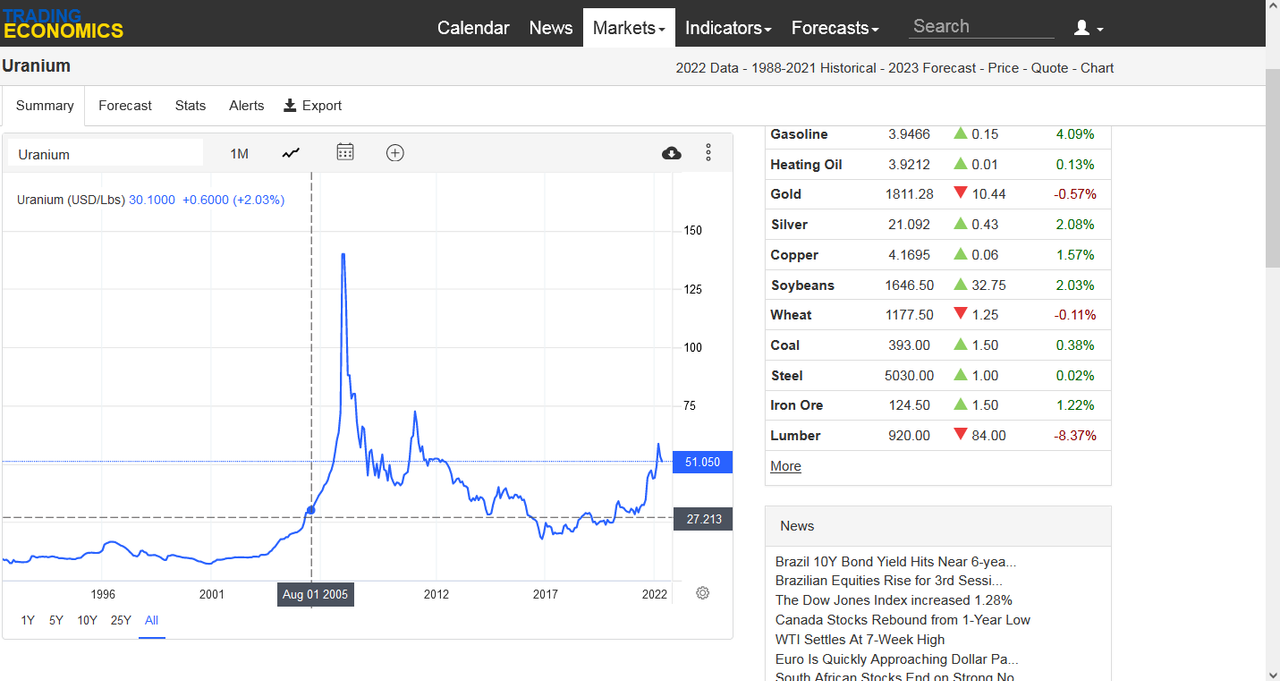 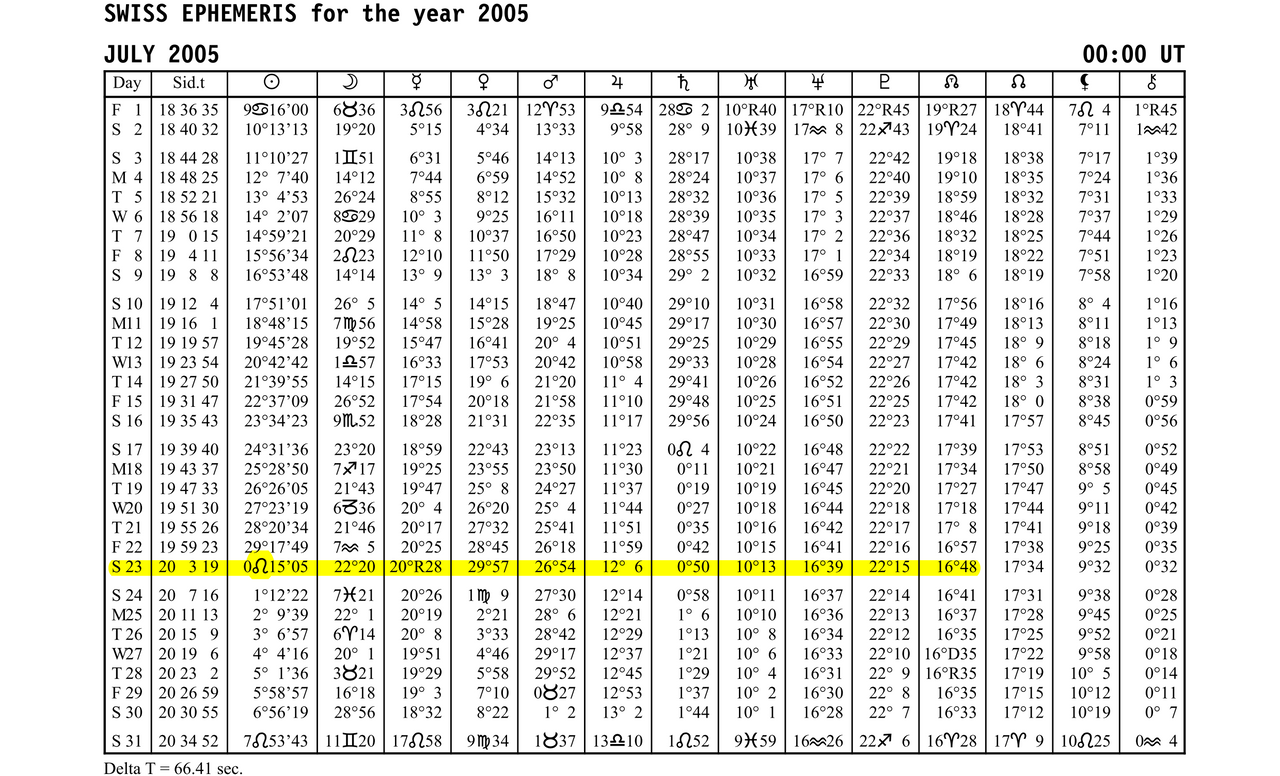 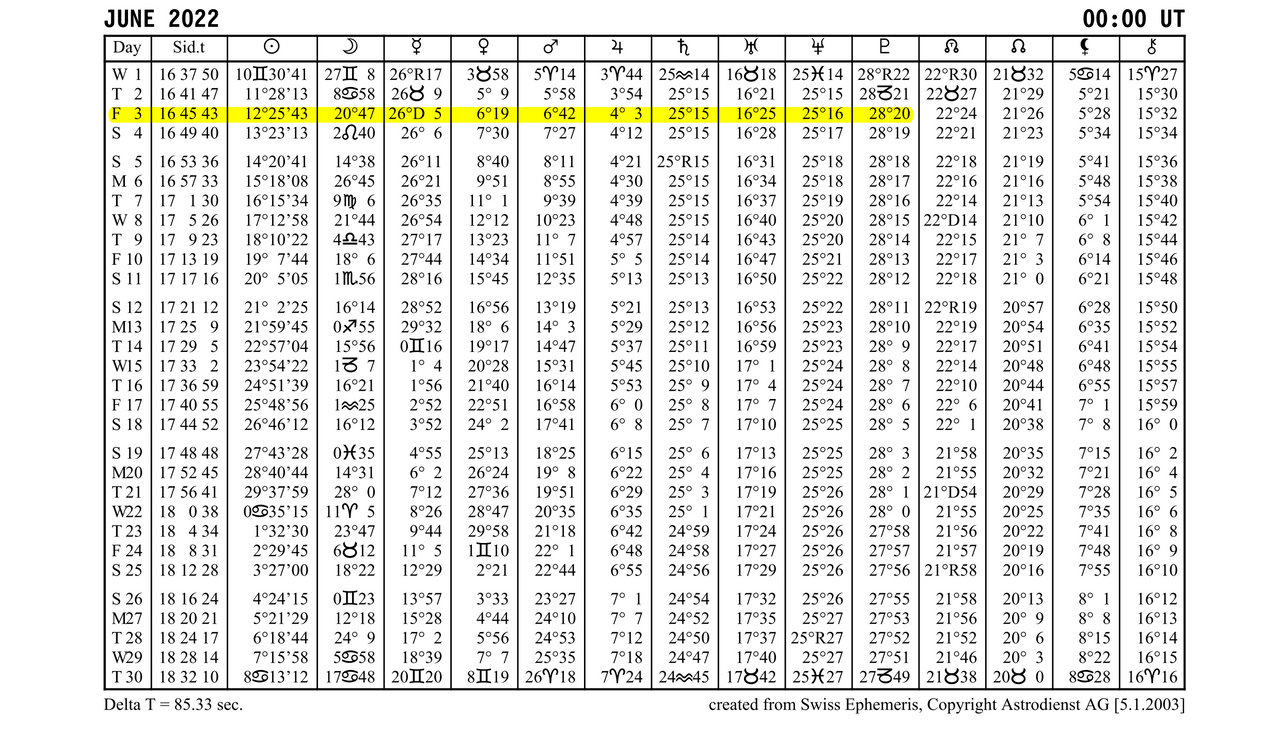 What do you see happening here?

When Mercury, Mars or Venus make a Rx Station or D. Station in 120 deg. aspect to Pluto, ruler of Uranium & all things nuclear, Uranium mining and the nuclear power industry experience a stimulus & values advance sharply.

In July, 2005 there was a Grand Trine between Mercury, Venus, Mars & Pluto.  You can see the power of that, as Uranium went parabolic.

That is what we have today (but not the Grand Trine - only Mercury as a trigger planet making its D. station) Mercury makes its D. Station @ 4:00:27 EDST on June 3.

It is a tight trine aspect (120 deg.), less than 2 degrees of arc. This is very tight and is, in astro terms, very significant.

120 deg. aspects represent uninterrupted, unobstructed flow of energy through the planets so configured and the astral symbolism represented by them receive a stimulus.

It is a very high probability that we will have another Uranium mining bull on our hands very shortly.

There are other examples but I don't have the time to post all the data points.

Sun can also be a trigger astral body when found in a cluster with the inner planets making a favorable 120 deg. aspect.

However, the real power behind such parabolic moves as illustrated here comes from the D. & Rx Stations of the inner planets,

either alone or in combination with the other planets forming a cluster.

There is a follow-on D. Station by Mercury in a 120 deg. aspect to Pluto on October 2nd as well.

This could be associated with a parabolic advance, as it is accompanied by a cluster transit with

This is the astral signature of a bull market in Uranium and all things associated. 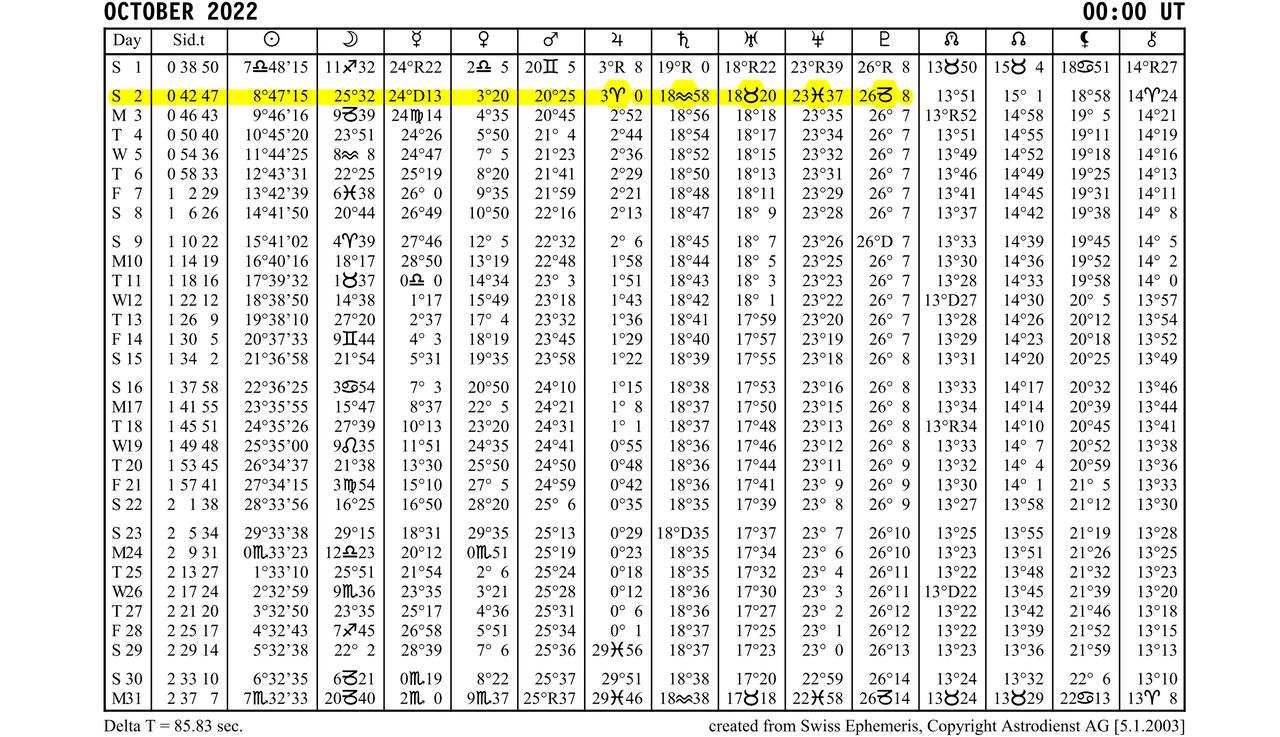 Do you have any comparable work for gold?

Smithy - I do have some work to post which is specific for the VanEck GDX & GDXJ.

Here is the image and link for the document from VanEck: 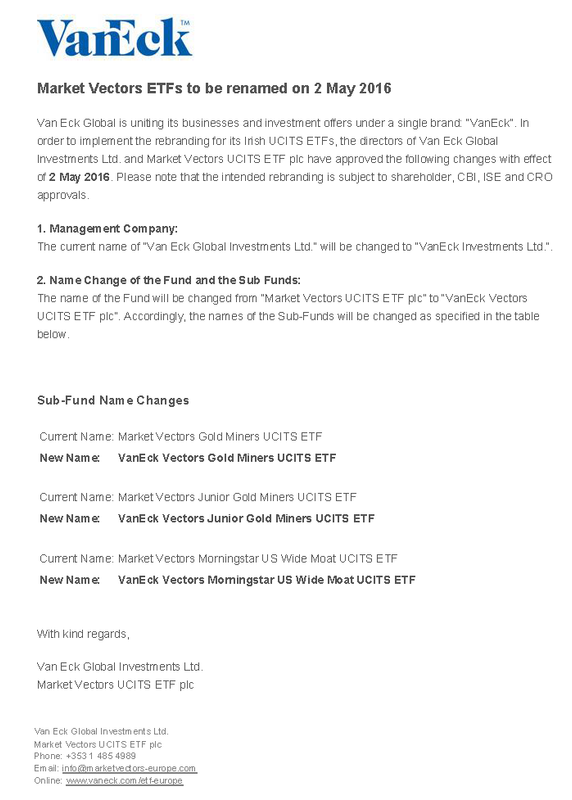 A name change is significant because a new entity is created.  The former names of a fund, ETF or equity no longer apply when a name change comes into play,
including the original name. 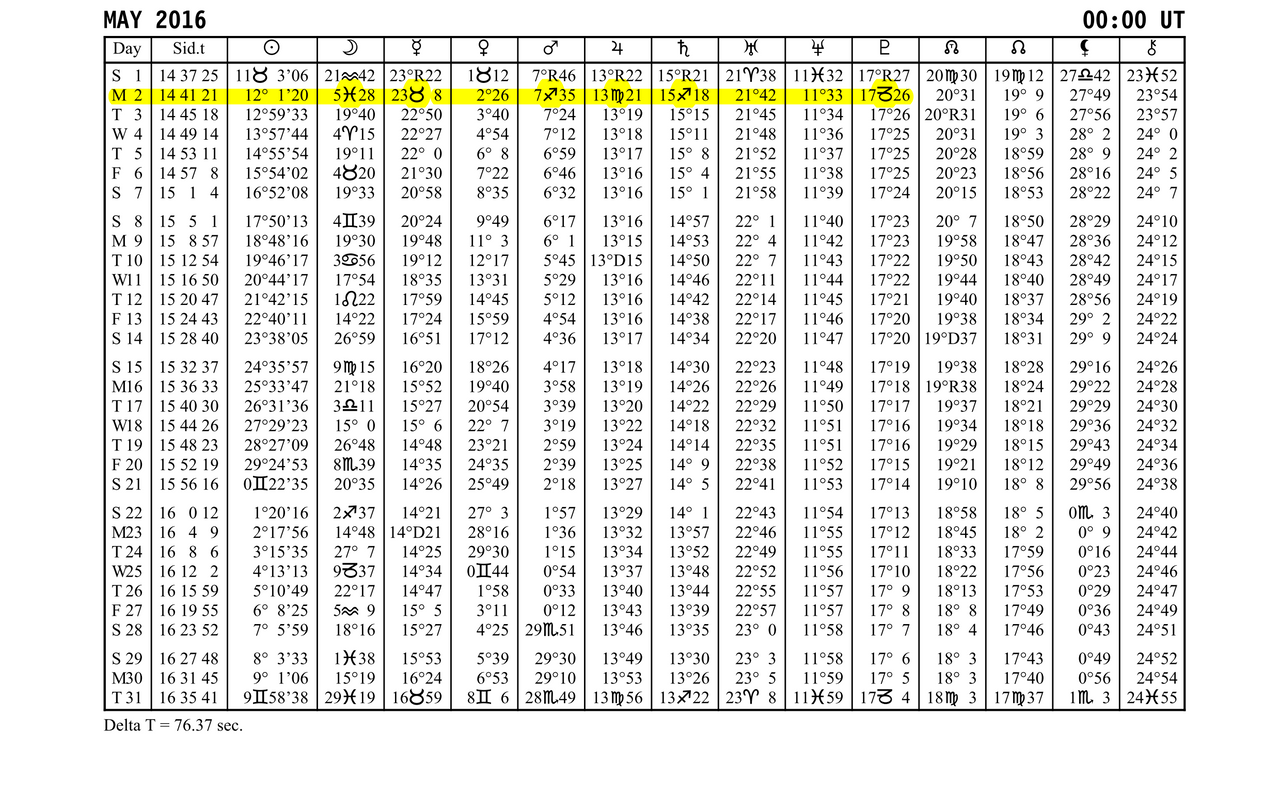 These positions are 0:00 UTC, which is 5 hrs. later than local time EST - so Mercury's position here is just a close approximation - nothing precise here
because we don't have a time stamp to kick out a chart for the VanEck document anyway.  This is good enough for general reference & discussion.

The whole point about Mercury's position is that it receives a stimulus from the current transiting Mercury's D. Station on June 3, 2022 @ 4:00:27 EDST, at
approximately, 26 Tropical Taurus from this Ephemeris - an orb of less than a degree.

Looking at the Stockcharts chart for $Gold, you'll see a point of inflection in the first week of June, 2016 as Mercury was beginning to make a second pass over the 26 deg. Taurus position.  As it got close to 23 Tropical Taurus you'll see that point of inflection occur with the conjunction of Moon over the general area of 26 Taurus on Friday, June 3rd, 2016.  Moon is a pointer to the controlling configuration & also functions as a Trigger which activates the stimulus configuration.

[This thing with the Tropical positions is a departure from what I usually do, which is the Sidereal Zodiac in Jyotish (Hindu Vedic Charting) using
the Lahiri Ayanamsha.  I'm just using these Tropical Ephemerides because they are easy to see & work with.  With no time stamp you can't run a chart, but a study of these D. & Rx. Stations conjoining approximate natal positions of the birth date of an entity like this is relevant & does show an expected result - which
is price stimulus]

The general principle is the stimulation of natal positions of whatever entity is being studied by these D. & Rx Stations, in this case, Mercury.