Risk Windows and Huff & Puff and Blow the Housing Market Down

According to my risk summation system, the day this week with the highest risk of a turn in or acceleration of the current trend in the DJIA is Tuesday June 21st.  The window which stretches from noon on Thursday the 23rd till Friday morning did get quite a few votes, just not enough to be classed a risk window, but there is something there worth keeping an eye on. 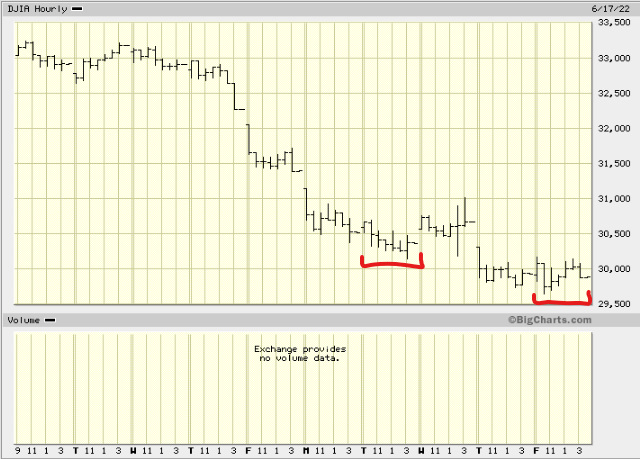 That Brent June 8th turn that I projected using the trend line intersection is starting to look important.  The selling was so fierce last Friday that some sort of bounce might be due.  The three big gaps in the hourly chart above are also screaming to be filled, so maybe energy will benefit from a broad market rally to fill them.

I believe we get two May housing sales numbers this coming week which might just show housing falling off a cliff.  The FED wolf huffing and puffing to cool inflation is also going to blow down the housing market which has been super fuelled by FED funny  money for years.  If the numbers are as bad as I suspect, the US may already be in the grips of a recession.  High prices are bad, but high prices when you loose your job is a lot worse.   If I'm right, I expect the FED to panic later this summer when the 2Q GDP number is released.  If negative, a recession has already started (assuming the 1Q number is not revised to be positive).  A plague, a war, inflation and now a recession, what kind of unholy Biblical mess are we living through?  All we need now are locusts and the picture will be complete.

We can thank those 81 million who voted for this because they did not like mean tweets.

Well, I was right about existing housing but dead wrong about new housing.  Data just released this Friday indicate a big jump in sales and a drop in average price.  The only excuse I can come up with for this late surge is folks on the low end rushing to buy before they are priced out by rising rates.  If I'm right about that, this number is showing future sales pulled forward, so the next report should be doubly bad.  Only time will tell.

Stock market bounce in full swing this morning in the window I noted above as worth watching.  If the window is valid, the rally should peter out in the afternoon.  Next week has a load of cycle turns and should produce some exciting action.  Very preliminary risk windows for next week are Monday the 27th and Wednesday the 29th, but I'll post my normal epistle this weekend confirming next week's dates.  Happy trading.