My DJIA Elliott Wave Count and a Glenn Neely Alternative

According to my primary Elliott Wave count, the DJIA should start heading higher in the next day or so or my count is probably crap.  Given my lack of skill in this dark art, the odds of the later are probably much better than those of the former.  Despite this lack of faith, there is a benefit to having a count, wrong or right, because it often says what must happen, not what will happen, but what must happen for the count being used to be valid which helps set stops. For example right now if the DJIA takes out the low on the 5th of July, my count is likely wrong.  If it takes out the low of June 17th, my count is definitely heading for the trash heap. 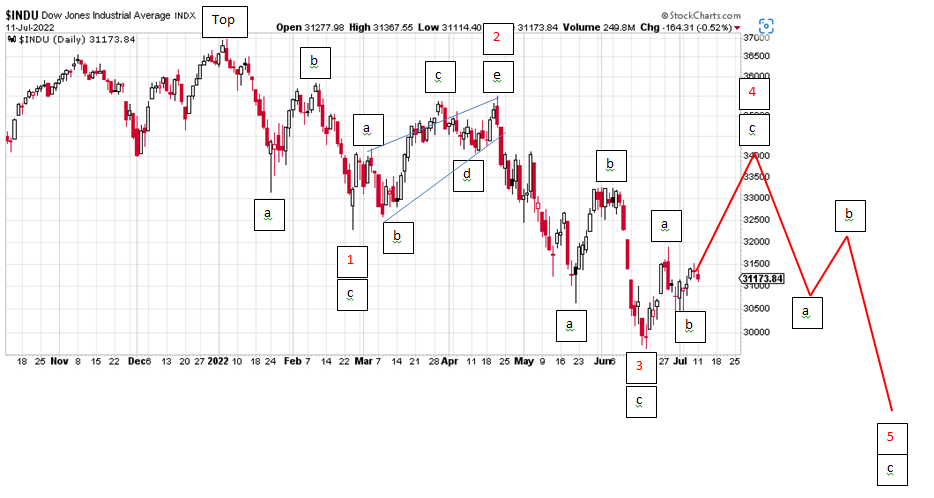 My count assumes the BLS massages the inflation numbers coming out tomorrow to be a bit more amenable, and FED heads hitting the stump start talking pause.  If the inflation numbers tomorrow are horrible AND Jerome or his minions come out talking really tough AND the market actually believes the talk, my count will probably die a miserable death tomorrow.

For an interesting, somewhat more bearish short term view and Elliott Wave count from someone (unlike me) who actually knows what he's talking about, take a look at Glenn Neely's post from the May time frame on youtube.com at ( NEoWave Market Update on S&P, Gold and T-Notes by Glenn Neely on May 8, 2022 - YouTube ).  His S&P short term count discussion starts at about minute 24 in the video.  If I understand what he's showing, he expects the current sell off to intensify, going down to somewhere near the pre-pandemic highs.

From what I remember from the 1970's, inflation was difficult to subdue. It went on year after year, feeding on itself.

I noticed stores are jacking up prices not by 8.6% but with 12-15% jumps, assuming people will assume it is just inflation and do not protest.

And another reason inflation will continue all through 2022 & at least half of 2023 is.....the employment in US is stronger than ever.

I have been in this country for 62 years as an adult, and never ever remember so many help wanted signs all over the place. So forget about recession for at least 12 months. Yes, there will be some shrinkage in the red hot housing market.

Of course black swan events can happen anytime. But assuming things will chug along at Biden speed, I see inflation to continue at double+ higher number than FED funds rate for next 12 months. Proceed with caution. SPX has good chance of reaching pre-pandemic values. JMHO.

pdx5, the current FED inflation fight is a joke.  The FED funds rate driving short term rates will only be 2.5% even if J. Powell raises it by the 3/4% on July 27th, but the reading on inflation he is fighting with this paltry funds rate is forecast to come in at 8.6% today even using the heavily redacted BLS calculation methods.  That means the real interest rate, even after the next tightening, will still only be minus 6.1%.

Having said the above, I do believe that the current tightening and high prices will choke low end consumers and drive down BLS reported inflation over time due to how it's calculated and due to consumer demand destruction, but real total inflation encompassing inflation hedges like real estate and the stock market which are not included in the BLS calculation will in all likelihood continue to roar ahead.  My fearless forecast is that this first FED success at taming inflation will in fairly short order fail since it is not addressing the unreported portion of the inflation beast resulting in an even more virulent inflation resurgence.  This pessimistic forecast shapes my longer term Elliot Wave count fearless forecast below which has the five wave pattern that I show above forming a larger "A" wave down followed by the "B" wave up when everyone thinks that the FED has beaten inflation, which is then followed by a big "C" wave down when the inflation reaccelerates, and the FED is finally forced to go full Volker on inflation really cranking up interest rates to finally put a stake in the inflation vampire's heart.

The early 2025 "Bottom" that I show completes an even larger degree 4th wave in my count at roughly the 50% retracement of the entire previous bull market which is then  followed by an enormous larger degree 5th wave rally such that 2025 finishes sharply higher as a year 5 is supposed to.  If you buy the above, I've also got a bridge in Brooklyn for sale, but as I've said before, you got to have a plan, but just date it, don't marry it.

Well, the inflation numbers weren't bad, they were horrible.  My short term Elliott Wave count is still alive since the DOW has not yet taken out the early July low, but it is on life support.  I might as well pull the plug and let it die a peaceful, well deserved death.  I suppose my new alternate count will be that the wave 3 of A is not yet finished, but I'm not going to waste time redrawing it until I see how bad the market reaction is over the next couple of days, and how the FED head and his minions try to spin the data and their response.  Thank goodness for pencils and erasers.

The numbers were so bad in fact that you have to think that maybe Glenn Neely's count expecting a plunge soon may be the right row to hoe.