Since Jerome wants to think he's channelling Paul Adolph Volker (he was born in 1927 before that middle name became verboten), I thought that I would post a few charts from tradingeconomics.com stretching way back to Volker's day in the FED hot seat. Given the current 9.1% inflation rate, the current 2 year note at 3.15% is a joke, a bad joke without a punchline.  To channel Volker that 2 year note needs to be a lot higher.  How high?  Well if you're a real ring tailed tom optimist and believe inflation will fall by half over the next year or so just due to demand destruction and magical supply chain self-repair, then the 2 year note yield still needs to double to provide a real yield and reduce that "low" level of inflation.

The nervous chatter today on CNBC that Jerome might be contemplating a 1% bump in late July is missing the point that he needs a 1% bump every month for the rest of this year to force the 2 year note to provide a real yield if you believe 9.1% inflation.  And the dollar, well the greenback should have its day in the sun if rates do head any where near that far north.

Do I think the above is going to happen in an election year?  Not a chance.  Ask Jimmy Carter, the peanut farmer turned president, he's 97 and still around somewhere in Georgia I assume, what happens to a president's party when a Volker type inflation attack is begun. 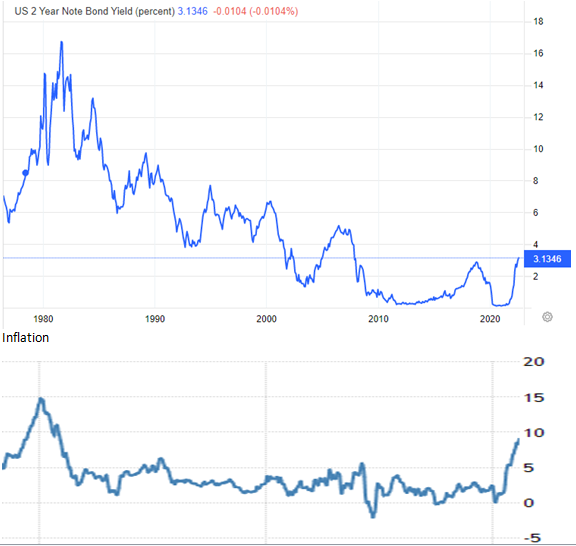 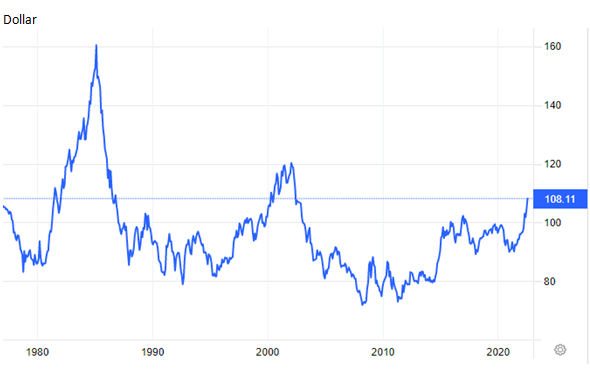 The PPI tells us that we have an even worse number ahead, but I think that halving home affordability in 6 months might have done the trick. Looking at copper and oil as well as the fed essentially telling us that we're in a recession, it may not be a bad idea to back off tightening.

If the current regime were attacking the supply side (i.e. not attacking but promoting), I'd definitely be advocating a pause by the Fed.

As Milton Friedman famously said “Inflation is always and everywhere a monetary phenomenon, in the sense that it is and can be produced only by a more rapid increase in the quantity of money than in output.”   Until the funny money printing is reigned in, inflation will grow.  The inflation may not be measured by the number crunchers at the BLS, but the inflation is never the less there, somewhere, hidden and lurking maybe at the high end just waiting to break into the main stream like it did after the pandemic, maybe in house prices, or stock prices, or Birkin bags, etc. none of which are in the CPI measurement, who knows.  If there is excess funny money, there's inflation.  The trick the government has used for donkey's years now is to not measure it, pretend it's not there particularly at the high end.  That scam fell apart when the funny money actually found its way into the hands of the hoi polloi during the covid giveaways.  This drove up measured inflation.  The current gentle tightening may put that genie back in the bottle by further impoverishing the already poor, but the underlying inflation will still be there as long as all the funny money printing remains.

Friedman was astutely incisive on his take on inflation.
This year we have inflation in CPI.
We had inflation for many years before this year because FED was busy creating $9,000,000,000,000 credit book for many years. The inflation manifested in stock prices and real estate bloat, both exacerbated by artificially low interest rates.

Like professor Friedman postulates, when money supply exceeds increases in productivity and domestic output, inflation will manifest in some form.

I've said before and will say it again, the upcoming lift will be the last one in my view no matter what it is, maybe not if they only go .25.  Debt is to high so they have to decide if they want to cause a depression not a recession.  Do believe housing will see a large pullback as I saw a chart on twitter that was unbelivable, a -50% haircut no but -20-30% for sure and then flat for at least 5 years along with everything else and stocks grind to a bottom about another -20%lower but that's gonna take quite awhile, ain't gonna crash there.  People need to get back to reality as the everything bubble deflates and that will take a long time to adjust....