According to my risk summation system, the days this coming week with the highest risk of a turn in or acceleration of the current trend in the DJIA are Tuesday August 9th and Friday August 12th.

Last week was the mess that I predicted unfolding as something of a flat consolidation or a triangle if you squint at the chart below long enough.  The risk windows on Monday, noon Tuesday - noon Wednesday and Friday caught minor swing turns but nothing major. 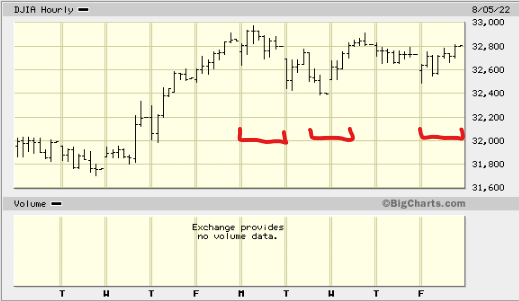 During the week I posted a plot of AAPL with a nice interior channel in response to an andr99 post.  The channel failed literally before the ink was dry on my response with AAPL  breaking out the top.  AAPL now appears to be coming back to test the line that it just broke.  It  just goes to show you that no matter how good a pattern looks, price is the ultimate indicator.

Last week it became patently clear that the Fed has lost absolutely all credibility.  Despite a string of Fed minions hitting the podium and swearing that they really truly are serious about cranking up rates to fight inflation, both the bond and stock markets literally laughed out loud and shrugged off the negativity.  Only SF governor Mary Daly, who apparently is the current designated Fed Marie Antoinette, spoke the truth noting that she couldn't personally see any impact from inflation from her financial mountain top position.   To regain any hope of market respect, the Fed is going to have to hit the market with a hammer, maybe a mid-meeting hammer in August.