Risk Windows for the Week of November 7th & Fed Fake

According to my risk summation system, the days this coming week with the highest risk of a turn in or acceleration of the current trend in the DJIA are Monday November 7th, Wednesday the 9th and Friday the 11th, maybe another "W" or "M" shaped week will result.

Last week the risk summation system identified a big cloud of risk stretching from Wednesday November 2nd thru Friday the 4th which I posited might see wild swings up & down.  I think that the moves of about 1350 points from Wednesday's high to Thursdays low and another almost 900 points back up from the Thursday low up to the Friday high qualifies as pretty wild swings. 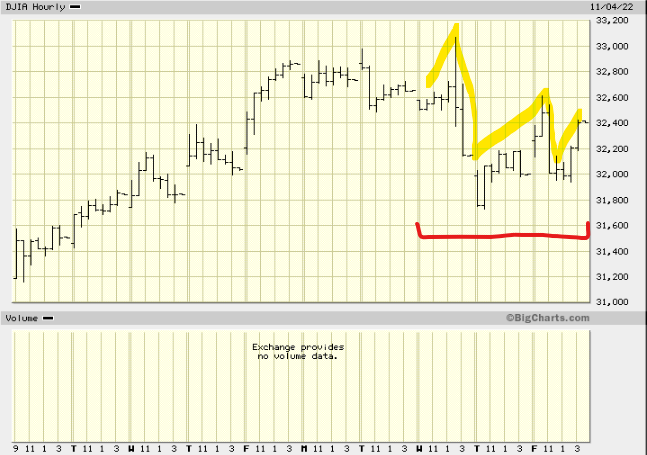 The 18-day cycle which I showed last week topped in the first few days of this past week and at least for now appears to still be working.  The next top for this cycle is ideally on Monday November 28th +/- a day.

After the Fed presser this past Wednesday I was left wondering if Powell even read the press release document issued before he spoke.  The other possibility is that the Fed is trying to sow as much confusion as possible to keep both bulls and bears off balance giving an advantage to neither, sort of a Fed head fake to use a sports analogy.

Confusion also reigns on this side of the pond, where the day after the Fed conflab we witnessed the truly bizarre BOE statement that longer dated interest rates which are currently less than half the rate of inflation here, were too high, just minutes after they raised the overnight lending rate.

Whether these central banks are intentionally trying to engage in a campaign of misdirection to keep the bond and stock markets off balance is not immediately apparent, but what is obvious is that they appear to be making this crap up on the fly and don't seem to have any firm conviction from one minute to the next as to what they're going to do or say next. Given this state of confusion, the wild swings in the stock market this past week make complete sense.

This coming Tuesday make sure to go out and vote early and vote often.  The risk window on Wednesday is probably well placed given the uncertainty surrounding the outcome.   The inflation figures and jobless claims numbers due out this coming Thursday morning probably should make Thursday a risk window too.   Maybe the risk window Friday is when the direction driven by those numbers exhausts itself and reverses.

Since the top in January of this year, the character of the AAII sentiment survey has been such that when the Bulls-Bears value approached zero during a countertrend up rally as seen at the little red "x's" in the plot below, the market has turned back down.  IF that character has changed and this time this difference near zero does not portend a reversal of the DJIA back down, it will be another signal that the low in the DJIA in October was important and the character of the market has changed.  If, on the other hand, the current move up fades and the DJIA returns to its downward trajectory, the bear is probably still in charge.

Of course, my current E-Wave count which I showed last week assumes that the low was important, so if the DJIA turns back down and makes a new low, the new count will need be waded up and filed in the trash can alongside its predecessor. 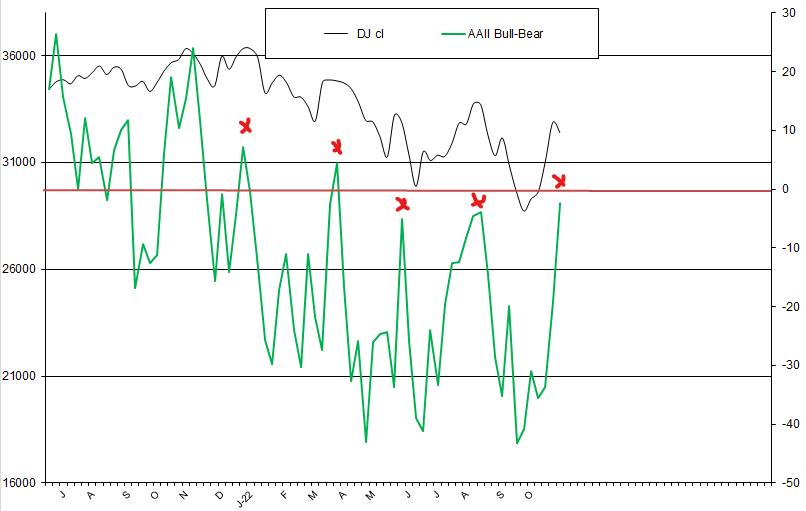 Curious what you mean by "vote often", don't you only have one vote??

12SPX, it was just my lame attempt at being funny.  Please see an explanation for the quote below from Wikipedia:

From Wikipedia, the free encyclopedia
Vote early and vote often is generally a tongue-in-cheek phrase used in relation to elections and the voting process. Though rarely considered a serious suggestion, the phrase theoretically encourages corrupt electoral activity, but is used mostly to suggest the occurrence of such corruption.[1]

The phrase had its origins in the United States in the mid-19th century and had an early appearance in Britain when a newspaper reprinted correspondence from an American solicitor. The phrase, however, did not find widespread use until the early 1900s when it was used in relation to the activities of organized crime figures in Chicago.

Since this post-election day market is starting to look a bit nasty, I thought that I would show a target for the sell off if my current E-Wave count which shows the sell-off is complete is crap.  Basically, I will revert back to the count that I previously threw in the trash can that says the 5th part of the current large "A" wave down is not complete.  A potential target using the S&P 500 index is shown below somewhere in the 3100 neighborhood at the end of the yellow line based on this "A" wave being roughly the same length as the covid sell off in 2020 as shown by the two large red arrows.  This also fits nicely with the hitting of the downward sloping red trend line laid under the lows in this current sell off.

Of course, if the market finds its footing tomorrow and heads back up, then this all has been a waste of ink and my current E-Wave count will be spared a trip to the trash can.