7 replies to this topic

I've followed Terry's musings the last few years and I find he always offers a great perspective on markets, particularly for the long term view. Terry has been eyeing an Aug. 26th high, based on a T construction originally drawn last year. I questioned that timing last year based on a projected 18 month cycle low (80 week) in that timeframe. The nominal Hurst cycle period for the 18 month cycle is due in Aug. The cycle low may come early at 70 weeks (July 1 low), but there is no clear evidence that it has arrived just yet. The 18 month cycle is a very large cycle and one not to ignore. Great trading opportunities can arise from its low, even in bearish markets.


Without diving into a full Hurst analysis, the current Hurst cycles status for the $SPX is as follows (this assumes that the 18 month cycle has not bottomed): 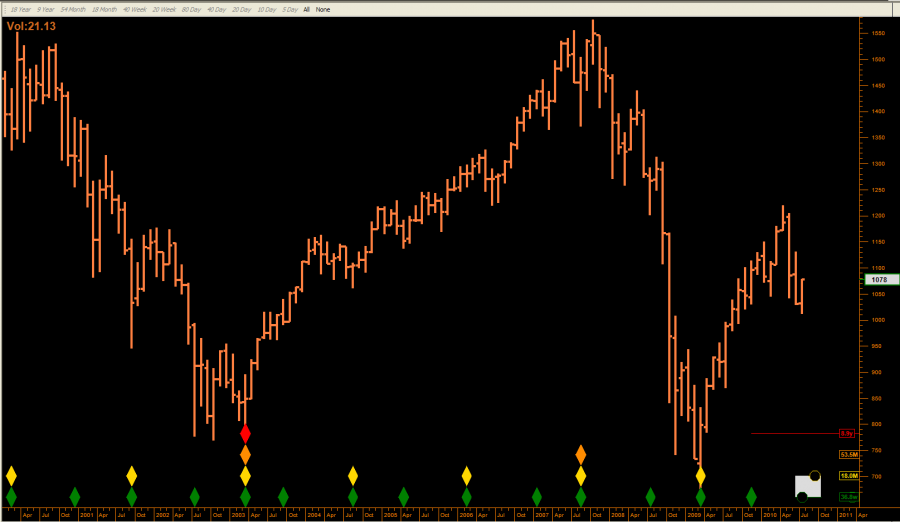 This brings me to Terry's latest T Theory observations. I've taken the liberty to indicate all 18 month cycle lows on this $SPX vs $NYAD chart posted this week. The thing that struck me was how modest the correction appears in terms of the $NYAD plot. All 18 month cycles lows in the last decade were preceeded by a touch or break of the moving average shown. I don't know how this chart was derived. But it appears to me that a significant low is still ahead based on this chart. 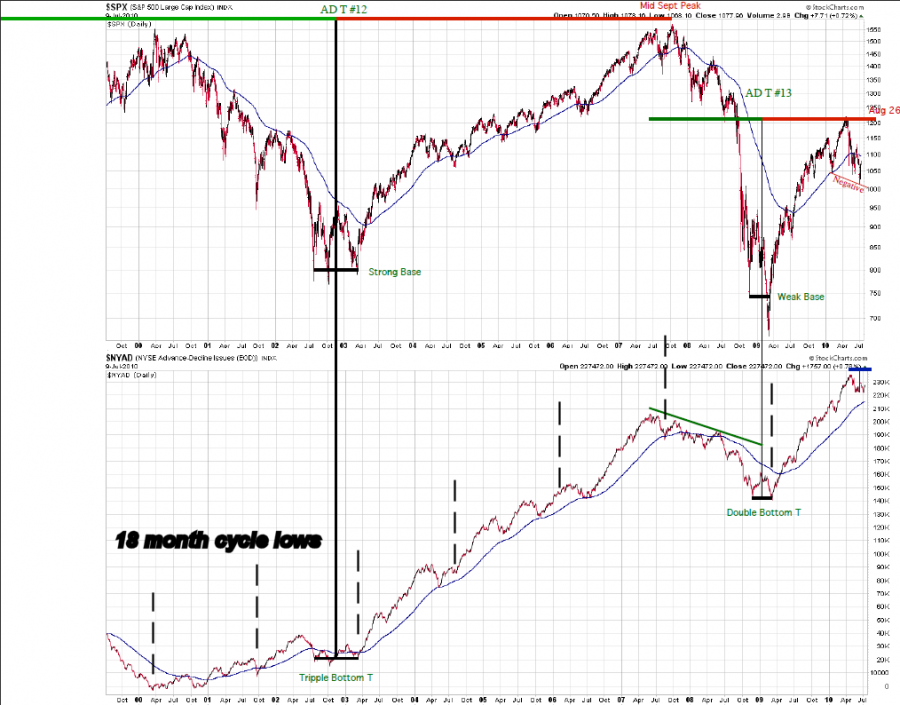 "By the Law of Periodical Repetition, everything which has happened once must happen again and again and again-and not capriciously, but at regular periods, and each thing in its own period, not another's, and each obeying its own law ..." - Mark Twain

Thanks John! Always appreciate your view.

Nice Hurst work John.
In yesterday's update, Terry sounded very iffy about the potential of much of a rally into late August.
However since his volume oscillator did show the potential, he displayed it.
Often he speculates about "potentials" in the future and some take it that he was bullish.
I think I heard him say: "We don't know."
In another month, the top of his price envelope will be nearer 1120ish.
I believe he has a bearish T followed right behind by a bullish one, followed by a bearish one.
The kind of action you would expect in a weak market.
Get some popcorn and enjoy the movie.
CHART

"It's not the knowing that is difficult, but the doing"

Nav why are you laughing? I would say that has high probability

Love, be kind to one another, seek the truth, walk the narrow path between the ying and the yang.

What happened to your bp shorts? dont see why its going down

The market catches almost everyone on the wrong side. We always seem to get fake break out before that huge dump or the hugh dump before the false break down! Trade Safe!