Rounding the corner for home against Covid - Surge States update

You, are right, I am probably confused.

haha even the media is not omni-potent, and a few non-fake items sneak through.

90% of media articles are skewed towards fake news.

haha even the media is not omni-potent, and a few non-fake items sneak through.

90% of media articles are skewed towards fake news.

I love this interview. Finally Fox let's some reality drop in for a visit.  Trump has famously denied responsibility for any of this (the total botch of the US virus response) and now he says he takes responsibility for everything and starts ranting about PPE and ventilators and testing (all of which, even after all these months, are in dire short supply, and desperate people are sitting in double-digit heat in Arizona for hours to get tests they won't get results from for days. Does he take responsibility for 140,000 dead Americans and for pressuring too early re-openings after insufficient lock downs that have the numbers rocking again? Nah, he's got a golf outing planned.

At the beginning of the interview Wallace shows him the charts of the virus out of control again and he says he's been told we have lowest death rate. When Wallace flat says "that's not true" (thank you, Fox News, for making your regular viewers throw up their Sunday brunch in shock), Trumps get upset and tells his people to get him the death numbers. Kayleigh McEnany jumps to and hands him a talking-point flash card that says lowest Covid-19 death rate. A flash card. That's where he gets his information.  I have to admit that moment was so funny I almost pissed my pants.

Later on there are questions about the time he declared at Mt. Rushmore that "schools are teaching children to hate America." If he believes that why is he so determined to reopen them? He is just gibberish from the top flop to the bottom bone spurs.

Okay, enough of this. When Trump isn't outright lying, he's just showing his utter ignorance. I suppose some would call that progress.

Next to California, which again has a huge number of the most populous counties in the USA (4 of the top 10), starting with LA County at number 1 (by far)

One of the nice things LA County's charting confirms, is another prediction I made that there would be plenty of cases in the surge move, but that that they would be FAR less deadly, and this chart shows that very nicely....as the Epi Case curve begins to roll. 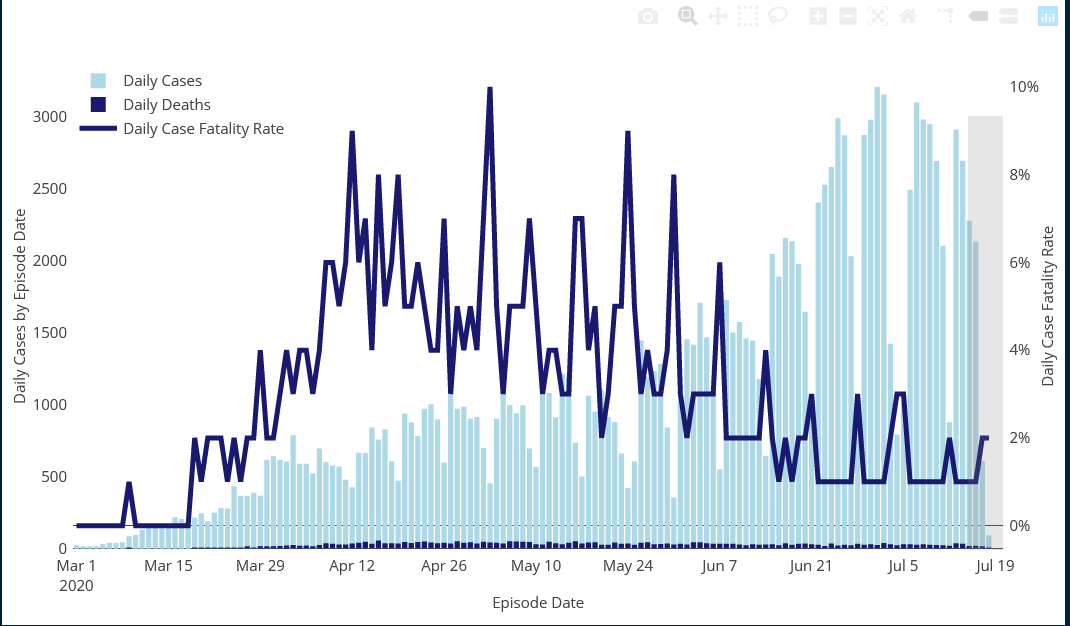 And the massive ramp up in deaths just does not seem to be happening in the country's largest county...tick tock...running outta time.... 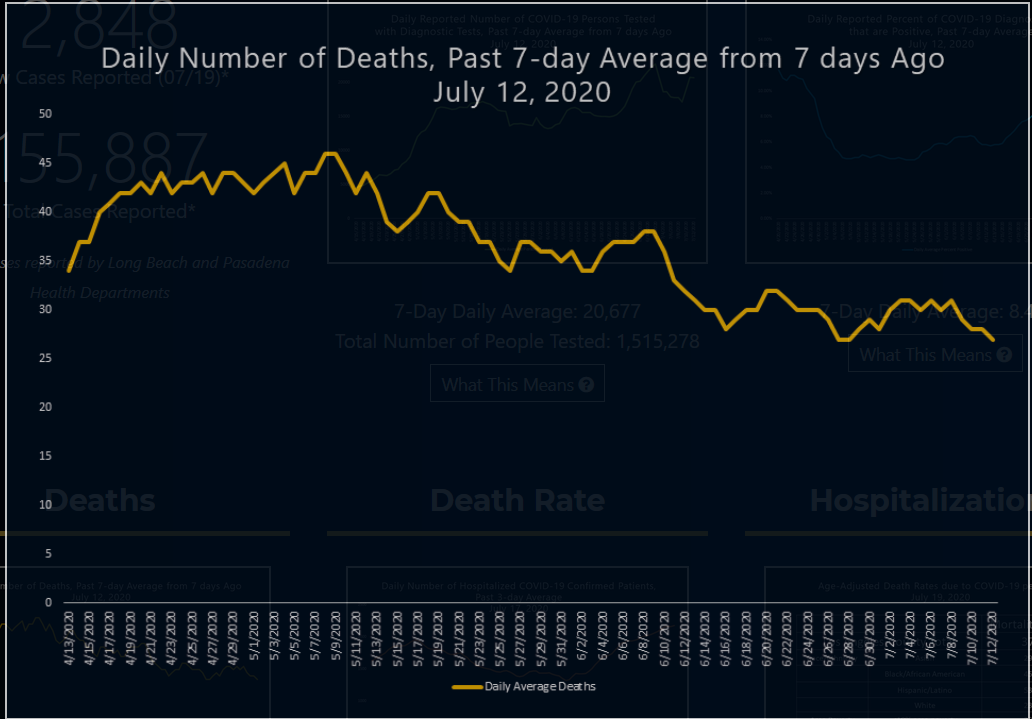 Orange County rolling over as well. Also has much better dashboard. 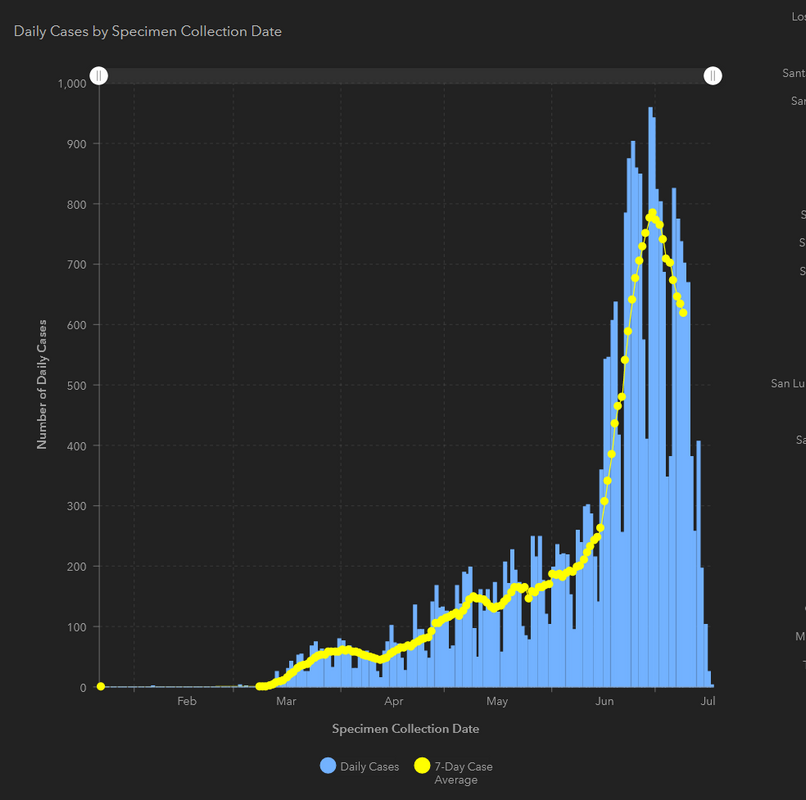 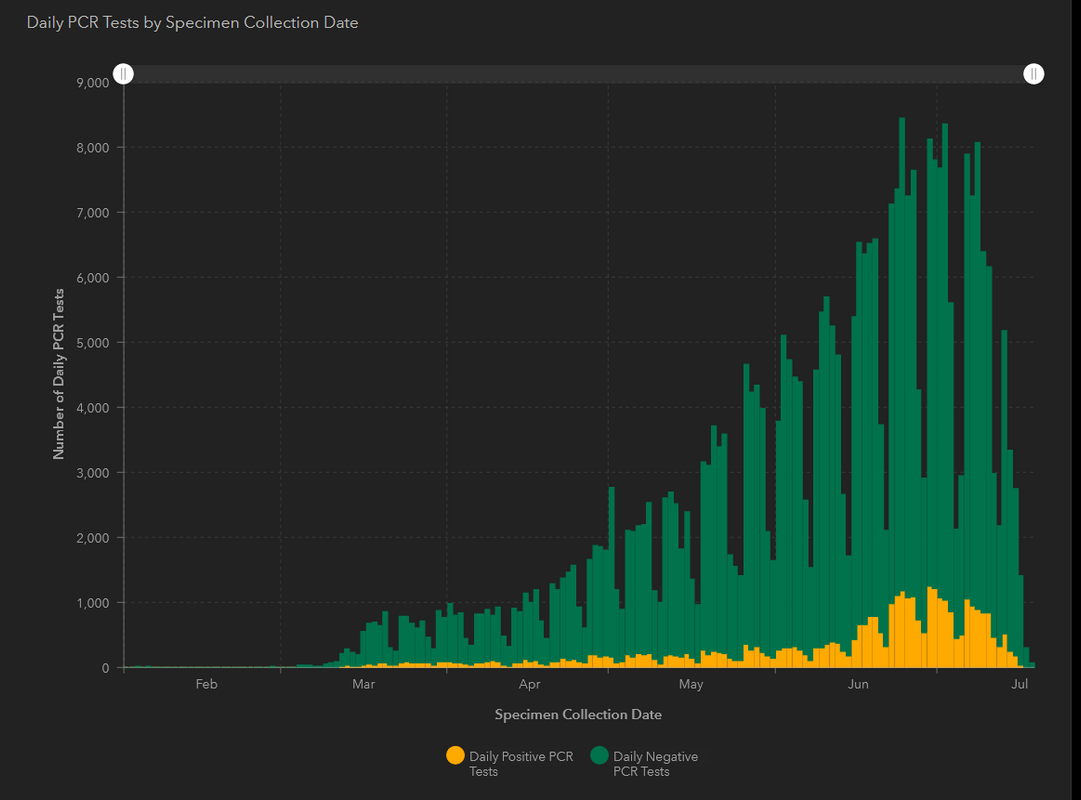 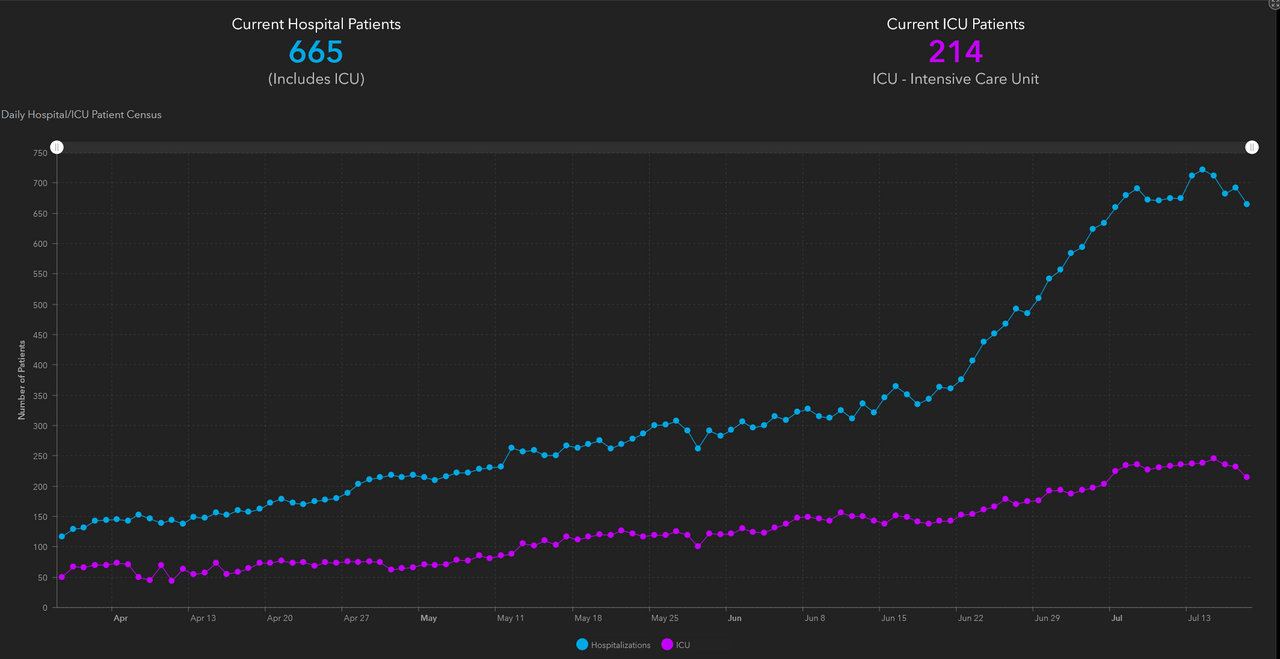 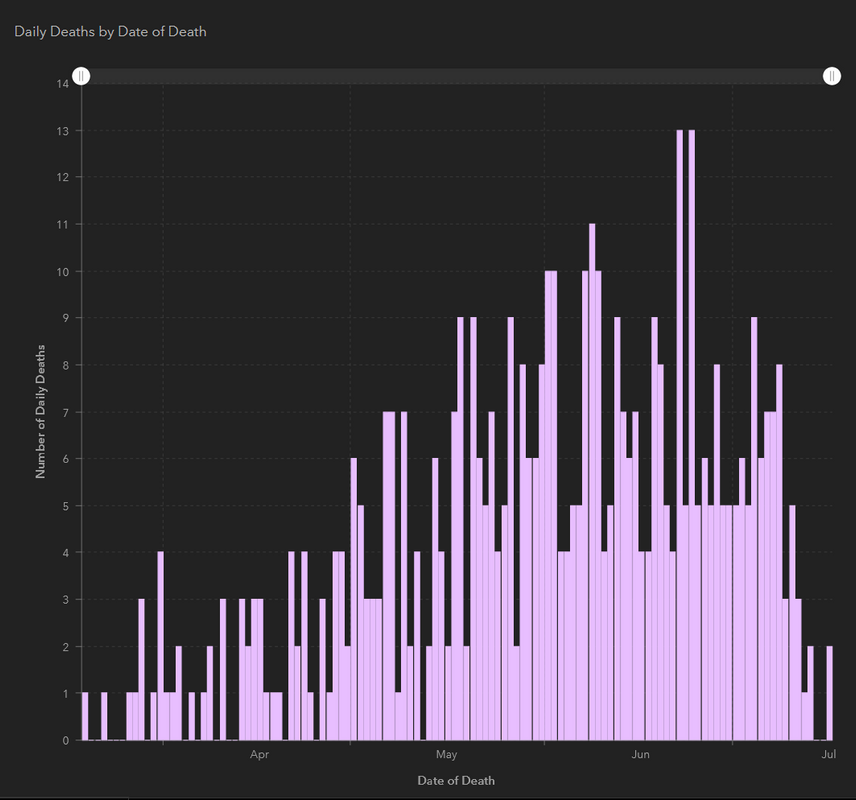 San Diego also starting to rollover, combined with the other 2 counties accounts over 40% of CA population.

Just at the edge of the Epi window, but it going to roll over...top is already in the past. In a few more weeks, on its way to the Swedish finish... 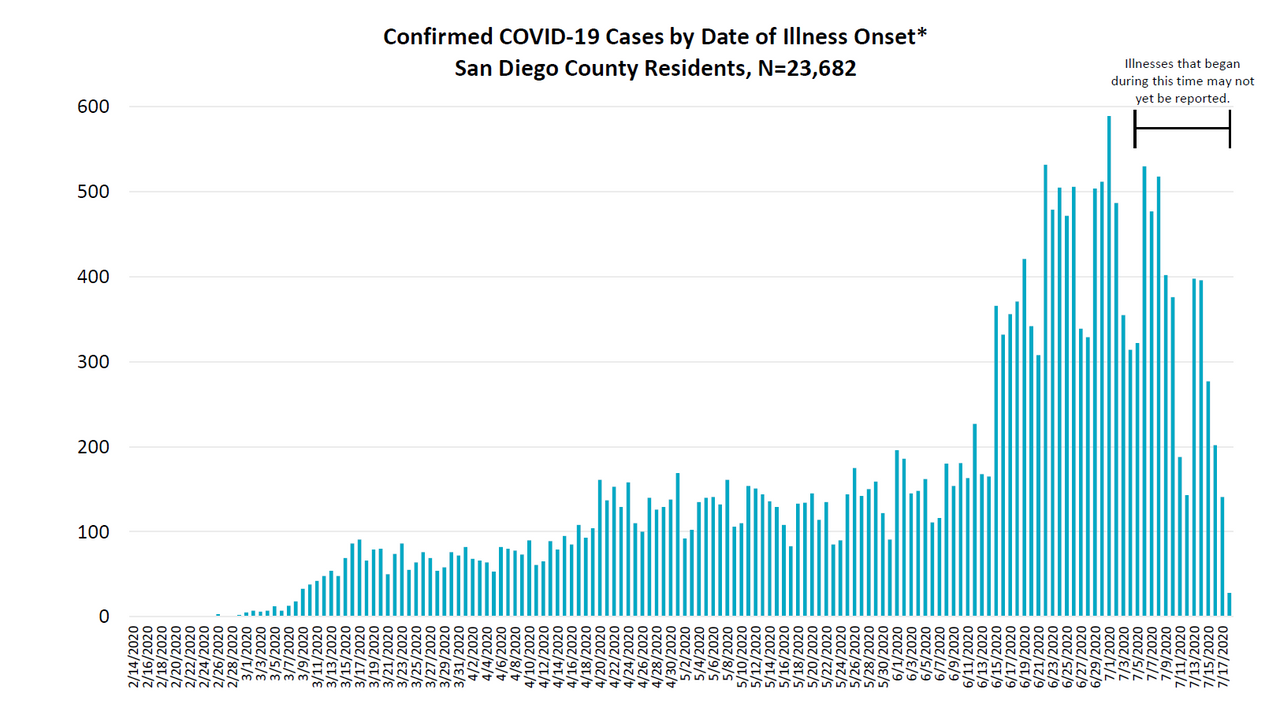 Next to Florida where the 7 day case MA is just starting to rollover, but the underlying drivers have fallen more. 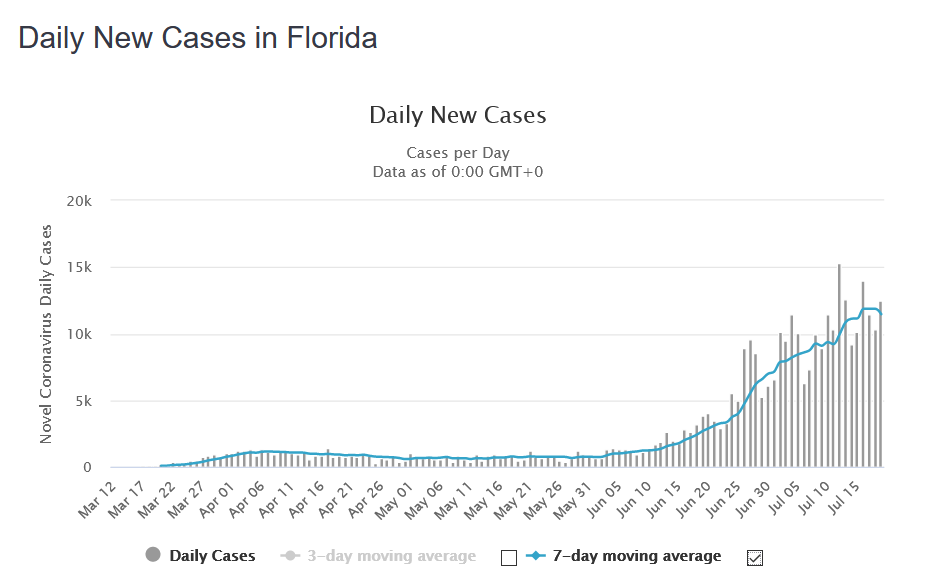 Dade County - roughly 12% of Fl population, and 7th largest county in the USA. As you can see, the underlying drivers have rolled over nicely.

And Floida as a whole looks pretty much the same.

Those 4 states account for the vast majority of populations centers that still have significant cases, and as they finish out, as they are on their way to doing now, the USA as a whole will follow.

Deaths per 10000 USA ranks worst of all world countries, and getting worse

News also, says it is  worse every day, catastrophe country.

Sweden and all other countries had a centralized country plan, USA 52 plans. Nothing  from top.

Even Bahamas is  banning USA citizens, from coming to their country.

Half of Nobel prize winners since 1950 from USA, and USA is richest country in the world, makes it amazing dilemma we are in.

Someone needs to take their meds.....

FANTASTIC set of charts k wave! Those are ACTUAL DATA versus OPINIONS by experts and scientists who are wrong more often than right. Thank you for all the work posting these charts. Saved me lot of leg work. Was very busy today locking in profits in long holdings from March-April. Now only 50% long versus 100% long from April.

My thanks to all the panic sellers in March. It was the best entry point to go long in a decade.

KWave, thanks for pulling all of that together.  Infinitely better than MSM.  Please keep us updated.

Thank you for sharing this data k wave.

it looks very encouraging. UK deaths are also falling. I welcome ending lockdown with common sense regulations. However, the inconsistency of when and where not to wear masks, what type of activity is safe or not safe etc confuses and already confused public.


I'm not sure what my future holds... But I know who holds it.
Back to Fearless Forecasters