6 replies to this topic

Gold: competition with bitcoin heating up

With investor confidence running high at the moment, there isn't much demand for defensive havens," said Colin Cieszynski, chief market strategist at SIA Wealth Management. "On top of this, traders seeking an alternative to the U.S. Dollar appear to be more focused on Bitcoin and other cryptocurrencies rather than precious metals."

This week, 14 Wall Street analysts participated in the survey. A total of 10 voters, or 71%, called for gold prices to fall next week

If gold price can't hold $1,800, major selloff could be next 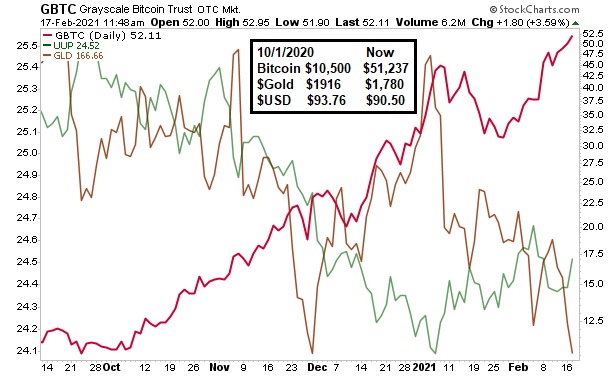 I have to wonder when everybody I run into is talking about bitcoin.  Reminds me of when everybody was mortgaging their house and buying CSCO in 2000 and 2001.  It did not end well for them.

We may get a pullback here, but this rally has legs.... BTC to the moon!

Yes that's a crypto coin!  How about some BaconSwap to go with it?

With each major announcement like the one BNY Mellon made, other institutions are spurred to more rapid adoption and deployment of digital assets. Tesla’s recent announcement will embolden other large corporates and institutions to accept crypto.

This would have all been great granted bitcoin decided to remain where it was. However, following the spike, the currency decided to take a nosedive south, suggesting that perhaps the rise was nothing but a simple product of temporary hype.

Some of the reasoning behind bitcoin’s sudden fall may have to do with the Chinese Lunar New Year, which has seemingly led to minor drops in the past.

There’s this unadulterated wave of big players [buying] that has continued to push the price higher. We might be seeing one or two big funds just cashing out. The big question is, ‘OK, you want to buy the pullback, but how big is the pullback that we are talking about?’

If gold price can't hold $1,800, major selloff could be next

Who was the Elliot wave guy who introduced me to the expression, "Technical vs Tactical" breakdown?

He passed away years ago but I liked his charts.