IT'S MAY, sell and go away!

When I look at the S&P chart for the last year (hit the link to my blog below), we are right at the top of the channel we've been in for the year.  We've had very good earnings, but we're not pushing up.  The market is richly valued on a PE basis, whether forward or trailing.  You see hints of inflation, who knows if it will be temporary?  If the market does not push up on good news during earnings season, what is going to happen when earnings season ends in a couple of weeks?  Makes me cautious.  Generally, I don't believe in "sell in May", this is about valuation, earnings and market action right now.

My swing trades typically last a couple of weeks to a couple of months and I focus on SPY.  During the Corona virus bear market I use more sector funds to avoid the bad spots in the SPY such as energy, hotels, and the airlines.

It very well could be. In my Daily Market Report (DMR) to EarningsBeats.com members on Thursday, I discussed this very possibility. I do not believe we're at any MAJOR top, but our major indices have had a significant "pre-earnings" run higher since late March and could be poised for a period of rest. Here are the five biggest warning signs I'm seeing right now.

Overbought can remain overbought for lengthy periods, so this by itself would not make me particularly nervous. But it's definitely worth noting that the S&P 500's weekly RSI closed this week above 71. Here's the current 5-year weekly chart of the $SPX: 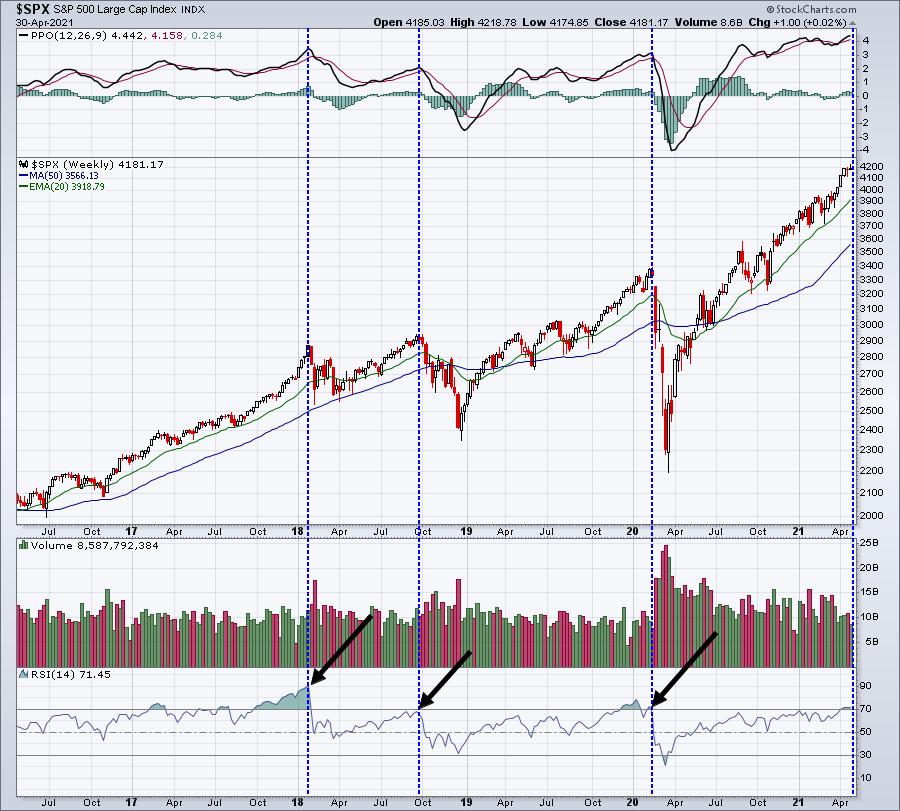 You can see that we've been overbought like this (or more) several times over the past 5 years. All of our significant tops occurred with weekly RSI readings at or above 70 (blue-dotted vertical lines). But, we've reached RSI 70 plenty of times in the past with little or no selling as a result. So while we're clearly overbought and "could" see a top, there's definitely no guarantee.

After the bell on Wednesday, Apple (AAPL) and Facebook (FB) both reported blowout quarterly results, which led to a very strong NASDAQ open on Thursday. Sellers, however, haven't let up since that open. Here are two charts of the NASDAQ, the first a daily chart showing the price resistance and then an intraday chart showing the selling since Thursday's open: 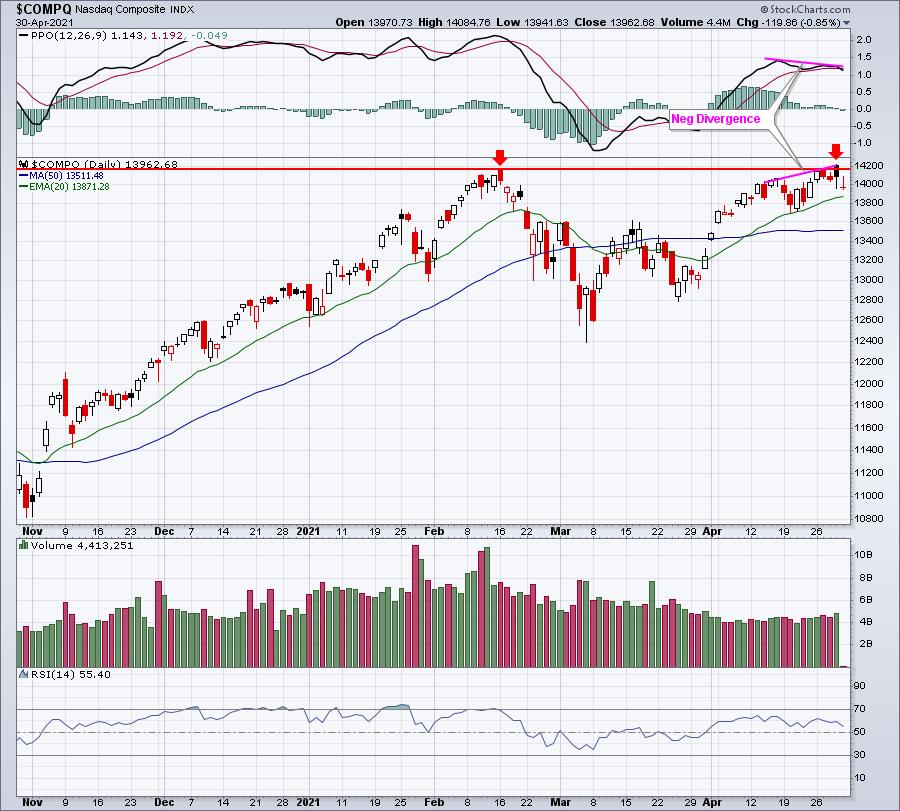 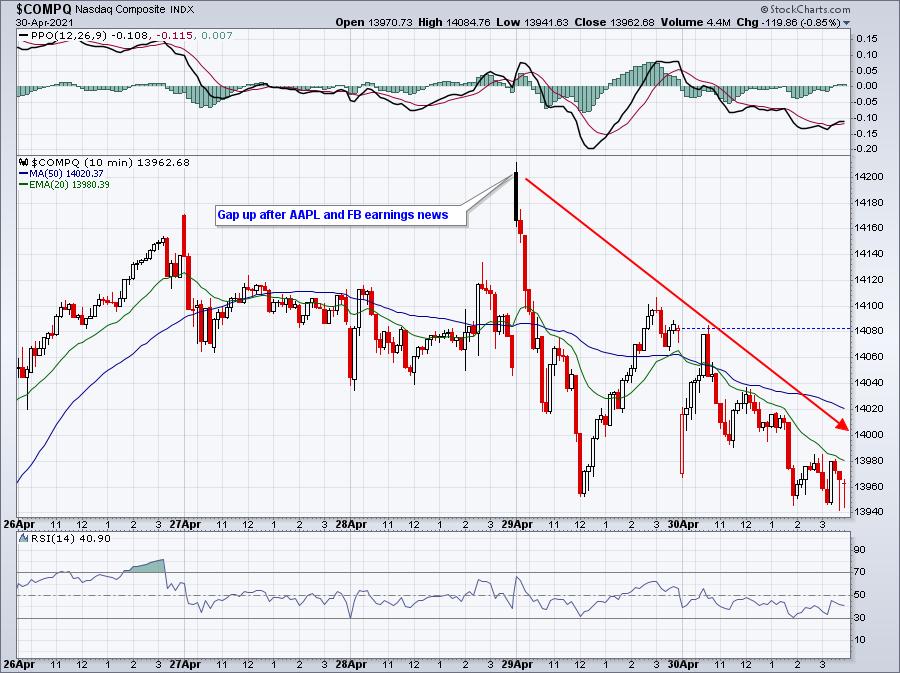 Eventually, a move back through 14,204.51 (Thursday's open) will be very bullish, but have we topped short-term? I'd say yes until proven wrong, which would include that breakout.

I wrote about the significance of rising stock prices accompanied by rising volatility ($VIX) back on September 3rd, just as the stock market topped. We're not quite where we were then, but we're getting close. The S&P 500 and VIX usually move opposite one another, but when that changes, we need to be aware of it. Check this out: 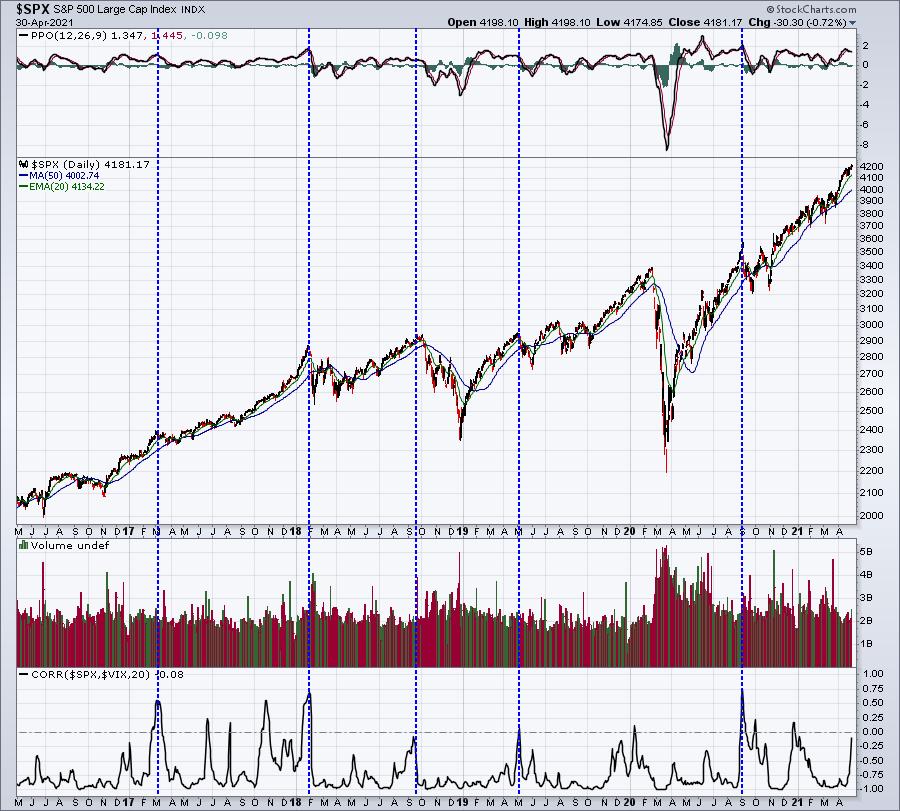 Haven't seen this signal before.   This signal helps you spot a bear market like a pro

The percentage of members above the 50-Day moving average risk-off model identifies instances when a low number of Index members are trading above their respective 50-day average as the Index itself hovers near a high. The model will issue two separate alerts based upon the following conditions.

Dean calculated performance statistics in the chart as a short signal, whereas annualized returns result from buying the S&P 500. Through the spring of 2021, this signal successfully shorted the S&P 63% of the time when holding for 17 trading days. 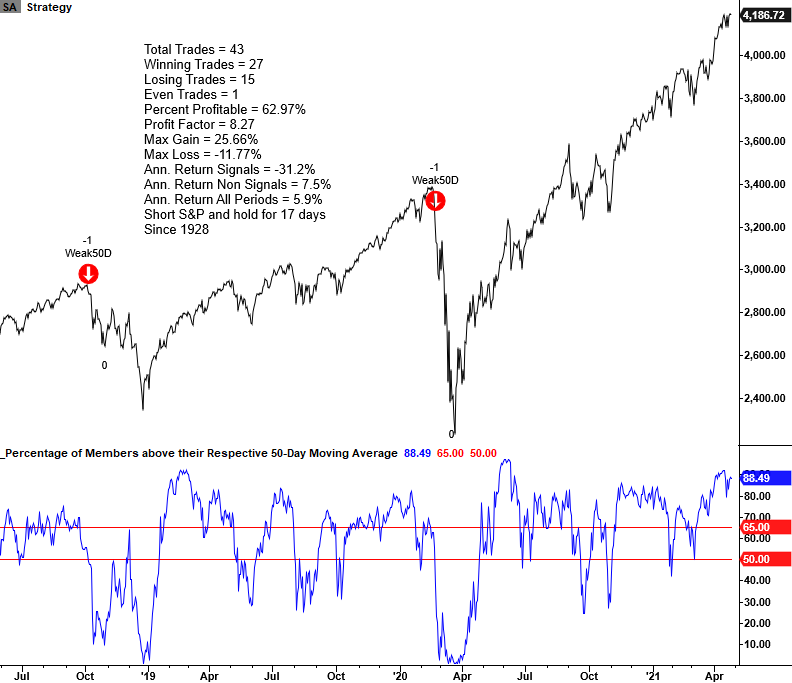 Using the percentage of members above the 50-day average has triggered ahead of several major market peaks. It wasn't perfect (nothing is), but it's a simple system, with readily available data, and triggered before 7 out of the last 10 major declines.

Year 2020 was most unusual due arrival of extremely contagious brand new virus from China.

Exclude year 2020 with seasonality behavior due to the turmoil caused by covid-19.

I closed all futes for now in premarket. 10am PMI, lets see if good news is still good news, or they get spooked about a market too hot. (JMHO)

Guess I should have held that long over the weekend but that's ok got my extreme fills overnight while I slept, average short now 4191.  I like the comments about strong earnings and the Nasdaq closing down on the week as this move still needs to take a break.  Although the overall market p/e ratio is only sitting around 45 lol, at the least I think volatility will kick up again and any day we could wake up to a -5% decline because of it.  In the back of my mind I keep thinking about Cat that now has a p/e ratio of 37.  When did that happen or should I say when did that become normal because it isn't as far as I remember!  Do think May is going to be an interesting one especially after April seeing a +5% return anyhow with extreme sentiment in options and overboughtness.  We're either gonna continue this move to a +50% move for the year or settle down and see some volatility this month.  Think that'll be the case.

Had to add couldn't resist the pop at the end here, average short 4194!