(You youngins may need to do some research:

See (TO DREAM THE IMPOSSIBLE DREAM) 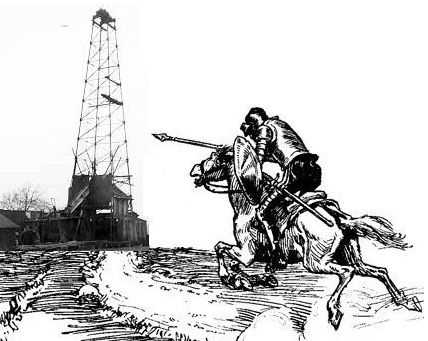 That is just pure propaganda.  What happened, for anyone watching, was the oil price war between Russia and Saudi last year, due to demand reduction due to Covid.  Fracked wells in the Bakken shale in ND don't last as long as salt dome wells in the Gulf of Mexico, so you have to drill and frack more frequently in ND.  That stopped in ND last year, not because of anything Trump or Biden did, it stopped because the price of oil fell due to decline in demand.  It was due to market force.  Now the market force has reversed, demand is picking up, and drilling will resume in the Bakken shale and around the world.

March 26, 2020 - On March 5, Russia rebuffed a Saudi move to reach an agreement on production cuts. Two days later, the Saudis turned around and announced they were going to flood the market with oil, launching a price war against Moscow. Russia responded in kind, promising more production. A barrel of West Texas Intermediate was trading at just under $60. This week it was at about $24, up a couple of dollars from the week before.

The companies at work in the Bakken region were quick to start cutting their budgets for new wells and rigs. Hess, which runs six of the 56 rigs in North Dakota, announced that it is taking five of them out of production. A local firm that hauls salt water for fracking, MBI Energy Services, informed Hickel’s office that it was laying off more than 200 workers. (The company did not respond to requests for comment.)

“The bottom has just dropped out,” North Dakota’s mineral resources director, Lynn Helms, said at a news briefing last week. “It’s just impossible to predict at this point how long this price war is going to go on.”

His agency is working on new rules that would allow oil companies to keep wells on an inactive basis for longer than is currently permitted.

“I think the commission needs to send a signal to the industry and to the markets that it doesn’t make good business sense to force North Dakota Bakken crude oil into a market that’s already priced well below break-evens and below really what long-term world demand says the market should be at,” he said. “We’re going to look at 50 or 60 percent retraction [in cash flow].”

That’s not good news for the state budget, which derives more than half its income from production and extraction taxes.

Sen. Kevin Cramer (R-N.D.) has asked President Trump to impose an embargo on crude oil from Russia, Saudi Arabia and other OPEC nations. “We must send the immediate signal; the United States will not be bullied or taken for granted,” he wrote last week.

Most of the oil producers in the Bakken region have hedged a significant portion of their 2020 sales, typically at $50 or $55 a barrel, Patten says. That will defer some of the pain until next year. But with investors having turned their backs on oil, lower cash flow means less money for future drilling.

A typical well costs about $4 million to drill and about another $4 million to frack, Patten says. Last summer, when oil was at $76, a company could recover its money in 10 to 14 months. “That’s what allows them to drill another well.”

Now, with oil at less than a third of that price, it could take more than three years to have the cash to start another one. (The actual cost of pumping is about $10 a barrel, so even at a sales price of $20, there’s still some cash flow.) This means fewer jobs in a sector that accounts for 9 percent of North Dakota’s employment.

There is plenty of producible oil in the Bakken shale that was the industry stopped developing, due to the drop in demand.  The demand is back, and we know where to drill and frack.  It does not happen overnight, it takes about six months to bring on a new fracked well.  I am confident the production will come back, and the oil situation will stabilize.

My swing trades typically last a couple of weeks to a couple of months and I focus on SPY.  During the Corona virus bear market I use more sector funds to avoid the bad spots in the SPY such as energy, hotels, and the airlines.

That is just pure propaganda.

If you’re going to use WaPo as a determining resource, they certainly fit the bill.

You might want to consider doing your own due diligence instead of relying on biased, yellow journalism.