BEAR MARKET rally that will soon reverse to retest 2022 LOWs

But, it may not if there is quick end to the UKRAINE situation, energy prices drop, China COVID surge dissipates, and supply chain issues are less painful on the global economy.

Good end to a hectic with profits on Thursday & Friday, small net weekly profit,  and holding LARGE LONG positions in LONG TERM & RISK Portfolios. However, I decided to hedge as much as possible, so much so that HEDGE SHORT profits were only smaller than the record weekly NQ daytrading profits. UVXY PUTS &  TLT CALLS profits also helped.

If and when that breaks, then could be trouble, and not just for BTC...32K looks possible, then we see...

When prices go down, people turn more bearish.  It is a natural human phenomenon, and it is still working during the current price decline.  The useful aspect of this is that when you see an extreme reading for a sentiment indicator, it is a sign that a bottom is at hand for prices.

This week’s survey data from the folks at Investors Intelligence showed a big jump in the percentage of investment advisors and newsletter writers they track who are being tallied as bearish, up to 40.8% now.  This is pretty rarified territory, only seen 3 other times in the past decade.  Each of those were associated with pretty important price lows.

It has been bigger than this before.  At the scariest point of the 2008 decline, the week of Oct. 3, 2008, it got all the way up to 53%.  And in December 1994 it got all the way up to 59%.  So it is possible to get this group to a greater bearish state than this, but it has been a long time since they have done that.  It is worth noting that between then and now a lot of the old analysts have been replaced to some extent by a new group.  So no such survey is ever exactly the same, just as you can never step in the same river twice.

A similarly extreme sentiment reading comes from the NAAIM Exposure Index, which this week got down to 24.

This indicator reflects the average stock market exposure each week among the members of the National Association of Active Investment Managers (NAAIM).  Their individual responses can range from -200 for leveraged short, to 0 for neutral, and up to +200 for leveraged long.  Those responses are then averaged together to get the NAAIM Exposure Index.  Even though these survey respondents are professional money managers, they still fall victim to the same moods and fears as everyone else.

The NAAIM Exposure Index went a little bit lower than this at the bottom of the Covid Crash in March 2020.  Other than that, we have to reach all the way back to the twin price bottoms in September 2015 and February 2016, when investors got fearful in the illiquid period following the end of QE3.

In other words, the current sentiment condition in these indicators is in the same range as what was seen at some really meaningful price bottoms.  A sentiment reading is a condition, and not a “signal”, and the one thing such a reading will not tell you is when it is going to finally matter.  They all usually do, eventually, but it can be frustrating to wait for that moment to appear.

"When the CPCE dropped in mid-2014 below 0.40, the S&P 500 struggled for the next year before finally topping in May 2015. Note that the CPCE barely dropped beneath 0.48 at the time of that top. ONE DAY'S .48 reading!!! Now look at that cluster of readings for the past two years at an unusually low level. Sentiment had NEVER reached this extreme bullish level before and probably never will again. We needed to "reset" sentiment before the stock market had a chance of further appreciation. So now scroll back up and look at that 253-day moving average of the CPCE that was just beginning to turn higher at the start of 2022. Want to know where it is today? Check this out: 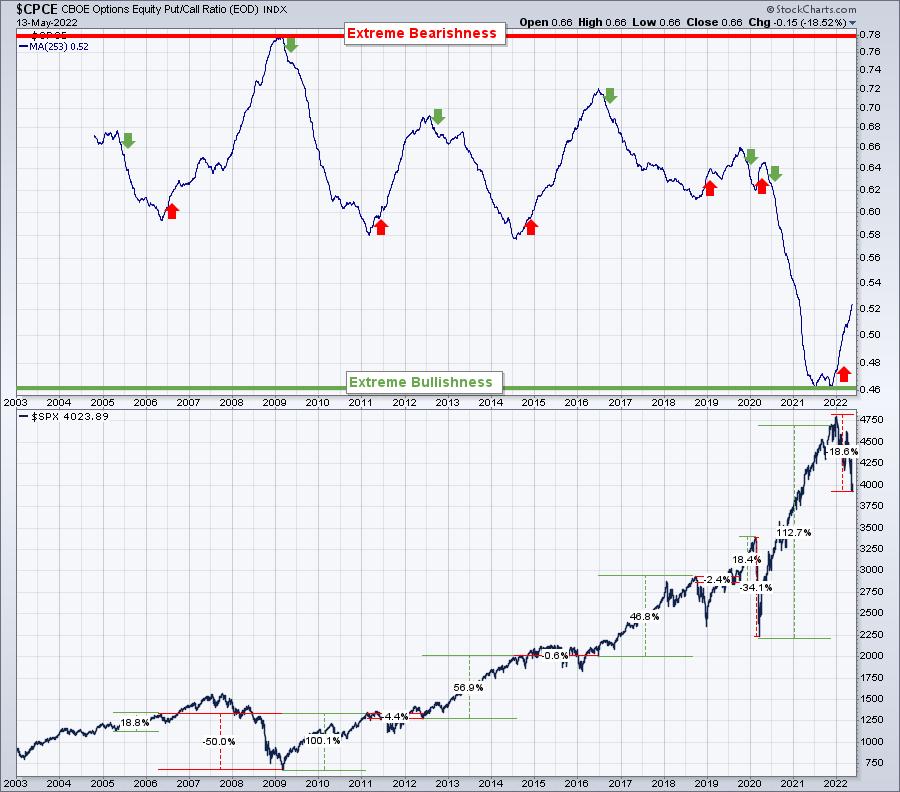 The U.S. stock market historically struggles as sentiment is resetting higher. And sentiment was our biggest challenge as we opened 2022, not inflation, not interest rates, not the war, not the Fed. Those were the reasons the media focused on to enable sentiment to reset....

I don't know that we've bottomed, but I do believe we're getting very close. I said in our MarketVision 2022 event that the key to being successful in 2022 was going to be our ability to exercise PATIENCE. That's what I've done. I've traded, but mostly remained in cash. My goal is to be ready with MORE buying power when we ultimately bottom.,,"

DULL market tonight, 4 trades, not keen to trade this, but of Intra bar range rises then yes.... Still think we see ES 4050 or higher tonight

Yup, either one more sharp leg down, or we are already done...

As long as the ponzi speculation indicator BTC above 30K, bulls might avoid a crash wave over the edge...that was huge stick save there over the weekend and if bulls can hang for another day or 2, storm may have passed for now....

But should BTC fail before it gets much higher, the next wave down could be horrific....

If a final break is coming, I would expect to see signs of it fairly soon...a close back under 30k by the end of Monday for instance would likely be No Bueno.