9 replies to this topic

According to my risk summation system, the day this coming week with the highest risk of a turn in or acceleration of the current trend in the DJIA is Wednesday September 21st.  Also, there is a small cluster of risk turns on Monday and Tuesday not quite sufficient to justify a risk window label, but large enough to maybe enable some sort of half-hearted bargain hunting bounce up early this coming week going into the large risk window on Wednesday.

This past week the Monday-Tuesday 12th-13th risk window tagged what appears to be an important top.  The Thursday risk window at first glance would appear to have been a dud, but it did catch the "top" of what may have been a failed correction in the middle of a large down trend depending on the action early this coming week. 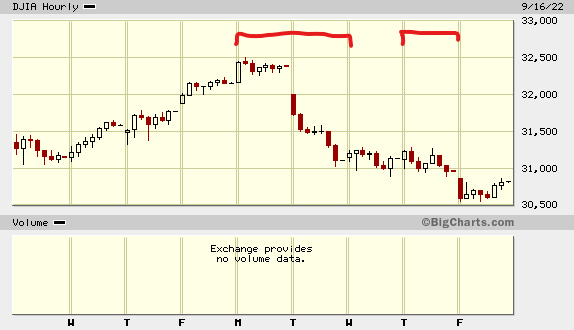 My catching a falling knife Cable purchase worked out just as you would expect, with me getting stabbed.  At least the Pound ended the week slightly above my entry point.  The BOE meets this coming Thursday the day after the Fed and may help put a floor under the currency if they do and say the right things.  Also, the Fed could help out if they don't do and don't say the right things this coming Wednesday, so I've got two shots at salvation unfortunately meted out by rather untrustworthy sources.

Speaking of the Fed, you really have to watch what they do instead of what they say.  Take a look at their balance sheet below which is updated through this past Tuesday the 13th.  Notice anything funny at the end in September when they are supposed to be reducing it by some 80 or 90 billion a month, it's rising!  They're increasing the balance sheet, obviously trying to pump up the stock market which is swooning.  I wish they would just admit that there's now three Fed mandates: full employment, 2% inflation and a rising stock market.   Of course, there are still a couple of weeks left in September for them to get back on track and sell instead of buy, but I suppose that depends on the S&P, what a circus. 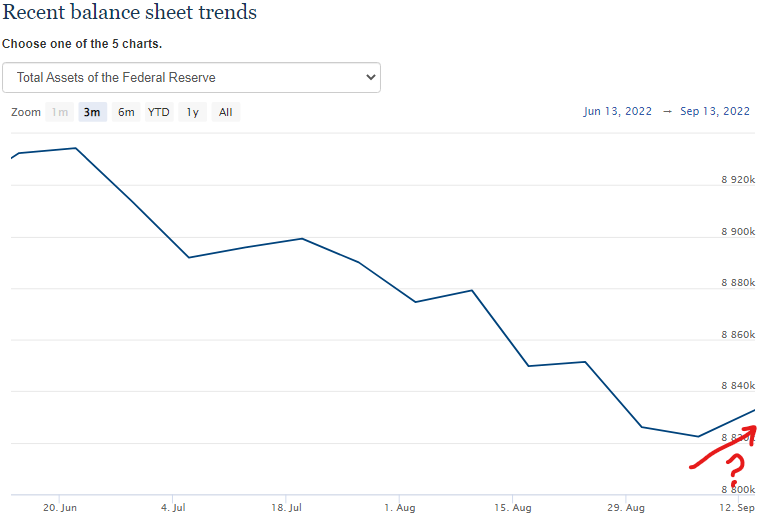 With the cotton-picking Fed pumping again as shown above, it's not clear at all if they will have the chutzpah to bump the Fed funds rate by a big figure this coming Wednesday.  A 0.5% bump will probably shoot this nascent bear right in the furry spot between its eyes. If they do drop the big one, my downside target (purple line) for completion of the current sell-off is shown below somewhere in the 27,000 DJIA neighborhood plus or minus a thousand or so DOW points between the 50% and 61.8% retracements.

As I mentioned last week, there is a low probability crash window stretching from this coming Wednesday September 21st through Monday September 26th.  A crash or a somewhat less dramatic large sell off would fit nicely with my short-term Elliott wave count which will be looking for a 3rd wave in a C wave in a three-part 5th wave down in that time window.

As I mentioned last week, there is a low probability crash window stretching from this coming Wednesday September 21st through Monday September 26th.  A crash or a somewhat less dramatic large sell off would fit nicely with my short-term Elliott wave count which will be looking for a 3rd wave in a C wave in a three-part 5th wave down in that time window.

Apple is about as perfectly setup for something like that as you are likely to see....

And also Value Line Geo just barely took out the right shoulder of the inverse H&S on Friday. Right shoulder breaches are notorious for leading to big fast moves...up or down.

Below that yellow line is potential crash like territory....

This is why I look at everything....folks who focus myopically on just one index very often miss very important clues being given....

And you want to see something that will perhaps blow your mind?

The Geo, where bigger companies matter more than the Arithmetic, has gone almost nowhere sine 1998.

In my view, that huge drop in 2020 was not really "supposed" to happen, and is why it reversed back up so quickly.

So if we take that out, we are perhaps looking at the 40 year cycle Breakout/fakeout turn here...

In my view, folks are radically underestimating the 40 year cycle turn in interest rates coming effects....

K Wave, thank you for reminding me that I do tend to spend a bit too much time looking at the DJIA since it's what my systems are geared too.  It's been forever since I've downloaded a Value Line Geometric plot, and glad I did, that 450 line is pretty amazing hitting two important pivot areas and sitting right at the 61.8% retracement.  I will be amazed if that level is not "respected" when the index approaches it at the purple trend line.  I did a quick search on duckduckgo and couldn't find an ETF based on the Value Line Geometric Index.  If anyone reading this knows one, please post its symbol in response.  Thanks for the education in advance.

K Wave, you are also right about that 40 year long bond bull market probably being toast as seen in the www.macrotrends.net plot below.  The long trendline break, green or red, is clearly important and portends higher rates in the coming years as the piper surely will have to be paid for all the funny money printing.  What is equally amazing about the current sub-4% T-Bond yield is that it is less than half the current inflation rate. 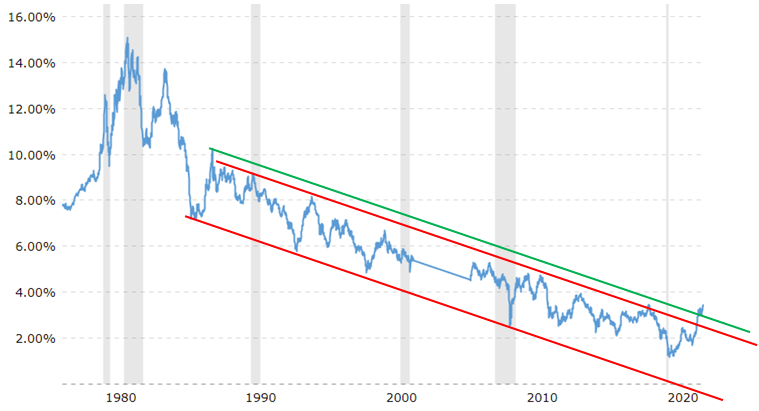 He said: "Go away in late August, September and October!"

I keep being amazed at seeing a replay of past cycle sell-offs in the $NYA.

For example, as previously, we touched the monthly 50 MA (Blue Line on chart) and bounced back up... only to turn down again.

It's quite a way down from here.

Could the November elections trigger something similar?

My guess is as good as what you paid for it! 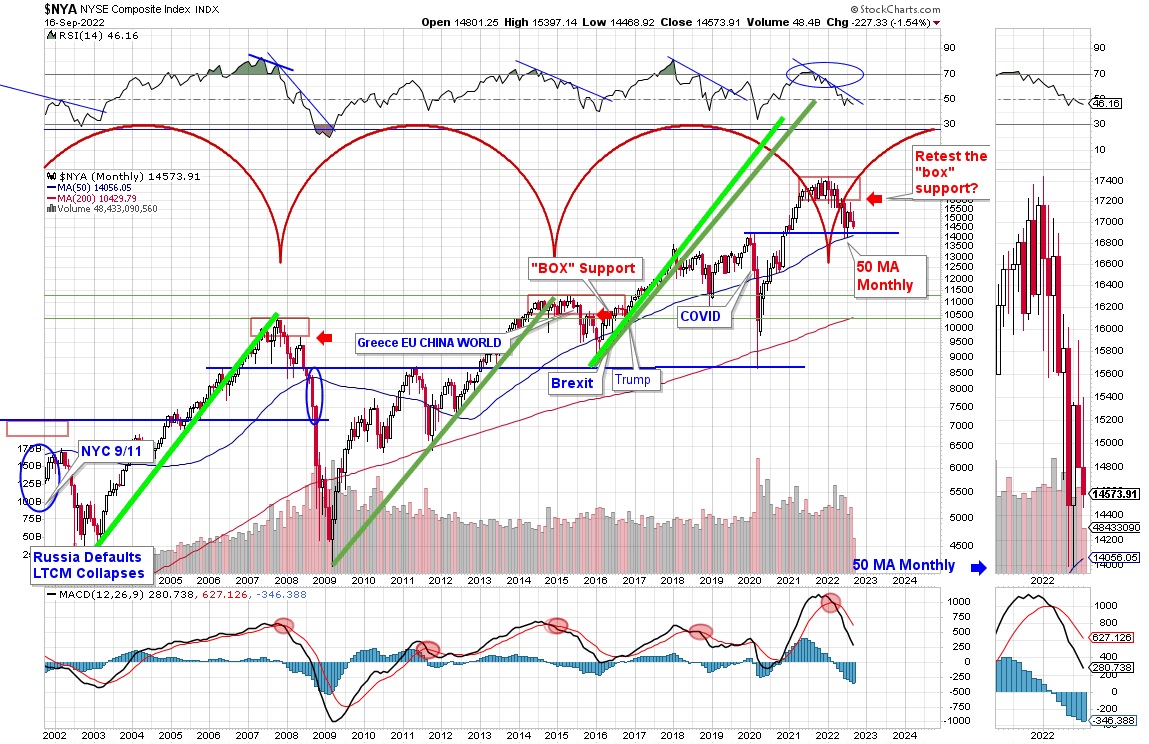 One of the canaries in this bubble market coal mine has to be Tesla, a car maker trading at 109 times earnings while Ford trades at 5 times earnings.  During this bear market I propose that the laws of gravity will eventually prevail and this Icarus whose rockets flew too near the sun will come plummeting back to earth.  The plot below shows potential terra firma targets for the stock at something near 175, or slightly more bearish at 150 or even more pessimistically at 75 based on a Fib retracement structure from a gap that hits recent lows quite well and trend lines at the slope of recent sell-offs.

Yes, once Tesla does finally roll over, it should be a big relentless drop.

I believe it finally rolling over is the key to unleashing the Kraken for a big fast September to October drop.

I am stalking it right now trying to time the entry for a big put play.

But chart has not given the signal just yet... although that may come as soon as Monday.

If, on the off chance it shoots out to the upside, then that would be a warning that perhaps that big drop into October may not be coming.

I think it is coming, and I think Tesla joins in very soon.