According to my risk window summation system, the days this coming week or so with the highest risk of a turn in or acceleration of the current trend are Tuesday January 3rd possibly stretching into Wednesday morning and Monday January 9th.

Last week I noted that pretty much the whole week was a risk window and true to form every day last week a low or high formed.  None all that notable, but turns never the less.  Monday the 3rd's action will determine if the highest risk window sum day last week, Friday the 30th, will turn out to be an important turn up. 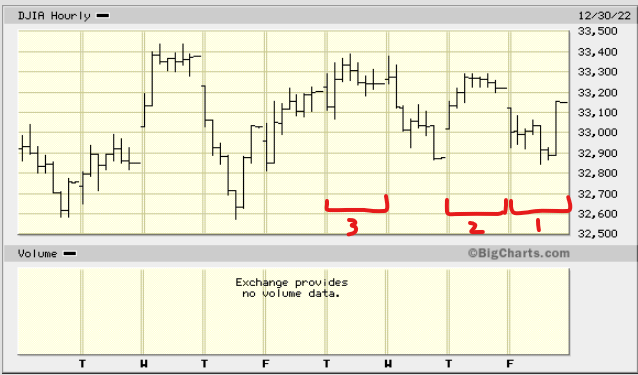 Well, it looks like this year Santa flew Southwest Airlines to Manhattan.  Maybe he'll just be late like everybody else that used them over the holidays and show up this coming Tuesday with presents for all the kiddies on Wall Street.  If I'm not mistaken, Yale Hirsh did include the first few days of the new year in the fine print of his adage about Santa not calling on Wall Street, so there is still time for good tidings.

Unless Santa is a no show tomorrow and the DJIA heads south instead of north-pole-ward, my alternate "b" wave count is starting to look more likely now that the parallel green trend line that I noted in a post last week has been broken.  This alternate assumes that the "b" wave down in a three part move upward is complete and a "c" wave up to complete the "B" wave is about to begin possibly reaching the old highs in the DJIA.  This count probably depends on continued good inflation numbers and Powell doing an Arthur Burns imitation at the  February 1st presser, which, despite his Volker rantings, is his wont. 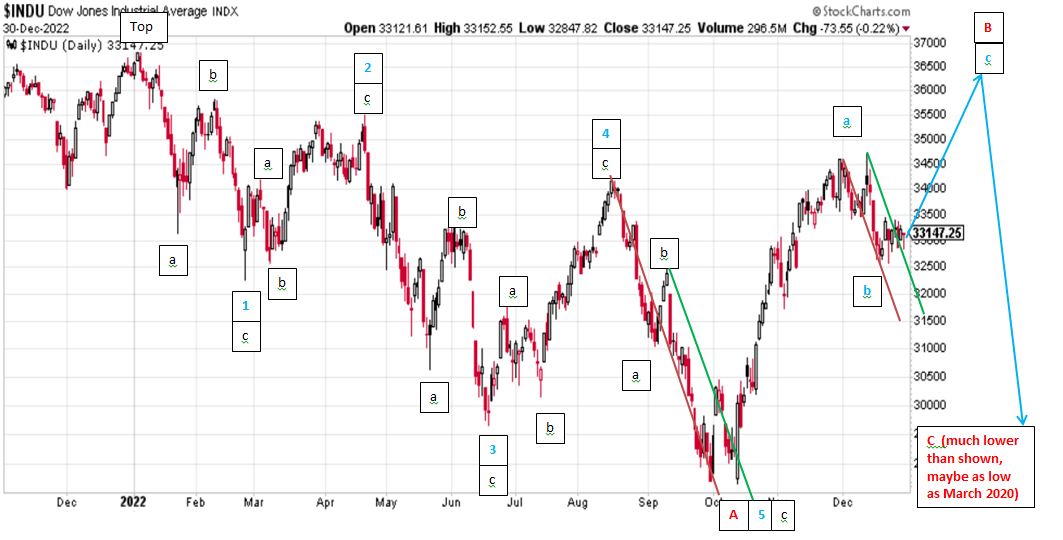 Did Santa Take LUV to Manhattan?

Santa made it just fine...but LUV lost his luggage!

LUV says they will make it up tonight in Times Square.

But I bet they will just "drop the ball" again.

At least investors in Southwest Airlines aren't doing as badly as investors in the UK equivalent company, EasyJet, whose stock is just about back to where it was at the very bottom of the financial crisis in 2009.  Both are doing much worse than the S&P.  As my old grandad used to say, if it flies or floats, don't buy it, just rent it. 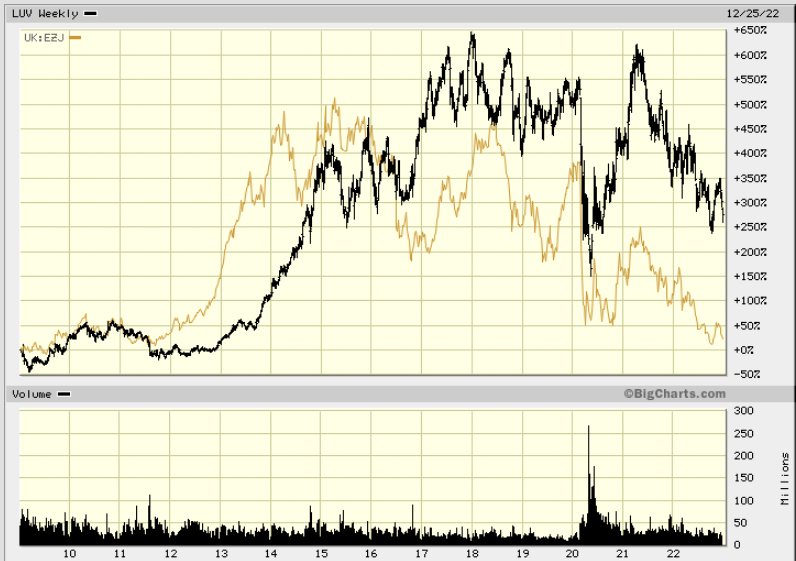 T-minus 1 hour and 15 minutes until this crappy year is no more!

A fool and his money... (the second mousie gets the cheese)

My gut tells me we start Tuesday with a rally.

Anything can happen...what's happening now?
No one can forecast the future. No one.
All stocks (ETF's) are BAD...unless they go up - William O'Neil
When The Time Comes To Buy or Sell, You Won't Want To - Walter Deemer
Back to Fearless Forecasters