12 replies to this topic

BluStar Market Insights
January 23, 2023
Today's rally looks like the last gasp of the Tech Rally and the Cryptos. The former generals, the DJI and NYSE Indexes, are both failing miserably! This is NOT a good sign, as we now have multi-divergent highs being formed here!
The key, of course, is the upcoming FED meeting. We are running an approximate 4.5 month cycle, suggesting a strong impulse low on Feb 3 and an irregular low on the next 16 TD low due Feb 10 down into the 3500's, maybe even the 3400's on the S&P 500.
We see this as a perfect set up for the "w-x-y" B Wave into early March and then the inevitable "a-b-c" C Wave crash from March into early/mid April.
Uranus is now Direct and late Feb 3 sees the Sun sq. Uranus and Venus sq. Mars on the 4th. I believe it to be wishful thinking on those holdovers of the past who think the bear is done, and they are throwing everything at this. This, in our opinion, is the classic sucker's play!

My bet on the short side was initially good. My problem often repeated is taking too large a position. Because of the size I'll likely exit very soon. Extremely distressing health situation doesn't help. Believe me, I pray. Always do.

Anyway Brad, can you at least admit you were wrong? so many collapse predictions by such a date. I still think it's a bear but it can go higher even more. UVIX 4.15

Yup, unless we start going over the cliff soon, this is potentially only a run of the mill touch and go off the 900 day area. Market has seen many of these over the last 100+ years.

As it stand right now, only The Naz is flashing bear signals, and it still an area where those could get cancelled.

But....if we start breaking down some time over the next week or so, we could see many other sectors start flashing bear signals as well.

Full on bears are not actually very common, but after the extreme Covid funny money bubble popped, I am not ruling out another one here just yet.

As an example of the above, here are last 2 episodes where market actually went bear mode.

Here a re a few examples of touch n go

They both went initially to the 900, but after the big bounce wave, Dow in 87 did not then take out the 900 on the way down like it did in 1930, and instead managed to get a foothold back above the 200 day. And THAT was the big difference.

Along those lines, here are the conflicting signals we have right now....eventually they will get back in sync....which way, is the question.

Dow appears to have at least a foothold over the 200, while Naz Comp appears to thinking real hard about full on bear mode.

I expect the "syncing up" likely begins during next few weeks....so beware of getting over committed to one direction or the other until then.

And SPX could easily go either way...but would likely have to start down pretty quickly.

kwave, 2023 does not look great for bulls in my 82 year old eyes. LT investors will lose more money to inflation than gain in market. 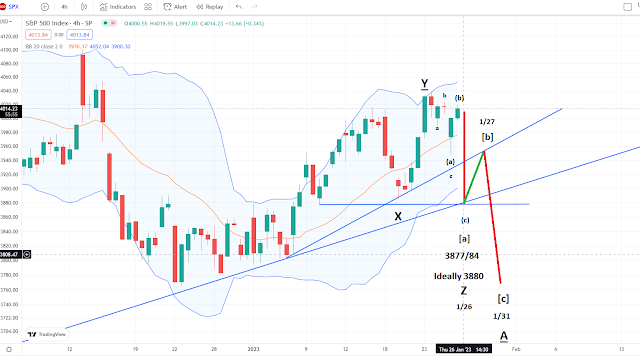 Also tagged with one or more of these keywords: SPX