"Nothing artificial in my body"

22 replies to this topic

The experimental vaccine more popular than all other vaccines combined in any one year.

I find it hilarious that people who make a fuss about GMO food are the first in line for experimental virus shots.

People are funnier than anybody.

More than 95% of animals used for meat and dairy in the United States eat GMO crops. Independent studies show that there is no difference in how GMO and non-GMO foods affect the health and safety of animals. The DNA in the GMO food does not transfer to the animal that eats it.

There is no evidence that a crop is dangerous to eat just because it is GMO.

Lady at steakhouse to waiter: "I'm Vegan. What do you recommend?"

Nothing scares me, not bacon every morning with breakfast, 8 oz rib-eys steak for dinner, 3 jabs of Moderna vaccine, an ocean cruise (just did one 3 weeks ago), GMO foods, or driving in Florida with all these very old drivers who can't see or hear very well.

What makes me so fearless? Doing this daily:

I used to hang our clothes on my treadmill.

The experimental vaccine more popular than all other vaccines combined in any one year.

You're not "fully vaccinated" if you need a "booster".

As to popularity, when people are threatened and bullied to get poked or lose their jobs, pay a fine, or even losing their ability to live their lives by restrictions, you're likely to get a desired result by those who seem to have an affinity of knowing what's best for you with very little data to support their views...just the fear of what might or could be.

And as far as experimental is concerned, if you choose to be a lab rat to genetic therapy, that is always your choice in the matter...exercise or not.

BTW...you may have missed my questions on your cruise from another thread, so I'll bring it up again since many may be interested: "which cruise line did you take? Did they still make you wear masks on board? Did they separate those without the appropriate paper work from those who provided their verification of being poked?"

Does anyone wonder why so many doctors and nurses are refusing the poke?

Members of the Association of American Physicians and Surgeons (AAPS) voted this week at their 57th Annual Meeting in St. Louis to pass a resolution calling for an end to mandatory childhood vaccines. The resolution passed without a single "no" vote.

Association of American Physicians and Surgeons, Inc.
A Voice for Private Physicians Since 1943

These Health Care Workers Would Rather Get Fired!

Of her 261 nurses and therapists, 56 have declined to get the vaccine.

Nurses Are In Short Supply. Employers Worry Vaccine Mandate Could Make It Worse

Biden has essentially told 17 million health care workers: Get vaccinated or get out. He has not offered them the testing option he's given workers in most other industries.

1,800 flights cancelled this past weekend. 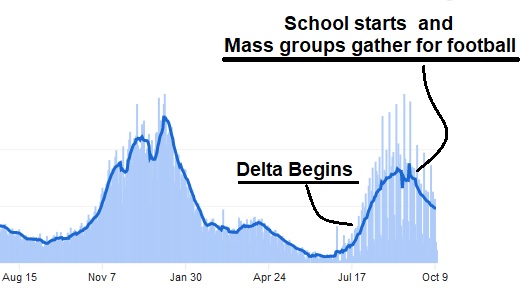 I find it fascinating that instead of chastising health care workers who don't take the poke, that people don't ask WHY they don't since they have been both exposed to the virus AND they have more than average knowledge about viruses and other germs since this is their livelihood.

In any event...this is just another prime example of manipulative propaganda...one day your in and embraced, the next day you're out and abandoned.

Oops someone messed up the top articles of the AAPS says its dated Nov. 2 2000 lol!!  Not thinking this is valid lol!!!