This is my thread for the next week or two or longer.... IMPORTANT TOPIC: Has the FED RECESSION begun in Q1 2022? and Can TECH recover during the next few weeks to save the market & economy?

1. In my opinion, the recession began in Q1 as evidenced by decline in Q1 GDP

2. TECH COMPANIES. TECH SECTOR, globally, face difficult times and will not recover until at least after end of Q2

3 of 3 wave down looks like to me,
buy the dip is going to turn into waterfall.

The best way for the FED to handle this CRISIS is:

-- let all know that there is no 50 bps or 75 bps baken-in .... will be evaluated and decided as situation demands

-- FED must reassure, reiterate, etc that the FED is willing to do what is necessary, to intervene, if financial system & markets (especially BOND) require intervention for stability

-- most likely, the FED will raise 50  bps again but the FED must convince market participants that there is no fixed or baked-in rate rise.

Crusty Ole Royalty Buyer
@RobertLBurns61
· 1h
Replying to @McClellanOsc
Tom, how do you see this playing out with the U.S. debt level being so high, at a time when the interest rate cycle is pointing up? Thanks.

BUFFET having a bad year in the markets?

Go with the flow, Buff, but adhere to the fundamentals of good trading! Worked in the dotcom bubble, all bubbles, and in this latest post-COVID premature-celebratory RALLY to SPX 4800!

Hate these damnn WINDOWS updates! Shelved them for as long as possible ... but got to do them, updates, reinstall, blah b;ah blah

Jeez, these BERKs guys are really pSSSED off!

Another tough week, and month, for the market. Ongoing concerns about inflation, earnings, and economic growth, continue to pressure stocks. As noted last week, there is a tremendous amount of damage in the market below the surface of the index. Nonetheless, indexes certainly got beat up last week.

As I noted last week,

“While the market is very oversold short-term, the break of the 50-dma suggests we could see a retest of the March lows next week. Such would be around 4150 on the S&P index.”

Such was indeed the case as markets tested lows on Tuesday. That sell-off led to a sharp rally on Thursday, only to retrace to lows on Friday. For the week, the market made little progress in either direction. It is also essential to keep some perspective at this juncture. Yes, the S&P is down roughly 12% year-to-date and is one of the roughest yearly starts since 1970. However, don’t forget the 26% gain in 2021.

As we have noted previously, the good news, if you want to call it that, is that investors are so bearish it’s bullish. The percentage of bullish investors is currently 16% and close to a record low, leaving the bull/bear spread at -43%, a level surpassed only twice in the past 35 years. Tom Lee of Fundstrat shows that the returns following such sentiment lows tend to be good.

Good one from CARL

CONCLUSION: The Silver Cross and Golden Cross Indexes are excellent indicators for assessing breadth and participation in the medium- and long-term. The broadest market indexes are showing that upside participation by their components is mighty thin. The situation is even worse for sector indexes. The S&P 500 is still slightly above 50% level, but just barely. More selling will surely send into the bear market zone.

Lots of warning in recent days:

This momentum signal suggests caution for stocks An increasing number of industries are struggling.

The number of sub-industry groups with a positive 1-year rolling return crossed below 50% this week. The downward shift in momentum occurred after more than 80% of the groups had positive returns as recently as February.

When we assess the outlook for stocks after the number of sub-industry groups with a positive 1-year rolling return cross below 50% with a reset condition of 80%, we see that forward returns were poor, especially over the next 2-3 months.

Another worry? It triggered right before the last two 10% drawdowns in the S&P. 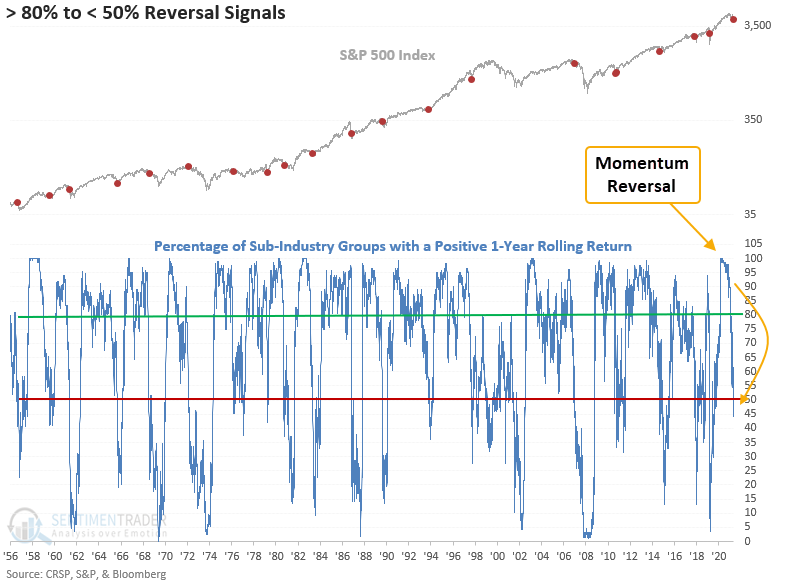