This is a "good idea" post, not investment advice. Veltex Corp's (VLXC) business is drug (primarily opioid) addiction rehab and treatment in West Virginia, one of the hotbeds for opioid addiction. On November 23, 2022, Veltex announced that in-patient services will start November 28, 2022. They also have out-patient services which just ramped up to 5 days a week. The demand for opioid rehab is HUGE in W.V. Please read the press release to learn more, the potential revenue numbers are great with good upside potential in the stock IMO. This is a .40 stock and like other penny stocks, speculative, do your due diligence before investing. I have had a position for a few years waiting for things to develop.

“I don’t want to be a doom and gloom person, but we’re probably about to see the worst of what’s about to happen.”      Evictions are piling up across the U.S. as Covid-era protections end and rents climb 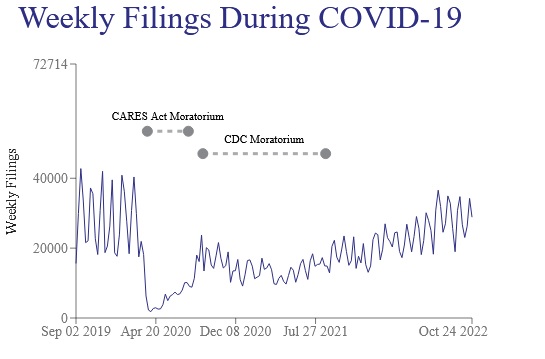 A CNBC poll in October found just 16% of voters believed the economy is “excellent” or “good,” and 59% of voters expect there will be a recession over the next 12 months.

San Francisco officials estimate as many as 20,000 people will experience homelessness at some point in the year 2022 — and for every one person housed by a city program, four more will become unhoused.

In June, rents were up 24% year over year, with a median asking rent of $2,261. In Maricopa County, which includes Phoenix, evictions are at their highest levels since at least 2016, with more than 45,000 filings this year.

One region that has seen the greatest increases in housing costs is Oklahoma City, where rents were up 24% in September compared to a year earlier and evictions have been steadily on the rise this year and are more than 40% above their pre-pandemic levels, with more than 1,800 evictions filed in September.

In Minneapolis, where rent increases have trended below the national average, evictions in September were 37% above their historical averages after shooting up in June, when the state lifted its eviction moratorium.

"One medical bill, one car repair can pretty quickly push someone towards an eviction.”

Those Waiting For The "PIVOT" Should Be Careful W... *If* this nearly perfect analog were to continue right from here, we would see a powerful upward explosion in VIX starting this next week and taking VIX some 500%+ into January 2023.

We Update Intraday Breadth and NYMO Data Several Times Daily @sevensentinels on Twitter. This data is available to any who may wish to follow us there. Special Offer: One Week of Seven Sentinels for One Dollar

Risk Windows for Week of 28 Nov & the General Hospita...

According to my risk summation system, the days this coming week or so with the highest chance of seeing a turn in or acceleration of the current trend in the DJIA are Tuesday November 29th and Friday December the 2nd through Monday December the 5th.

This past week the Monday the 21st high value risk window was a disappointment only tagging a minor low on the week's DJIA upward journey to Nirvana.  The jury is still out on the Friday the 25th risk window waiting for the action on Monday the 28th.  With the November 29th risk window coming so quickly on its heels, I don't hold out much hope for big things from this risk window either. 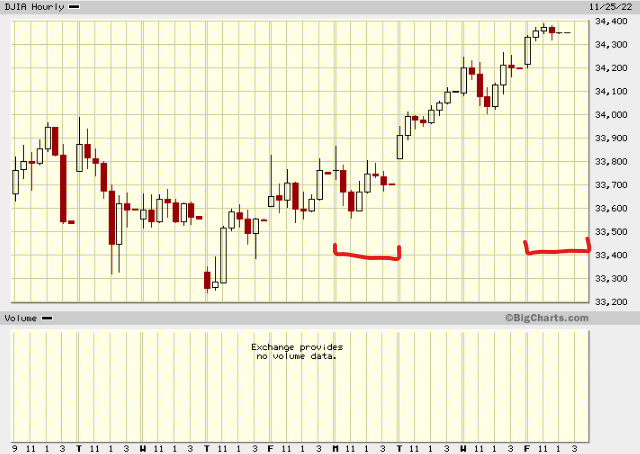 I put the Prosecco on ice this past Friday ready to pop a cork and celebrate a new bull market this coming week if the DJIA can just manage to tack on another 46 points thusly gaining 20% from the low on October 13th, although if my E-Wave count is correct, it won't be a long party with a correction expected soon.

Every bear market needs its Lehman & Madoff moments and we got the later in spades this past week with the FTX saga.  The Bank of England may have stepped in front of the Lehman event by restarting QE to bail out the UK pension system a few weeks ago.  It's hard to believe that there's not at least one more smelly shoe to drop given my expectations for another serious bear leg down sometime later in 2023.

Longer dated interest rates continued their sag down this past week further widening the long to short spread foretelling a recession, but you wouldn't know it from the stock market which, as shown above, marched north all week.  The Fed Head speaks this coming Wednesday and needs to rein in some of the giddiness given we're on the cusp of a new bull market declaration which would pump consumption hurting his inflation fight.

Speaking of inflation fights, the nurses here in the UK are in one with the government asking for a 19% pay rise and are for the first time ever threatening to strike.  This might seem like a lot for them to ask until you realize inflation here is running north of 10% and nurses are badly underpaid.  How badly you ask.  Well in London the average nurse salary is about £28,000 and the average home sells for about £680,000, so a nurse even married to another nurse could not qualify for a mortgage for an average house.  For all you soap fans, they would need to use the General Hospital solution and marry a doctor.  Since the NHS is also experiencing a severe doctor shortage, that's getting even tougher too, and since the current UK government strategy for dealing with inflation is heavily dependent on hope and luck, maybe that 19% is not all that unreasonable.