Still looking for some kind of low around July.6 - doesn´t have to be a lower low for the US...

Mrkt spoke loud and clear today, top spotter advanced to bear +5, trigger advanced we have a low in place. Now we look for the top spotter to double top near +20 next few weeks or so.

Anyone own IEP for Dividend Income

If so, what do you think of IEP holding long term for dividend income?

Risk Windows for the Week of June 27th and a Big Bag of M...

The risk summation system's forecast for next week is in a bit of a muddle due to the disperse distribution of the turn risks.  There is a cloud of risks with no day really standing out stretching from Monday the 27th through Wednesday the 29th and quite a sharp peak in risk stretching from Friday July 1st through Tuesday July 6th, so maybe something of interest will occur at the front half of next week and at the very end of the week trailing into early the following week.  The days with the highest system signal over this period are Friday July 1st and Tuesday the 5th, so they will constitute the "official" risk window.

Last week the Tuesday the 21st risk window did catch the low for the week and a turn up from the malaise at the end of the previous week, but the actual turn began the previous Friday, so this risk window was a bit of a dud.  The higher risk non-risk window that I also  noted running from noon on Thursday till Friday morning caught a very sharp rally. 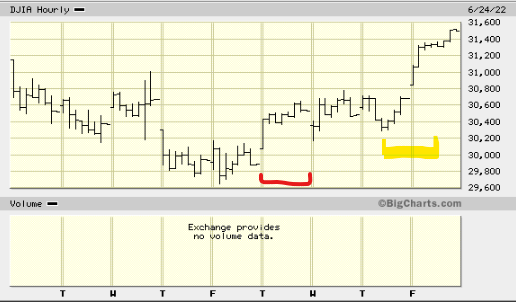 The end of the day turn up in the popular indexes this past Friday may have been quite telling since traders appeared to be suffering more from FOMO than arkoudaphobia in front of a weekend.  This new bullish behaviour is completely understandable given that interest rates have been falling now for a little more than a week and due to the FED increasing their balance sheet, not draining it, as can be seen in the broken trend line in the plot below from their website.  As I said in a post this week, they are still pumping like crazy.  To bastardize the words of Teddy Roosevelt, they talk tough and carry a big bag of money.

How this is going to reduce inflation is beyond me.  I continue to believe that the FED still thinks the surge in inflation is transitory, but they are afraid to say it out loud.  Talk tough, drag their feet on actually tightening credit and hope that inflation magically goes away due to some sort of cessation in the war would appear to be their current secret, not for public consumption, strategy.  Due to reduced demand caused by price increases, the next inflation numbers should be better looking than the past few.  This may be all the excuse the FED needs to pause in the fight.  The next real test of the FED will be at the end of next month when they are expected to bump the Funds rate another 3/4 percent to a still anemic 2.5%.  The plot below and the recent fall in leading market interest rates appear to be forecasting a lower bump in the rate, if any bump at all. 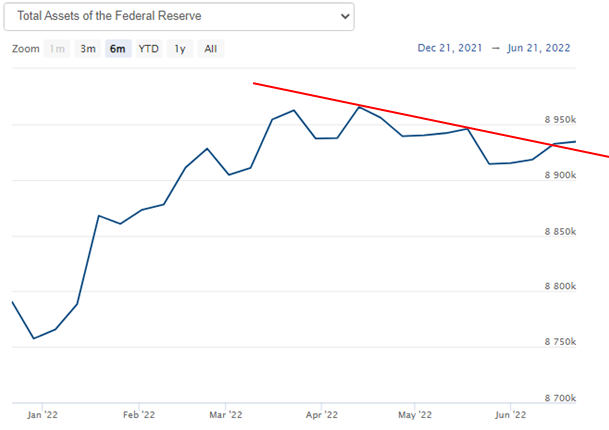 If the registration module isn't working for you, you can message us here or at admin@ this site and we'll set you up.

Remember, "Partially Long (or Short)" means less than your normal full position. E.g., If you typically use leverage, then 100% long would be "Partially Long".