Please disregard any influence that our weakening Sun may have on earth's climate and weather and it's effect on global health.

Solar activity does not fit the Globalist's agenda.

So much for the "World is on fire, in case you didn't notice (Boomer)" as "Expert" teenager Greata condescendingly says.

Déjà vu all over again as 2019 saw the all time low temperature for April 15! 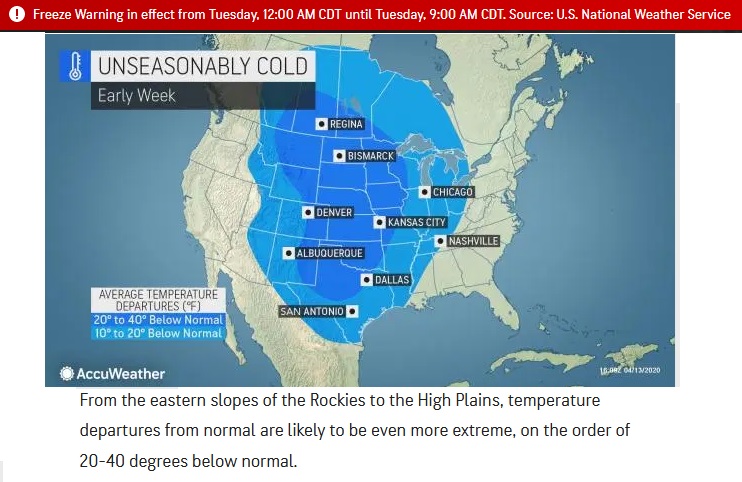 Well. We got that later than normal freeze again this April, messing with my garden.

Just like last year only even later in the month.

But this headline grabbed my attention today.

It doesn't tell the whole story... as usual.

A bit misleading in fact. Intentional? 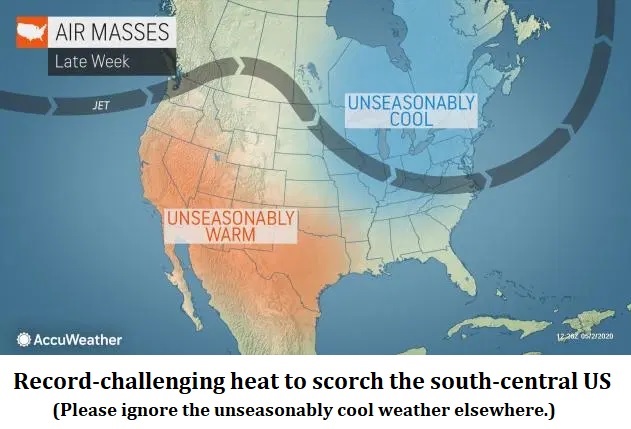 Greta Thurnberg is the lefts "science" expert. Models for climate change are about as good as the ones for COVID-19 = millions will die. If you believe that giving more money to Government will change the Climate - you have no business voting.

If you believe that giving more money to Government will change the Climate - you have no business voting.

Every one on the planet should be equally poor and living in squalid conditions.

Except for our "keepers" who are more equal than the rest of us.

They have the private jets necessary to combat evil CO2.

Everyone in the bread lines are equally hungry.

The book reflects events leading up to the Russian Revolution of 1917 and then on into the Stalinist era of the Soviet Union.

It was not a good time.

Animal Farm is an allegorical novella by George Orwell, first published in England on 17 August 1945. The book tells the story of a group of farm animals who rebel against their human farmer, hoping to create a society where the animals can be equal, free, and happy.

(Until the idealist pig takes over.) 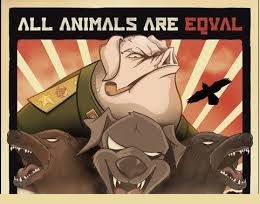 When it's hot, it's Global Warming Climate Chaos.
When it's cold it's... just weather...

Arctic blast set to punish Northeast with cold, May snow
May 6, 2020

Weather more fitting for early to mid-March is coming on like a freight train.

An unusually chilly spring is about to turn even more shocking as cold air, moisture and a visit from the polar vortex team up to trigger way out-of-season conditions for mid-May across portions of the Northeast.
Episodes of freezing temperatures are forecast for parts of the interior Northeast into the middle of May. 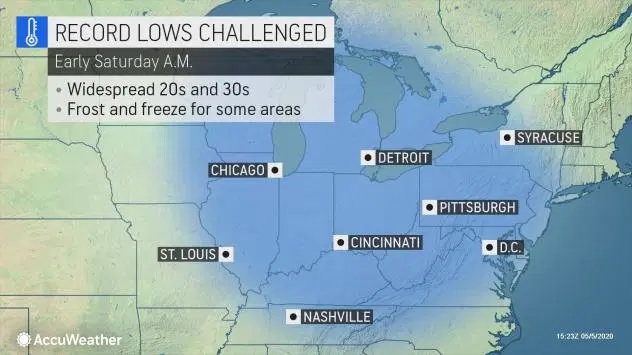 Yep - snow in the forecast for Maine this weekend.

‘Nerve-Racking and Very Unusual’: Snow in May Worries Growers

Across New York and New England, farmers and growers watched with worry on Saturday morning as a late season blast of Arctic air and even snow descended on fragile fruits and vegetables that had just begun to poke through.

“What we’re experiencing is nerve-racking and very unusual,” said Mike Biltonen, a pomologist who runs Know Your Roots, a small apple orchard.

The temperature in Worcester, Mass., fell to 30 degrees, breaking the previous record of 31 set on May 9, 1934, according to the National Weather Service.

Around the Finger Lakes, the temperature fell to 27 degrees overnight on Friday.

Meanwhile...One of the longest running climate prediction blunders has disappeared from the Internet (GOOGLE anyway)

(But you can still look it up on duckduckgo and wattsupwiththat.com. )

Readers of WUWT and millions of climate skeptics have read this article before, and in fact it is likely one of the most cited articles ever that illustrates the chutzpah and sheer hubris on display from a climate scientist who was so certain he could predict the future with certainty. Dr. David Viner of the Climatic Research Unit who famously said:

From the Independent’s most cited article (and now in the vapors): Snowfalls are now just a thing of the past by Charles Onians:

However, the warming is so far manifesting itself more in winters which are less cold than in much hotter summers. According to Dr David Viner, a senior research scientist at the climatic research unit (CRU) of the University of East Anglia,within a few years winter snowfall will become “a very rare and exciting event”.

“Children just aren’t going to know what snow is,” he said. 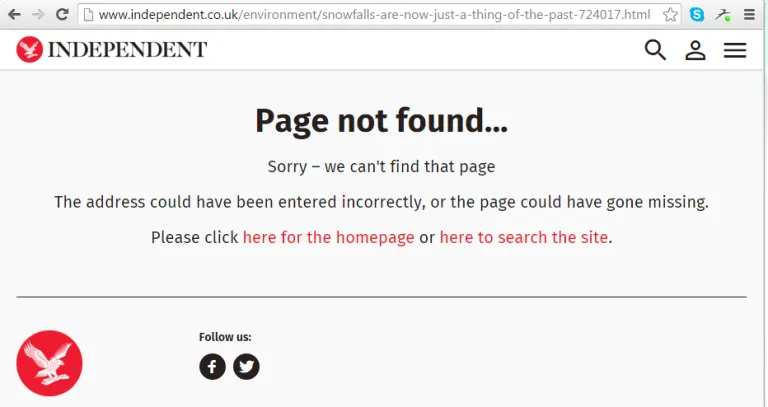 I call it "Climate Myopia"

Today's Chicken Littles have no knowledge of the past, so with every drop of rain, or lack thereof, they declare the sky is falling.

Ominous trend in American West could signal a looming "megadrought"

A team of scientists is researching megadroughts that have lasted as long as 40 years, using tree ring evidence going back 1,200 years.

"If they go back in time 500 years or so, there were these phenomenal droughts — in terms of both severity and in terms of length," Park Williams, the scientist leading the research, said. "And until recently, those droughts have always been spoken about with almost a mythical-type character."

Williams said the drought of the last two decades "developed the same way that the megadroughts did."

Now we just use the autistic ones as shills.

Some 500 years ago, the Chimú in what is now Peru ritually killed hundreds of their young in the largest mass child sacrifice events known in world history
Exclusive: Ancient Mass Child Sacrifice in Peru

What made Peru's Chimú people sacrifice their own children?

Both the Spanish Flu and Covid 19 appear at the end of historically weak Solar Cycles!

Scientists warn of freezing weather, famine and earthquakes as sun goes into 'lockdown'

As the world is on lockdown to control the coronavirus pandemic, the sun is going through its own lockdown and it enters a period of "solar minimum" and its activity decreases
We could be entering one of the deepest period of sunshine recession which could trigger long periods of cold, famine and other issues.

Astronomer Dr Tony Phillips said: “Solar Minimum is under way, and it’s a deep one.
“Sunspot counts suggest it is one of the deepest of the past century. The sun’s magnetic field has become weak, allowing extra cosmic rays into the solar system.
“Excess cosmic rays pose a health hazard to astronauts and polar air travellers, affect the electro-chemistry of Earth’s upper atmosphere, and may help trigger lightning.”

The world could suffer from famine as temperatures plummet by up to 2C over 20 years.
“So far this year, the Sun has been blank 76% of the time, a rate surpassed only once before in the Space Age. Last year, 2019, the Sun was blank 77% of the time.

"Two consecutive years of record-setting spotlessness adds up to a very deep solar minimum, indeed.”
NASA scientists fear a repeat of the 1790 and 1830 "Dalton Minimum" which led to a period of intense cold and powerful volcanic eruptions.
That sun recession led to a devastating volcanic eruption in 2,000 years in 1816 in Indonesia, which killed 71,000 people.

The world could suffer from famine as temperatures plummet by up to 2C over 20 years
Although the last solar minimum occurred in 2013-2014, it was ranked among the weak.
LINK

Earth's magnetic field, which is vital to protecting life on our planet from solar radiation, is mysteriously weakening.

On average the planet's magnetic field has lost almost 10% of its strength over the last two centuries, but there is a large localised region of weakness stretching from Africa to South America.

Known as the South Atlantic Anomaly, the field strength in this area has rapidly shrunk over the past 50 years just as the area itself has grown and moved westward.

Over the past five years a second centre of minimum intensity has developed southwest of Africa, which researchers believe indicates the anomaly could split into two separate cells.

The anomaly is causing technical difficulties for satellites orbiting the Earth.

One speculation is that the weakening of the field is a sign that the Earth is heading for a pole reversal - in which the north and south magnetic poles flip. 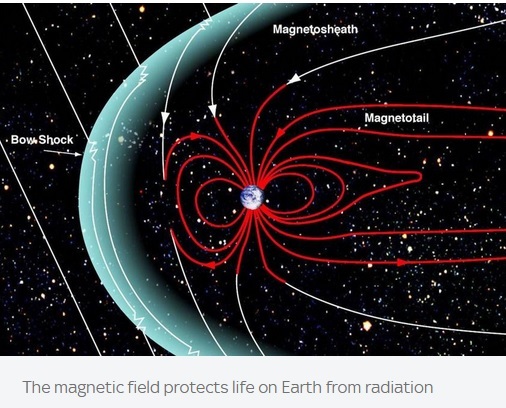