Today's Tragic Climate Headlines that you will not hear on tonight's main-scare news:

La Niña “to bring another overall mild winter for much of the eastern U.S."

La Niña is a phenomenon in which the surface water near the equator of the Pacific Ocean is cooler than normal." 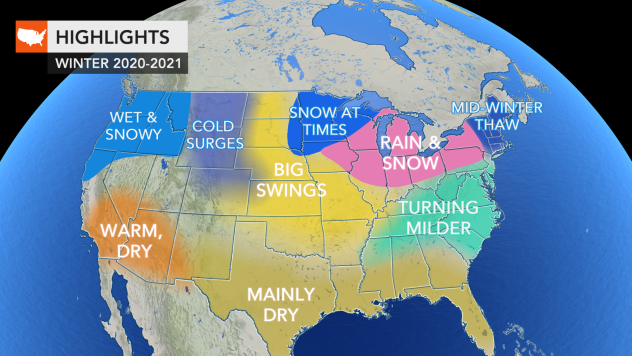 “Children just aren’t going to know what snow is."

According to Dr David Viner, a senior research scientist at the climatic research unit (CRU) of the University of East Anglia, within a few years winter snowfall will become “a very rare and exciting event”. “Children just aren’t going to know what snow is,” he said..

Ten years later,  England and Western Europe had three very cold winters in a row, and the UK experienced its coldest December since records were kept.

An early-season snowstorm blasted several northern states with significant snowfall on Tuesday, with accumulations in Minnesota's Twin Cities shattering a record that had stood since Theodore Roosevelt's second term as president. 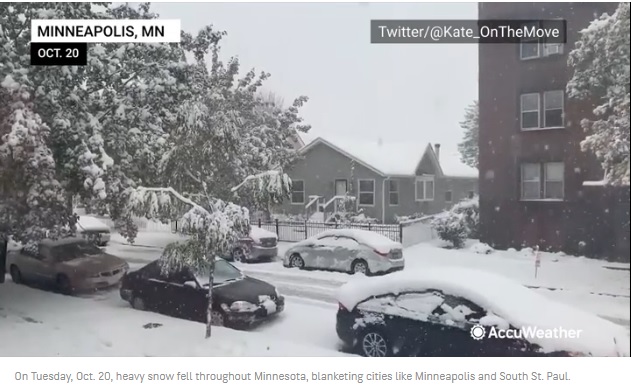 Arctic outbreak poised to demolish records, usher in snow unusually far to the south
AccuWeather
Oct. 21, 2020
An Arctic outbreak even more extreme than one felt in early September is expected to race southeastward from the northern Rockies Friday night to the southern Plains by next Monday that could deliver temperature departures from average of 30-40 degrees Fahrenheit. 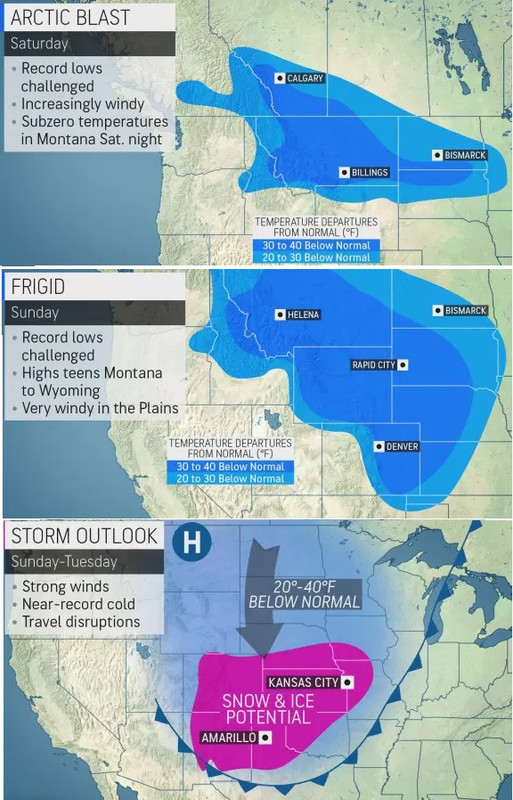 Temperature analysis shows UN goals 'within reach' but only if China and it's puppet the U.N. can destroy America's economy.

"These kings have one purpose: to yield their power and authority to the U.N. beast. No one can buy sell or trade unless they submit to the agreements."

The Climate Action Tracker group looked at new climate promises from China and other nations, along with the carbon plans of US President-elect Joe Biden.
Tackling climate change is a major part of his agenda. He has promised to bring the US to net zero emissions by 2050. That move would reduce global temperatures by 0.1C by 2100.
"There are countries that still remain bad actors, including Saudi Arabia, Brazil, Australia, Russia, and a few others, but there's much to be concerned about. And there's much that can go wrong."

After the failed Copenhagen summit in 2009, the group estimated that global temperatures would rise by 3.5C by the end of this century.
But they were wrong again.

Climate Myopia and ignorance void of "science" and history are essential to promote political agendas:

We have all been told that sea levels are rising but could Florida sinking (again)?

Throughout most of its history, Florida has been under water.

Portions of the Florida peninsula have been above or below sea level at least four times.

Are the volcanic calderas causing Baia Rome to rise again? 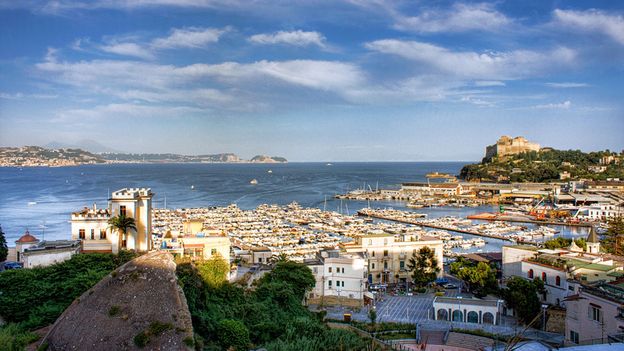 More than 2,000 years ago, Baia was the Las Vegas of the Roman Empire. Then it sank into the ocean.

But recently it has been rising from the sea floor!

Are sea levels falling or are mountains rising?

Is volcanic activity part of the mix?

Are tectonic plates shifting or are agenda driven politicians shifty?

The reason why the newly agreed figure may be temporary is because the 2,900km-long Himalayan chain is located on, and was formed by, the uplift caused by the colliding Indian and Eurasian tectonic plates, which are continuing to push up the Himalaya at an average of 1cm every year.

Meanwhile, back in Rome...

..."underground pressure has caused the land surrounding Baia to continuously rise and fall, pushing the ancient ruins upwards towards the sea’s surface before slowly swallowing them again.

Because of the undulation of the Earth’s crust, these ruins actually lie in relatively shallow water, at an average depth of 6m, allowing visitors to see some of its eerie underwater structures from a glass-bottomed boat.

“Children just aren’t going to know what snow is,” Dr. David Viner, a scientist with the climatic research unit at the University of East Anglia, told the UK Independent in 2000.

A widespread swath of heavy snowfall is likely from the central Appalachians and interior Mid-Atlantic into parts of the Northeast. 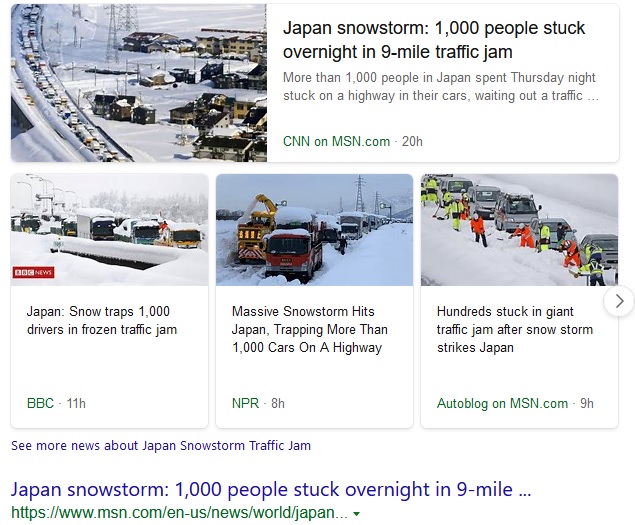 Kansas City, Missouri, is likely to be hit hard by both a buildup of ice and then a moderate to heavy amount of snow.

This second part of the storm is not only forecast to bring a new round of snow, ice and rain to the Central states, but also produce icy conditions in the Northeast and a round of flooding rain and severe thunderstorms that advances eastward across the Southern states into the end of the week.

"Oh my god, I've never seen snow, this is my first time seeing snow, or touching it because in Arizona there's nothing but desert," she said.

Need some of this record snow to hit here in the CO mountains. My local place still hasn't really opened up much above intermediate runs.  Usually pretty much everything's open by this time of year. :\

It sees to be different ever year.

Recently some ski resorts were open in JULY!

One year I went skiing in Durango in the middle of winter in a swim suit.

There were only 5 trails open and it was all man-made snow.

Back home, the high for the day never got above the teens! 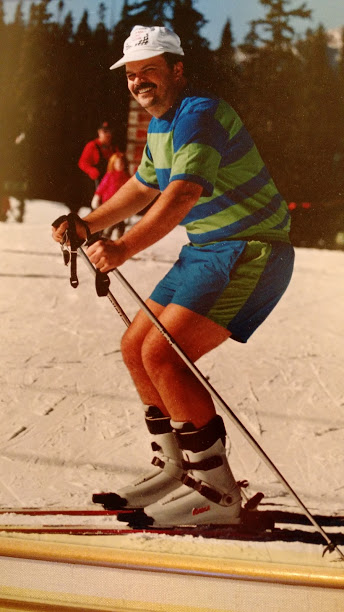 May 21, 2019
Denver Sees Biggest Late May Snow In 44 Years
Only several days ahead of Memorial Day weekend -- the unofficial start of summer -- heavy snow pounded the Denver area Monday evening into Tuesday morning.

Sierra Blizzard Drops So Much Snow That Ski Resorts Close!

“Wow! Low and behold 101 inches for the month is extraordinary,”’ said Hurlbert.That’s almost 8½.5 feet (2.5 meters) – in just the month of March.I thought Colorado ski resorts were supposed to be out of business by now. Instead, they get one of the biggest March snowfall amounts on record.